Marita Noon
|
Posted: Aug 23, 2016 12:01 AM
Share   Tweet
The opinions expressed by columnists are their own and do not necessarily represent the views of Townhall.com. 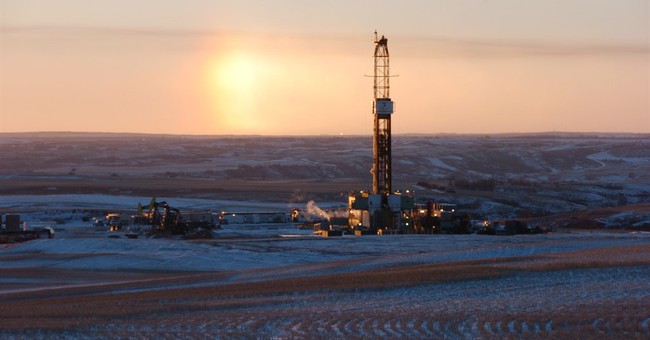 What is the “biggest unfinished business for the Obama administration?” According to a report from Bill McKibben, the outspoken climate alarmist who calls for all fossil fuels to be kept in the ground, it is “to establish tight rules on methane emissions”—emissions that he blames on the “rapid spread of fracking.”

McKibben calls methane emissions a “disaster.” He claims “methane is much more efficient at trapping heat than carbon dioxide” and that it does more damage to the climate than coal. Methane, CH4, is the primary component of natural gas.

To buttress his anti-fracking argument, McKibben is selective on which studies he cites. He starts with a paper from “Harvard researchers” that shows increased methane emissions between 2002 and 2014 but doesn’t pinpoint the source of the methane. He, then, relies heavily on “a series of papers” from known fracking opponents: Cornell Scientists Robert Howarth and Anthony Ingraffea. Within his report, McKibben mentions Howarth’s bias, but, I believe, intentionally never mentions Ingraffea’s. Earlier this year, in sworn testimony, Ingraffea admitted he’d be lying if he said that every one of his papers on shale gas was “entirely objective.”

Because of bias, McKibben claims to reach out to an “impeccably moderate referee”: Dan Lashof. Mckibben then goes on to report on Lashof as having been “in the inner circles of climate policy almost since it began.” In addition to writing reports for the Intergovernmental Panel on Climate Change and crafting Obama’s plan to cut “coal plant pollution,” Lashof now serves as COO for billionaire Tom Steyer’s NextGen Climate America. Lashof is hardly an “impeccably moderate referee.”

Because McKibben goes to great lengths trying to appear balanced in his conclusions, a casual reader of his report might think the research cited is all there is and, therefore, agree with his cataclysmic views. Fortunately, as a just-released paper makes clear, much more research needs to be considered before cementing public policy, such as the Environmental Protection Agency’s “tight rules on methane emissions.”

In the 28 peer-reviewed pages (with nearly 70 footnotes) of Bill McKibben’s terrifying disregard for fracking facts, Isaac Orr, research fellow for energy and environment policy at The Heartland Institute, states: “Although McKibben—a journalist, not a scientist—accurately identifies methane as being exceptionally good at capturing heat in Earth’s atmosphere, his ‘the-sky-is-falling’ analysis is based on cherry-picking data useful to his cause, selectively interpreting the results of other studies, ignoring contradicting data, and failing to acknowledge the real uncertainties in our understanding of how much methane is entering the atmosphere. In the end, methane emissions aren’t nearly as terrifying as McKibben claims.”

In the Heartland Institute Policy Brief, Orr explains why it has been difficult to achieve consistent readings on methane emissions: “Tools have been developed only recently to measure accurately methane emissions, with new and better equipment progressively replacing less perfect methods.”

Throughout the section on methodology, Orr draws attention to the results of the various techniques—which he says shows “great uncertainty about how much methane is entering the atmosphere, how much is produced by oil-and-natural gas production, and how emissions can be managed in the future.” He also points out that more than 75 studies examining methane emissions from oil and gas systems have been done, yet “McKibben chose an outdated study [Howarth/Ingraffea] that used unrealistic assumptions and reached inaccurate conclusions.”

Orr calls McKibben’s assertions that methane emissions are from the oil-and-gas sector: “simplistic” and “inappropriate.” Regarding the Harvard study, he explains: “Estimating the contributions from different source types and regions is difficult because there are many different sources of methane, and those sources overlap in the same spatial area. For example, methane is produced naturally in wetlands. Methane also is produced by agriculture through growing rice and raising livestock, fast-growing activities in developing countries. This makes it difficult to calculate exactly where methane is coming from and what sources should be controlled.”

Based on McKibben’s approach, other sections of the Heartland report include: Methane and Global Warming, Repeating Gasland Falsehoods, and What’s the Fracking Alternative?

A careful read of McKibben’s statements reveals that he is aware that his plan will take away one of the few economic bright spots; that due to higher priced electricity, manufacturing jobs will leave our shores; and coal regulations will be unpalatable.

I am often asked why the anti-fossil fuel crowd has so recently turned against the decades-old technology of hydraulic fracturing, or fracking, that has provided such economic and environmental benefits and has become even safer due to ever-increasing advances. In his report, McKibben states what is essentially the answer I often give: “One of the nastiest side effects of the fracking boom, in fact, is that the expansion of natural gas has undercut the market for renewables.” It has upset the entire world-view of people like McKibben who’d banked on oil and natural gas being scarce—and therefore expensive. In that paradigm, wind and solar power would be the saviors. Now they are an expensive redundancy.

Worrying about whether methane emissions come from oil-and-gas activities, from agriculture, such as cow flatulence or rice farming, or from naturally occurring seeps may seem irrelevant to the average energy consumer’s day. However, when you consider that long-term, expensive public policy is being based on this topic, it is important to be informed fairly and accurately—and to communicate with your elected officials accordingly.