Trying to Make Winners out of Losers

Marita Noon
|
Posted: Mar 21, 2016 12:17 PM
Share   Tweet
The opinions expressed by columnists are their own and do not necessarily represent the views of Townhall.com. 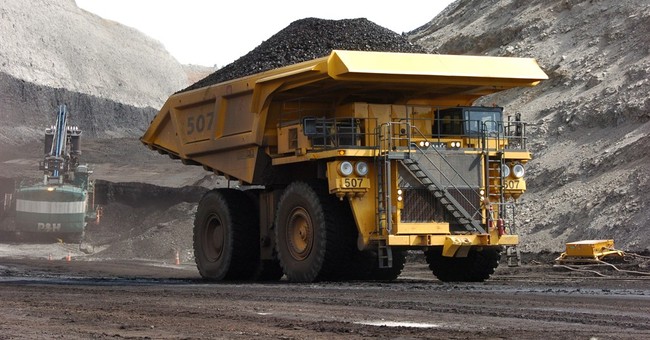 By now, most people probably know about one of Secretary Hillary Clinton’s biggest campaign

I wasn’t the only one shocked by the uncharacteristic clarity of her statement. Lacking the usual political-speak, her comments were all the more surprising in that they were not made at a fundraiser in billionaire environmental donor Tom Steyer’s posh San Francisco living room. They were made in Ohio—coal country, where coal production in 2015 was down 22 percent—at a nationally televised CNN town hall and just hours before the important state’s primary election.

In response, Christian Palich, President of the Ohio Coal Association sent this: “Hillary Clinton’s callous statements about coal miners, struggling under the weight of a hostile administration, are reprehensible and will not be forgotten. The way Secretary Clinton spoke so nonchalantly about destroying the way of life for America’s coal families was chilling. Come tomorrow, or next November, Ohioans in coal country will vote to keep their jobs and not for the unemployment line.”

US News reports that Democrats in the coal states of Wyoming, West Virginia, Kentucky, and Ohio have tried to “distance themselves from Clinton’s comments.” Former Ohio Governor Ted Strickland, a Clinton ally who handily won his party’s primary election for Senator, called her slip, “unartful.” Senator Joe Manchin (D-WV), who, last April, endorsed Clinton, took issue with her comments and contacted her campaign.

Facing the backlash, and in damage-control mode, Clinton sent a letter to Manchin: “Simply put, I was mistaken.”

But was she? I don’t think so.

Though her comments may have been “unartful” and, arguably, poorly timed, I believe they reflect private conversations and campaign strategy. It may be no coincidence that rumors of President Obama’s tepid support for Clinton—though the White House denies endorsing her—surfaced after her killing coal comments.

First, it is clear that Clinton needs President Obama’s endorsement. She needs him to generate excitement for her lackluster campaign—something Democrat voters are not feeling for her as they did for him. She needs his campaign machine to get out the votes.

But, he needs her just as much—his legacy hangs on her election. Because so much of what he’s done has been by executive action, his legacy can just as easily be undone—as every remaining Republican candidate would likely do. Obama is, reportedly, committed to “a hard campaign of legacy preservation.” He is ready to “raise money to fill Democratic coffers and target the key communities that would make up a winning coalition for the party, including blacks, Latinos, educated single women and young voters, to encourage them to go to the polls.”

While Obama frequently claims to support an “all of the above” energy policy, actions speak louder than words. From his 2009 stimulus bill throwing billions at speculative green energy projects, his killing coal efforts, his stand that we can’t drill our way to low gas prices, his rejection of the Keystone pipeline, and his threat to veto a bill to lift the oil export ban—just to name a few—he obviously meant “none of the below.”

The White House denies a “war on coal.” In December, after the Paris climate agreement was signed, former Deputy Assistant to the President for Energy and Climate Change, Heather Zichal,

Bill Bissett, President of the Kentucky Coal Association called Zichal’s comments: “insulting and inaccurate.” He told me: “The Obama Administration and its allies have an intentional blind spot to the economic and social damage that their anti-coal policies are causing in the United States and especially in coal country. The top coal producing states in our nation not only benefit from the extraction of coal, but all of us benefit greatly from having low kilowatt-per-hour rates. But that economic advantage is eroding as Obama does everything in his power, and against the will of Congress, to move the United States away from coal production and use.” He added: “More than 8,000 Kentucky coal miners have lost their jobs since Obama took office and countless other Kentuckians have lost their livelihoods through indirect and induced job loss due to his anti-coal agenda. And, yes, our electricity rates are increasing in Kentucky as our country moves away from coal.”

“Ms. Zichal and the administration can spin it anyway they like but no one outside of their fringe enviro friends is clamoring for their energy policies,” said Mike Duncan, President of the American Coalition for Clean Coal Electricity.

While much of the electricity price increases associated with the Obama Administration will only be seen later, the fact is, according to an Energy Information Agency data set, the increase in retail electricity prices since 2008 is 12.8 percent.

Clinton’s anti-coal comments got all the press. But she didn’t stop there. Almost under her breath, a few sentences later, she added: “We’ve got to move away from coal and all of the other fossil fuels”—more pandering for Obama’s much needed (and, so far, withheld) endorsement.

But how realistic is the Democrat’s goal of moving away from coal and all the other fossil fuels?

“Unlikely,” according to new research from the University of Chicago. The authors wanted a different answer. Like Clinton, and Obama, they believe fossil fuel use is driving “disruptive climate change” that will lead to “dramatic threats to human well-being” and a “dystopian future.” Reading the 22 pages of the report on their findings, one can almost feel their dismay.

Yet, after discussing “supply theory”—which posits the world will run out of inexpensive fossil fuels—they state: “If the past 35 years is (sic) any guide, not only should we not expect to run out of fossil fuels anytime soon, we should not expect to have less fossil fuels in the future than we do now. In short, the world is likely to be awash in fossil fuels for decades and perhaps even centuries to come.” Complicating matters, the authors acknowledge: “a substantial penetration of electric vehicles would reduce demand for oil. Provided that the supply curve for oil is upward sloping (as it is in almost all markets), this drop in demand would translate to lower oil prices, making gasoline vehicles more attractive.”

Then, on “demand theory”—the economy will stop demanding fossil fuels as alternatives become more cost competitive—they lament: “In the medium-run of the next few decades, none of these alternatives seem to have the potential based on their production costs (that is without the government policies to raise the costs of carbon emissions) to reduce the use of fossil fuels below these projections.” Additionally, they conclude: “Alternative sources of clean energy like solar and wind power, which can be used to both generate electricity and to fuel electric vehicles, have seen substantial progress in reducing costs, but at least in the short- and middle-term, they are unlikely to play a major role in base-load electrical capacity or in replacing petroleum-fueled internal combustion engines.”

While the authors support “activist and aggressive policy choices…to drive reductions in the consumption of fossil fuels and greenhouse gas emissions,” they reluctantly admit the proposed solutions are not apt to be the answer they seek. “Even if countries were to enact policies that raised the cost of fossil fuels, like a carbon tax or cap-and-trade system for carbon emissions, history suggests that technology will work in the opposite direction by reducing costs of extracting fossil fuels and shifting their supply curves out.”

Perhaps, before Clinton—who accuses anyone who doesn’t agree with her climate alarmist view as ignoring the science—makes mistakes, like declaring that she’ll put coal miners and coal companies out of business, she should check the science behind her claims to “move away from coal and all the other fossil fuels.”

Making her March 13 comments seem even more foolish, the following days cast a shadow over the specter of funding more speculative solar power, as she’s proposed to do. Three stimulus-funded solar failures made big headlines.

On Wednesday, March 16, the Wall Street Journal (WSJ) announced that the massive $2.2 billion ($1.5 billion in federal loans according to WSJ, but other research shows

On the same day, SunEdison’s troubles worsened. After the company acquired

The next day, March 17, the New York Times declared that Abengoa, the Spanish company hailed as “the world leader in a technology known as solar thermal, with operations from Algeria to Latin America” has gone from “industry darling to financial invalid.” I’ve written repeatedly on Abenoga—which is on the verge of becoming “the largest bankruptcy in Spanish corporate history.” Note: Abengoa was the second largest recipient of U.S. taxpayer dollars—more than

It appears Clinton’s energy policies are aimed at trying to make winners out of losers. How can she help it? That is what the Democrat Party is trying to do with her.

Hopefully, voters know better. But then, as the University of Chicago’s study’s closing words remind us: “hope is too infrequently a successful strategy.”