Thanks to Fracking USA Rises to Number One in Energy; Thanks to Obama, We Won't Stay There 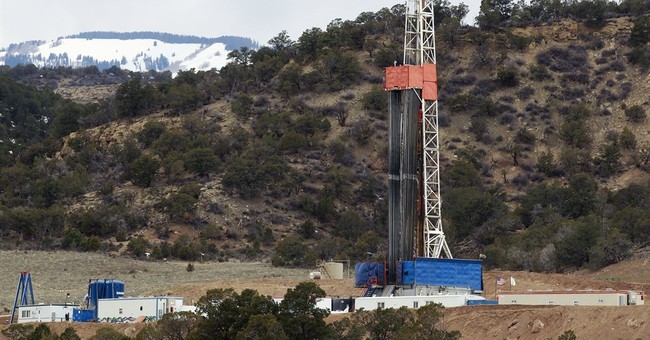 On the very same day that the Wall Street Journal (WSJ) announces: “US Rises to No. 1 Energy Producer”—thanks to the shale boom made possible through a technology known as hydraulic fracturing—an environmental group released a report calling for a complete ban of the practice, which would effectively shut down the oil-and-gas industry (and all of the jobs and revenues it creates) and increase dependence on foreign oil. Coincidence? I don’t think so.

You probably haven’t heard about either, as most news coverage, on October 3, centered on the government shutdown—eclipsing all else.

Why would Environment America choose to release a report, that they call “the first to measure the damaging footprint of fracking,” on a day when it would likely receive little attention? The answer is found in the WSJ: “the shale boom’s longevity could hinge on commodity prices, government regulations and public support.” (italics added)

Americans support the concept of energy independence. We don’t like the fact that we’ve been funding terrorists because we buy oil from people who hate us and who happily slaughter our citizens.

The Obama Administration is the most anti-fossil-fuel in history, yet within the past month, three Obama cabinet members—two former, one current—have declared fracking a safe technology for extracting oil and natural gas:

·At a speech in Columbus, Ohio, former Secretary of Energy Steven Chu said that fracking “is something you can do in a safe way” and dismissed a study critical of fracking by saying: “we didn’t think it was credible.”

·At the Domenici Public Policy conference in Las Cruces, New Mexico, former Secretary of the Interior Ken Salazar stated: “I would say to everybody that hydraulic fracking is safe.”

·In a meeting with the NY Daily News editorial board, Secretary of Energy Ernest Moniz asserted: “Fracking for natural gas is climate-friendly, environmentally safe and economically stimulating” and added: “Which is just what America and New York need.”

Then, in the same month, in the greenest state of the Union, against strong opposition, California Governor Jerry Brown signed a hotly-contested bill that reflects the fact that he favors some level of fracking.

These pro-fracking news items, along with several recent reports pointing to the safety of hydraulic fracturing, have the anti-fracking crowd resorting to desperation. And, then the WSJ announces America’s energy dominance on its front page. I suspect that Environment America had their little report ready to go and were just waiting for the right time to release it—probably after the shutdown, when the news cycle had some space. But, when the WSJ heralded the US energy comeback, they just had to spring it—hoping to shift public opinion.

The environmentalists’ advertising efforts have had an impact—even though, as Secretary Chu noted, the anti-fracking argument isn’t “credible.” A September Pew Research Center for the People and the Press found that opposition to increased use of fracking rose to 49% from 38% in the previous six months.

Why, when hydraulic fracturing has brought America to the brink of energy independence, been the biggest driver of job growth, lowered utility bills, and positively impacted the trade deficit, are people opposed to it? Because they don’t really know what it is, and, therefore, are gullible to the old adage: “If you tell a lie big enough and keep repeating it, people will eventually come to believe it.”

A University of Michigan report on hydraulic fracturing found: “The public tends to view the word ‘fracking’ as the entirety of the natural gas development process, from leasing and permitting, to drilling and well completion, to transporting and storing wastewater and chemicals.” In fact, fracking is limited to the process of injecting fluids into a well—just a few days of a multi-month operation (not counting leasing and permitting).

This widespread misunderstanding explains why the repeated lies have taken hold.

One of the most rampant lies about fracking made by the environmentalists is about water. The press release about the “fracking by the numbers” report, claims: “Of particular concern are the billions of gallons of toxic waste created from fracking, which threaten the environment, public health and drinking water.”

On page 5, Fracking by the Numbers states: “Fracking operations have used at least 250 billion gallons of water since 2005.” Which sounds ominous until you get some perspective. For example, over that same period, car washes have used more than twice as much water: 600+ billion gallons. In the state of Colorado, where water supplies can be constrained and oil-and-gas development is high, water used for fracking amounts to less than one-tenth of one percent of the state’s total water demand.

Also on page 5: “While most industrial uses of water return it to the water cycle for further use, fracking converts clean water into toxic wastewater, much of which must then be permanently disposed of, taking billions of gallons out of the water supply annually.” And: “Farmers are particularly impacted by fracking water use as they compete with the deep-pocketed oil and gas industry for water, especially in drought-stricken regions of the country.” These statements are just plain false. The oil-and-gas industry is now often using water that is not suitable for farming or drinking and then reusing the water over and over.

Mike Hightower, a hydrologist at Sandia National Labs adds: “Five years ago fresh water was used for each frac job, now they are using frac fluids that are 5 times saltier than sea water. That allows more reuse of waters, and is putting less strain on water resources in many western states.”

Dexter Harmon, Exploration Manager at Fasken Oil & Ranch, says they are using 88 percent produced water and Santa Rosa water that has been treated to remove harmful components and 12 percent fresh water to frac their Wolfberry wells near Midland, Texas. It cost about $1.75-$2.00/barrel to treat the produced water to get it ready to re-use on a frac job.

Plus, the industry is continually being revolutionized by technological advances. For example, GE has a new energy-efficient process that could cut the cost of water treatment in half, eliminate the need to transport the water for treatment, and decrease the chances of spills. MIT Technology Review, September 24, 2013, reported: “Based on pilot-scale tests of a machine that can process about 2,500 gallons of water per day, GE researchers say they are on track to cut the costs of treating salty fracking wastewater in half. The system needs to be scaled up for commercial use, but a full-sized system could treat about 40,000 gallons per day.”

Another lie repeated in the report (page 9): “There are ‘more than 1,000 cases’ of groundwater contamination.” Yet, the three major investigations of water contamination that were conducted by the EPA—Pavillion, Wyoming, the Range Resources case in Texas, and Dimock, Pennsylvania (made famous by the Gasland movie)—have all been cleared.

Additionally, three different environmentally aligned Obama administration members have made statements regarding an absence of evidence of fracking contaminating groundwater:

·At an August 1 breakfast, Energy Secretary Ernest Moniz, stated: “To my knowledge, I still have not seen any evidence of fracking per se contaminating groundwater.”

·Ken Kopocis, President Obama’s nominee to be Assistant Administrator for the EPA’s Office of Water, was asked recently in testimony before Congress if he was aware of any cases of groundwater contamination from hydraulic fracturing. His answer? “No I am not.”

·Lisa Jackson, President Obama’s former EPA chief, said: “In no case have we made a definitive determination that the [fracturing] process has caused chemicals to enter groundwater.” This comment follows her previous testimony before Congress, when she explained that she is “not aware of any proven case where [hydraulic fracturing] itself has affected water.”

We could go on picking apart the 47-page report, but these lies, untruths, and deceptions on water give you the idea. Energy In Depth has a more thorough review of Environment America’s “Fracking by the Numbers,” in which they call the anti-fracking group “professional activists bent on preventing responsible energy development from taking place.”

The budget they have to produce propaganda and advertising campaigns to change public opinion seems unlimited. Environment America’s IRS Form 990 for fiscal year ending 06-30-2011, shows it has 210 employees with revenues of $3.7 million. In the acknowledgements, Environment America thanks the “Park Foundation for making this report possible”—The Park Foundation funded the anti-fracking movie Gasland and other anti-fracking activities. And they call the oil-and-gas industry “deep-pocketed.”

Thanks to hydraulic fracturing America is on the brink of energy independence, it has provided the biggest driver of job growth, lowered utility bills, and positively impacted the trade deficit, yet one small, well-funded, and vocal segment of the population is opposed to it—using false scare tactics to sway pubic opinion. When you think about why they would want to ban this single, effective economic stimulus, it should make you shudder and cause you to commit—with me—to spreading the truth.