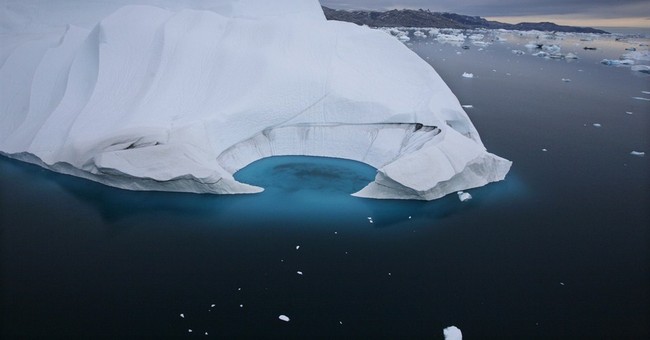 For 125 years, National Geographic has enjoyed a reputation as a scientific and educational organization. It is so trusted that if a topic is covered within the pages of National Geographic, it has been accepted without question. Most of us grew up reading it in the classroom, and later, in the doctor’s office.

So what were they thinking when they chose to feature a nearly submerged Statue of Liberty on the cover of the September issue? Obviously, by using scare tactics and fear mongering, the editors have bought into the propaganda of man-made climate change. They are frantically trying to gin up support and make believers out of those who are agnostic toward the politically driven agenda.

Public support for the alarmist position has virtually disappeared. The American public indicates that dealing with global warming shouldn’t be a priority for the US. Pew Research reports: “This year, it ranks at the bottom of the 21 tested.”

Earlier this year, the price of carbon on Europe’s Emissions Trading Scheme (the only EU-wide environmental instrument) collapsed. The Economist reported: “The emerging network of global carbon trading and European climate policy as a whole could sink” and concluded: “policymaking will shift more to the national level.” Europe’s largest companies complained “that the ETS is imposing higher costs on them.”

Europe was an early adapter to policies aimed at curbing greenhouse gas emissions believed to cause global warming. Now, European Energy Commissioner Günther Oettinger is advising against them. Recently, he warned: “Industrial players could leave Europe to relocate elsewhere.” He specifically cautioned Germany against unilaterally overexposing itself to climate protection efforts.

Further driving the nail into the climate change coffin, Australia just elected Tony Abbott as its new Prime Minister. Abbott campaigned on a promise “to scrap an unpopular tax on carbon emissions.”

The popular and economic demise of climate change schemes has left the believers desperate to reclaim their high ground—and National Geographic became the surrogate. After all, if it is in the National Geographic, it must be true.

Jerry wants to believe the man-made side of the climate change debate, but still had questions. After seeing the story in National Geographic, it was all settled in his mind. He said: “Everything I read suggests that the vast majority of credible scientists consider global warning both real and a serious threat. Take a look at the current National Geographic.”

Let’s “take a look” at the Rising Seas cover story.

With the historically sound reputation of the National Geographic organization, readers should be outraged by the cover—which has Lady Liberty up to her thighs in water. From ground to torch, the Statue of Liberty is 305 feet tall. The base is 154 feet and the statue is 151. The graphic has the water almost to her waist, so we can easily assume a rising sea level of 200-250 feet—which the author, Tim Folger, calls “inexorably rising seas.” Yet the text, repeatedly suggests much lower numbers. In one place, he acknowledges that over the past century the earth has warmed by “more than a full degree over the past century”—which you know has to be only fractionally more than a degree. Given the propensity to hyperbole, if it was even slightly more than 1.5 degrees, Folger would have claimed “nearly 2 degrees.” Yet, the massive one-degree increase has caused the seas to rise “by about eight inches.” Hardly something to get alarmed about. In another, Folger writes: “many think sea levels will be at least three feet higher than today by 2100.” He adds: “Last year an expert panel convened by the National Oceanic and Atmospheric Administration adopted 6.6 feet (two meters) as its highest of four scenarios for 2100.”

Despite the predictions of sea rise, Folger dedicates a full page to the Netherlands and its ability to adapt. He reports: “The country has been reclaiming land from the sea for nearly a thousand years. … Sea-level rise does not yet panic the Dutch.”

Of course, “our fossil-fuel driven civilization” is to blame. Folger claims: “Unless we change course dramatically in the coming years, our carbon emissions will create a world utterly different in its very geography from the one in which our species evolved.” But then contradicts himself when he states: “In May the concentration of carbon dioxide in the atmosphere reached 400 parts per million, the highest since three million years ago. Sea levels then may have been as much as 65 feet above today’s.” Folger later adds: “50 million years ago … the planet was ice free.” He cites that at that time, carbon concentrations were “around a thousand parts per million.” It must have been the SUVs.

Another of his many contradictions is about the storms and the potential flooding. Folger starts off with a story about super-storm Sandy—calling it “a preview of the future.” But then he quotes a woman, Kate Orff, whose only listed credential is that she has a landscape architectural firm located in a 16th floor loft with the “present day harbor shimmering outside her window.” She explains that the “archipelago that protected Red Hook”—islands and shallows—“vanished long ago, demolished by harbor dredging and landfill projects that added new real estate to a burgeoning city.” So, we are supposed to believe that “our fossil-fuel-driven civilization is creating, a planet where Sandy-scale flooding will become more common and more destructive for the world’s coastal cities,” while the expert he quotes—presumably a landscape architect—blames it on harbor-dredging?

Not once does the National Geographic cover story mention that there are many scientists who disagree. Nor does it talk about the hiatus in warming, about which the international weekly journal of science, Nature, reports: “Despite the continued increase in atmospheric greenhouse gas concentrations, the annual-mean global temperature has not risen in the twenty-first century.” Folger never mentions the record-breaking 2013 mild storm season—which was predicted to be “more active than normal” and is instead a “dud.” Or the fact that after an unusually cold Arctic summer, compared to the same time last year, ice has increased by 60 percent—bucking predictions that global warming would result in the disappearance of the ice cap by 2013. Those facts might undermine his premise.

After reading the cover story, John Clema, a geologist and a life member of the National Geographic Society, responds: “I continue to be disappointed by the lack of real science and the fear mongering on the side of the alarmist greenies. The ‘Rising Seas’ article ignores the geological fact that the planet is constantly changing. We are still in an interglacial period and warming has been happening for hundreds of years—yet National Geographic has chosen to use the fossil fuel/anti-human scare tactic.”

Folks like Folger and the editors at National Geographic want you to believe that it’s anthropogenic global warming and that big-oil is spreading lies when it is really agnotologic global whining—culturally induced ignorance or doubt, particularly the publication of inaccurate or misleading scientific data.