Keystone XL: not just a pipeline, a life-line 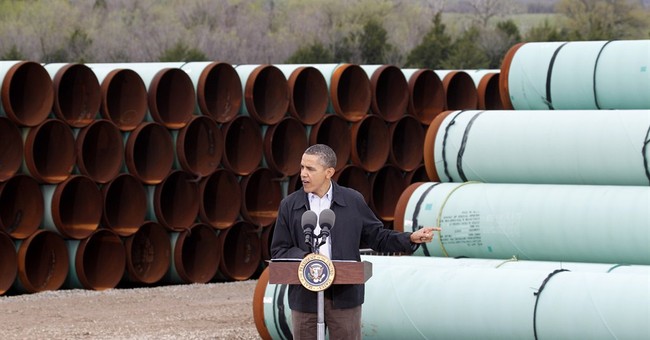 The final State Department report on the Keystone XL pipeline’s environmental impact is expected in a matter of weeks. Yet, the administration continues to send mixed messages as to which direction it is leaning. If the government announced it would make no sense to rebuild the World Trade Center in New York because when finished it would create only 50 jobs for maintenance people, you would laugh yourself silly. Yet that’s the line of argument President Obama used recently while talking about the Keystone XL pipeline project that, to appease environmental activists, he has blocked for the past five years.

“They keep on talking about this—an oil pipeline coming down from Canada that’s estimated to create about 50 permanent jobs—that’s not a jobs plan,” he said.

By Obama’s calculus, the 5,000 to 6,000 jobs a year created in the construction of the pipeline (State Department estimate) or the “approximately 42,100 average annual jobs across the United States over a one-to-two-year period” with wages totaling $2 billion the project would support (also State Department) are to be dismissed. These jobs include the manufacture of steel, the people making the pipe, and the waitresses and hotel workers.

No one knows better than the major labor unions—which support building the pipeline—that the entire construction industry is based on a continuing series of single projects, be they roads, buildings, bridges, or other structures.

Sean McGarvey, president of the AFL-CIO Construction Trades Department, which represents 13 unions, makes the point: “The interstate highway system was a temporary job; Mount Rushmore was a temporary job. If they knew anything about the construction industry they’d understand that we work ourselves out of jobs and we go from job to job to job.”

The AFL-CIO explains its support: “The American construction industry has suffered greatly. The national unemployment rate for construction workers remains above 13 percent and far too many of our members have lost homes and are struggling to put food on the table. For many members of our unions, Keystone XL is not just a pipeline; it is, in the most literal sense, a life line.”

And the bi-partisan support the pipeline attracts in Congress, clearly signals that legislators understand the economic benefits that are generated throughout the supply chain and the economy down to the local level.

The oil pipeline from Canada will carry 830,000 barrels of oil daily to US refineries on the Gulf Coast. That will help strengthen trade relations with Canada, which already is our largest foreign supplier of oil, and reduce the nation’s dependence on other foreign sources of oil, many of which are hostile to the United States—such as Venezuela, with oil “dirtier” than that from Canada.

Obama’s green supporters argue for denying approval for construction on the basis of increased carbon dioxide emissions, and Obama has taken a deep bow toward them by insisting that he will veto pipeline construction if it “significantly” contributes to high emissions, but he didn’t define “significantly.”

The XL pipeline has been subjected to four environmental studies, and as lately as March of this year the State Department has said it presents no meaningful environmental risks.

One reason is that if Canada cannot send its oil to the United States, there is talk of building a pipeline to Canada’s coast and exporting the oil by tanker to Asia, particularly China. Thus any US action to deny pipeline construction would not affect emissions. In fact, US environmental controls are much more stringent that any found in developing countries like China.

The case for the Keystone XL pipeline is straight forward. Jobs will be created. Families will benefit. Local businesses and professions will gain business. Governments will increase their tax receipts. The US economy will be fueled to a larger extent by oil from a nearby friendly country, thereby improving national security. Coupled with increased oil production in this county, we will move closer to energy self-sufficiency—while additional exports of petroleum products will help reduce the trade deficit.

The President should end the polarization of energy policy and begin uniting the country by supporting the real job creators. He should give the go-ahead for the XL pipeline immediately.