What Exactly Are Brian Kolfage and Steve Bannon Accused of Doing?

Marina Medvin
|
Posted: Aug 20, 2020 2:07 PM
Share   Tweet
The opinions expressed by columnists are their own and do not necessarily represent the views of Townhall.com. 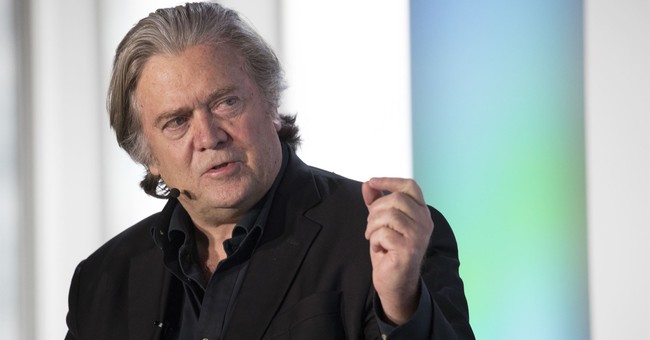 We Build the Wall is a crowdfunding campaign that has raised more than $25 million from hundreds of thousands of donors.

Each of these federal felony offenses carries a maximum penalty of 20 years in prison, which means each defendant faces 40 years of maximum incarceration.

According to the indictment out of the Southern District of New York, in order to induce donors to donate to the campaign, Brian Kolfage, “repeatedly and falsely assured the public that he would ‘not take a penny in salary or compensation’ and that ‘100% of the funds raised . . . will be used in the execution of our mission and purpose.’” Steve Bannon echoed these allegedly false assurances, publicly stating, “we’re a volunteer organization.”

“Those representations were false,” the indictment stated boldly. The four men are each alleged to have used the donated funds “in a manner inconsistent with the organization’s public representations.” In other words, fraud.

Steve Bannon is accused of funneling over $1 million from We Build the Wall through a non-profit under his control, with hundreds of thousands of dollars alleged to have been used for Bannon’s personal expenses and a portion of the money being redirected to Kolfage. Brian Kolfage is accused of converting $350,000 in funds for personal use, while repeatedly telling his donors that he won’t be taking a penny.

The men devised a scheme to conceal payments to Kolfage by routing his personal payments from We Build the Wall through a non-profit shell company under Bannon and Shea’s control, federal agents learned through their investigation and review of text messages exchanged by the men. The four men apparently pulled out all the stops, from fake invoices to sham vendor arrangements, in order to keep payments to Kolfage under the table.

The scheme appears to have originated after Kolfage needed assistance with his We Build the Wall project in December 2018. GoFundMe.com suspended the campaign and threatened to return funds back to the donors because the crowdfunding site did not have a valid non-profit listed from Kolfage which could receive the donations, nor the ability to transfer the funds to the federal government for the official wall construction. Bannon and Badolato were brought on by Kolfage to help release the funds. They came up with a modified purpose for the campaign, a private construction of the wall. The three men apparently made a variety of misrepresentations to GoFundMe in order to induce the company to release donor funds into their control.

But GoFundMe required each donor to opt-in to the newly restructured private wall mission of We Build the Wall. So Bannon, Kolfage, and Badolato went on an informational campaign to tell the public about the new mission through emails, social media posts, public appearances, etc., continuously repeating the idea that they’re volunteering and not taking a penny from the donations. These misrepresentations, the federal government alleges, were intentionally made to induce donor opt-ins to the new mission and to induce new donations.

Some donors wrote personal emails to Kolfage saying that they don’t have a lot of money and don’t trust fundraising campaigns, but they trust Kolfage to keep his word. Kolfage even sent private messages to donors to assure them that he is not being compensated.

All the while, the men allegedly had an agreement that Kolfage would be covertly paid “$100K upfront” and another $20K per month after that. To conceal these payments in public reports, Kolfage asked Badolato to list these payments as going to his wife for “media.” Shea is accused of helping the men devise other ways to conceal proceeds, including shell companies and laundering funds through fake invoices. A total of $350,000 is alleged to have been paid to Kolfage out of donor funds. Kolfage is purported to have used the money to buy a boat, jewelry, luxury SUV, cosmetic surgery, credit card debt, personal tax payments, and home renovations.

The misuse of the donated funds was never disclosed to the public and the public appears to have continued to donate money based on the false premise that their funds will be used strictly for border wall construction.

While the allegations are shocking and look damning, keep in mind that this is just a set of accusations that are intentionally crafted by creative prosecutors to obtain an indictment. Each of the four men will be reviewing the charges with his lawyer and responding with either a plea of guilty to the charges, or with their own versions of what happened, how, and why. Wait to hear their side of the story before you cement your position on this case. Just remember, Michael Flynn’s case started out just this way…