Marina Medvin
|
Posted: Apr 17, 2020 12:01 AM
Share   Tweet
The opinions expressed by columnists are their own and do not necessarily represent the views of Townhall.com. 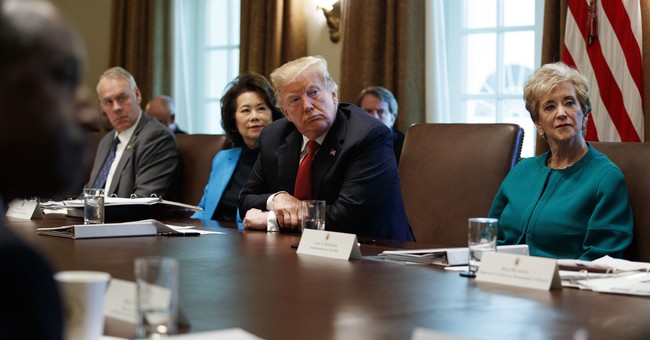 The forced coronavirus closure of small businesses throughout our great country has resulted in mass panic among business owners. For over a month now, most small businesses have been forbidden from operating.

In a desperate attempt to avoid an irreversible financial crisis, the federal government extended an olive branch — they set aside some bread for businesses in the form of forgivable business loans.

The government bread truck parked somewhere far away from business owners and their banks, and mass confusion immediately erupted. Eventually, business owners figured it out and started lining up for some gluten, in hopes of keeping their business alive — but each got into a different line. Those lining up with Lendio, got their loaf. Those lining up with Capital One, got screwed. In less than two weeks, the $349 billion appropriated for the business bread line ran out of money.

Now what? The businesses that got lucky might survive the economic endemic that is expected to be the state of our nation probably for years to come. Those who realized on Thursday morning that the bread trucks ran out before they got a piece experienced a sinking feeling in their stomachs — not a crumb left for them.

The lucky businesses who got a loaf received an average of $2,100 per applicant. That’s not much for a business to function. The business applicants who accepted the PPP loans were prohibited from asking for more bread this year from the SBA as a condition.

The SBA announced that 1.66 million applications were approved. That’s only about 29% of the small businesses registered in America. Congress is in talks of handing out more bread to the remaining 71% of businesses. But when? How much time do businesses have as they hang on by a thread before they have to let go? High-rent businesses like local gyms in big cities, for example, might have already run out of time.

Republicans were trying to get more bread to businesses ASAP, but, as usual and despite every reason not to do it, Democrats said no, not without strings attached for unrelated causes. Democrats made their priorities crystal clear: American businesses are not on the list.

The lesson of coronavirus bread lines for businesses is this: government is a feeble lifeline. Republicans try, but too many are too weak. Your survival depends on your independence, as always it has. Business owners are sitting uneasy.

Most are itching for more control of their political leaders instead of the other way around. The truth is that no business owner had predicted needing to wait in a bread line to see if they would survive. Our own governments, state and federal, meddled with the free market and forbade commerce. And now we find ourselves kneeling and begging politicians for our survival. That’s not the American way. We are a free-spirited people. Governments derive their power “from the consent of the governed” is etched in our Declaration of Independence. It is us, the people, who are to be in control of the government, not the other way around. It is exhilarating to see our people attempting to regain control of the politicians who are currently high on authoritarianism. We want but freedom to earn and to live in pursuit of happiness as we declared when this country was born.

Freedom is conjoined with American capitalism. American businessmen are not cut out for begging and breadlines. Empty pockets and percolating minds result in revolts. We are seeing seeds of them now. And spring is a good time for seeds to grow.