Marina Medvin
|
Posted: Mar 13, 2020 9:38 AM
Share   Tweet
The opinions expressed by columnists are their own and do not necessarily represent the views of Townhall.com. 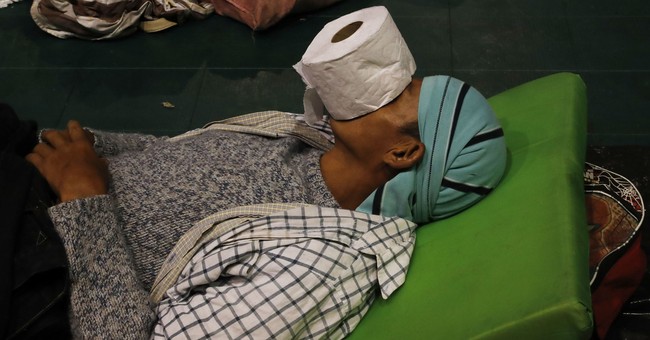 There has never before come a time when I felt the need to ponder the fate of toilet paper. But here we are: the year is 2020 and the wealthy United States is running out of toilet paper.

As it turns out, toilet paper was invented by the Chinese in the 1st Century. By the 6th Century, it was in widespread use. The toilet paper roll with easily detachable squares was patented in 1891.

But in March of 2020, American retailers ran out of toilet paper because the Chinese coronavirus fear seized the sanity of our people. We have finally come full circle with toilet paper: the Chinese giveth and the Chinese taketh away!

Are Americans behaving rationally? It depends on how you look at it. For some, toilet paper hoarding is a rational decision made after pondering the origin of toilet paper manufacturing and realizing that production will be stalled for quite some time (yes, all manufacturing roads lead to China). For others, it's just following along, "see it, do it" mentality. And then there are the ones who see competition for resources and engage so that they are not left behind.

According to a psychologist who spoke with NBC, "[toilet paper hoarding] is about taking back control in a world where you feel out of control." Another psychologist advised NBC that toilet paper panic buying is a result of Trump's administration sending mixed signals to the people (I am still waiting on this psychologist to tie in the particularity of toilet paper to Trump.) Needless to say, none of these experts explained anything helpful.

I reached out to Dr. Michael Lynch for clarification on this issue, a Board Certified Clinical Psychologist with over 30 years of experience and a 24-year career as an active-duty Army officer. Dr. Lynch explained that the human psyche is funny in that when we sense a crisis, we feel the associated need to stock up on toilet paper. This is not the first time that we rushed to stockpile the TP. Dr. Lynch advised that whenever there is a snowstorm, people similarly hoard toilet paper. Apparently, what seemed to be idiosyncratic behavior was, in fact, entirely predictable. So it's not Trump; it's us.

The reason why stores and online retailers are running out of toilet paper is that the sense of crisis isn't limited to a small geographic region that is experiencing a storm; it affects the entire nation. Retailers and suppliers did not predict the panic that has struck the world and did not adequately increase supply and production.

Eventually, supply chains will catch up, and demand will slow down. But for now, Americans just can't spare a square; we don't have a square to spare!