Marina Medvin
|
Posted: Jul 22, 2019 9:20 AM
Share   Tweet
The opinions expressed by columnists are their own and do not necessarily represent the views of Townhall.com. 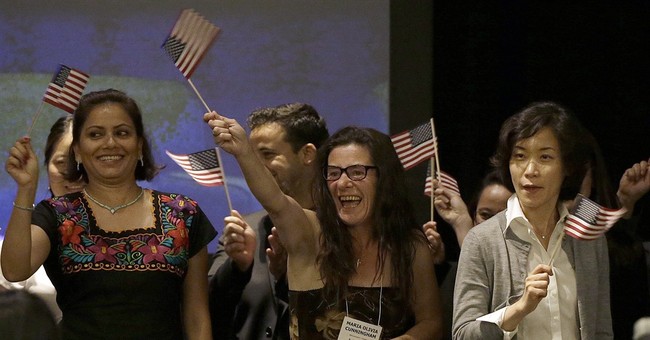 Last week, I published a column for TownHall.com entitled I, Immigrant, Agree With Donald Trump — If You Are Not Happy Here, You Can Leave!

To be honest, I did not expect much support for my position after seeing the highly critical initial reactions to Trump’s words from conservative commentators. I strongly disagreed with the commentators who disparaged Trump for voicing what I felt was obvious. Unlike these commentators, I felt elated when Trump spoke the truth, confronted the Islamo-Utopians, and told Ilhan Omar to put her money where her mouth is. I published the column because I felt the American people needed to know that at least some immigrants supported President Trump.

To my surprise, I received an overwhelming outpouring of support — from immigrants. Many immigrants, from countries all over the world, have reached out to me, thanking me for representing their ideas, for writing the words that they were thinking. These wonderful, grateful, newly-minted Americans support our president and his America-first policies. They want the American people to understand that legal immigrants wholeheartedly agree with President Trump: if you are not happy here, you can leave.

I would like to introduce you to some of the people who reached out to me.

Milena is an immigrant from Czechoslovakia. She was outraged at the rising anti-American ideology amongst some ungrateful immigrants. “I am proud to be a US citizen,” she wrote, “I love my home, and I will fight anyone who tries to harm it,” she declared.

Harold emigrated from Armenia, a country that lost 1.2 million Christians in the Armenian Genocide at the hands of the Muslim Ottoman Turks. He advised, “we need immigrants who respect our freedoms and values for life.”

Maureen is a very patriotic Polish immigrant who described our president as “a man that loves America as much [as] I do, has an undying passion for America as I do.” She was grateful to be living the American Dream. “I have been blessed with so many amazing opportunities from our country ... I feel honored and it is a privilege to have been able to come here.”

Dan Backer emigrated from Russia. He has dedicated his career in the United States to helping preserve American values. “I’m deeply grateful to live in a country that puts freedom and liberty first, not the will of the state,” he told me.

Janet is an English immigrant. She stated, “I grew up being very pro-American ... I love this country and I feel the same way you and the President do. Love it or leave it.”

These are quotes from just a few of the people who took the time to write to me. Italian immigrants wrote about their patriotism and dedication to military service, Russian immigrants wrote about being grateful for American capitalism, and the list goes on and on. These gracious immigrants and patriotic Americans all stood up and echoed, “I, immigrant, agree with Donald Trump. If you’re not happy here, you can leave!”

Why do these immigrants love America so much if it’s not perfect?

The truth is that no country has a clean record, and American history is not pristine. From hanging women for “witchcraft,” to dehumanizing Africans and keeping slaves, to segregating Jews and blacks from whites, American history went through some sordid, cruel periods. But Americans stopped it, they stopped all of it. That is what makes America great; the goodness of the American people. Each of us has witnessed the greatness of America and her astounding people. Africans became American patriots. Jews forgave. Women now thrive. A black man was president of the United States of America for two terms. Only in America can the children of the wronged have opportunities for leadership of the country that once oppressed their predecessors. That is why there are tens of thousands of people risking their lives every single day to breach our borders because America is the land of opportunities, the greatest nation in the world. We possess what the world covets.

That is what the likes of Ilhan Omar, Rashida Tlaib, and AOC fail to realize: our country is great and they are lucky to live here. For whatever faults they believe they see in us, they have the freedom to pursue a cure. But they cannot trample on the American people while on their quest, and they cannot devalue the goodness that surrounds them. It is the goodness that emanates from capitalism, from our Judeo-Christian values, and our high valuation of freedom.

We, immigrants, are thankful to be Americans, to contribute to a capitalist economy, and to live amongst the greatest people in the world.