Marina Medvin
|
Posted: May 07, 2019 2:50 PM
Share   Tweet
The opinions expressed by columnists are their own and do not necessarily represent the views of Townhall.com. 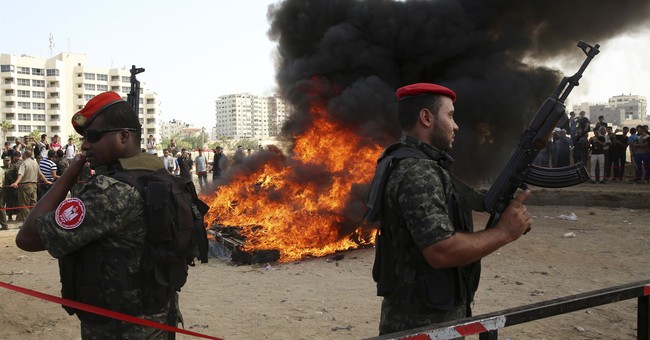 The Associated Press and gullible leftist media outlets everywhere jump on the opportunity to report anything promulgated by Hamas's propaganda arm, the deceptively named Gaza Health Ministry. The Gaza Health Ministry is nothing more than a mouthpiece for the Islamist terrorist organization. It bears a name intended to help liberal reporters feel comfortable referencing the Ministry as a source of authority on information against leftist media's ideological enemy: Israel. For Hamas, releasing information through the Gaza Health Ministry has consistently proven to be a highly useful tool for promulgating propaganda against Israel. It has also greatly expanded the depth of the echo chamber for terror-sided reporting.

The Israeli military vehemently denied involvement with the deaths of the pregnant woman and the baby, explaining that their sources reveal that the woman and baby died as a result of being inside of a Palestinian home that exploded from a misfired Islamic Jihad terrorist rocket that was being launched from that home at the time of the explosion.

Recognizing that the Israeli report is in direct contradiction to the account put forward by the Gaza Health Ministry, AP News decided the disagreement should be noted at the end of their story on these deaths. "There was no way to reconcile the conflicting accounts," AP News concluded, showing that a terrorist organization and a Western democracy are of moral equivalency for AP News.

Just last year, a very similar propaganda story was promulgated by Hamas’s Gaza Health Ministry. According to the Gaza Health Ministry, an 8-month-old baby, Leila al-Ghandour, died from Israeli tear gas inhalation. She was innocently participating in border protests, the ministry claimed, when the Israelis killed her with poisonous gas. The media loved the story and spread it like wildfire. But it was a lie; the baby died at home from a blood disease and her body was then carried to the border riots, the 2018 “border protests,” as CNN called them, which were an unprecedented Islamist attempt to invade Israel to kill Jews. The Palestinian responsible for the dead baby story eventually admitted that Hamas leader Yahya Sinwar had paid the family to fabricate the story that the baby had died from Israeli tear gas rather than from a pre-existing medical condition. Once outed, the Gaza Health Ministry responded by saying the baby’s name was removed from their list pending an “investigation.” Most media outlets failed to report that the dead Palestinian baby story was fabricated.

Mainstream media consistently fail to report that the Gaza Health Ministry is run by Hamas, that it is nothing more than a ministry of propaganda run by Islamist extremists whose sole concern is to eradicate Jews, and that it has a consistent track record of lying. “Hamas lies systematically, instructing civilians to misinform the foreign press. It lies habitually, with a formidable record of mendacity from previous conflicts. And it lies guiltlessly, convinced that the objectives of ‘resistance’ supersede quaint notions of truth-telling,” Oren Kessler wrote for U.S. News & World Report back in 2014. The reason for Hamas lying is simple: it bolsters the Palestinian victim image while simultaneously vilifying Israel, their mortal enemy. As for the mainstream media, the sympathetic stories they put forward must fit the mainstream media's agenda; and the agenda since 1967 has been consistent Islamist apologism. The lies of Hamas and the Gaza Health Ministry are thus deemed acceptable by leftist reporters. The ends justify the means for the left; they feel no shame in shielding the terrorists or in joining Islamists in “intersectionality.” Moreover, the propaganda stories help leftist mainstream media in its misinformation battle against the conservative values of the Israelis.

The result of blind Islamist propaganda regurgitation is unmistakable: mainstream media becomes an echo chamber for Hamas. But mainstream media does not mind. Their lack of concern for truth at the expense of publicly losing an ideological battle against Western values is a concession that leftist reporters readily make.