Marina Medvin
|
Posted: Apr 25, 2019 12:01 AM
Share   Tweet
The opinions expressed by columnists are their own and do not necessarily represent the views of Townhall.com. 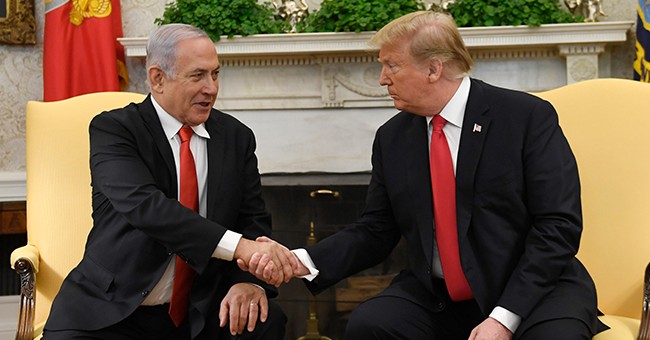 Each friendship is special. Some are powerful. And then there is a bromance made in conservative heaven: Donald Trump and Benjamin Netanyahu.

This week, Netanyahu announced that a new community being built in the Golan Heights will be named after Trump in gratitude to the U.S. President for his historic recognition of Israel’s sovereignty over the territory, which Israel has considered its own for the past 52 years.

“I’m here on the beautiful Golan Heights. All Israelis were deeply moved when President Trump made his historic decision to recognize Israel’s sovereignty over the Golan Heights. Therefore, after the Passover holiday, I intend to bring to the government a resolution calling for a new community on the Golan Heights named after President Donald J. Trump,” Netanyahu announced in a video posted to social media.

Back in March, Trump tweeted: “After 52 years it is time for the United States to fully recognize Israel's Sovereignty over the Golan Heights, which is of critical strategic and security importance to the State of Israel and Regional Stability!" He then swiftly moved to make the decision official.

The Golan Heights story is but one of many that has elucidated the mutual respect and friendship between the two prominent conservatives.

At Netanyahu’s celebration of re-election earlier this month, Trump and MAGA flags were proudly waived by Netanyahu’s supporters at the victory party. Feeling honored by support from his friend’s constituents, Trump tweeted, “Trump flags being waived at the Bibi @netanyahu VICTORY celebration last night!” Netanyahu campaigned for re-election on the strength of his friendship with Donald Trump and what the two have achieved together in their mutual fight against terrorism. Trump praised Netanyahu before the election as "tough, smart, and strong.”

Just days before the election, Bibi publicly said to his friend Don: “Israel has never had better friend than you.” He wasn’t kidding. Upon Trump’s election, Israel went from shafted to respected, while Israel’s opponents went from nurtured to tolerated.

When Trump officially recognized Jerusalem as Israel’s capital and ordered that our embassy be moved to the capital to match our embassy locations in other foreign nations, Netanyahu responded by calling Trump’s decision "courageous and just.”

“Today we finally acknowledge the obvious: that Jerusalem is Israel’s capital. This is nothing more or less than a recognition of reality. It is also the right thing to do,” President Trump announced back in December 2017, demonstrating his unfettered support of Israel.

The mutual interest in Israeli control of their own land is but one of many connections between the two powerhouse leaders. The two men also share the same criticisms by U.S. leftists, who insist that the leaders’ decisions to protect the security of their people are “racist” policies. Just this week, Sen. Bernie Sanders called Netanyahu a “racist,” as did Beto O'Rourke earlier this month. Sanders used the same word to describe Trump, which he echoed from fellow leftist presidential hopefuls Sen. Elizabeth Warren, Sen. Amy Klobuchar, Sen. Kamala Harris, and Sen. Kirsten Gillibrand.

The “right-wing” politicians also shared unscrupulous investigations while in office by their opposing parties. Trump suffered through the Mueller investigation for a made-up collusion story, while Netanyahu was charged by his opponents for smoking cigars and drinking wine that was gifted to him while he was in office.

The two have continually denied any wrongdoing and have developed a sense of humor about the ceaseless attacks on their character. While handing a bottle of wine to the U.S. President in celebration of the Golan Heights recognition, Netanyahu smirked as he quipped, “I hope they don’t open an investigation about this,” embracing his friend Donald.