Hamas Violence is “The Great Return March” to Overtake Israel

Marina Medvin
|
Posted: May 15, 2018 9:30 AM
Share   Tweet
The opinions expressed by columnists are their own and do not necessarily represent the views of Townhall.com. 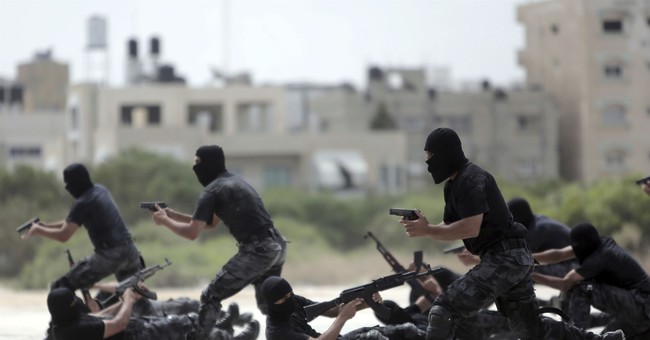 American big-media has been spreading the fake news story that the Hamas violence at the Israeli border is about the American Embassy.

Turns out, this is false. Straight from the source, we learn that this is not what the riots are about. What the Palestinians want is to overtake Israel.

Hamas has a Facebook page called The Great Return March. They even have a web page. They clearly explain their goal - overtake Israel. IDF explains that the assault on the border is happening because Palestinians want to break through the Israeli border and cause deaths and destruction inside of Israel. In this video, IDF shows maps posted by Hamas on their Great Return March social media, illustrating where Israeli towns and homes are located and showing paths of how to get there from the border.

Palestinians are governed by Hamas, a terrorist organization, according to the U.S. Government. Hamas mission is to take Israel away from “the Jews.” True to form, they are out there screaming, “KILL THE JEWS!”

Palestinians, backed by Hamas and Iran, are seen all over the news slingshotting stones and firebombs into the country of Israel. Israel reports foiling bomb threats. Palestinian aggression at the border has led to dozens of deaths. The US is holding Hamas responsible for the deaths of their people. Israel is warning Hamas leaders that if they keep encouraging these riots, Israel will kill Hamas leaders. Hamas maintains that their border violence is peaceful. The Great Return March Facebook page calls their dead "martyrs."

This “march,” as the Palestinians are calling it, or “protest,” as US media is calling it, or “violent attempt to breach the border and kill Israelis,” as Israel is calling it, is happening right now because of the 70 year anniversary of Israel. This is a six-week project, pre-planned to last from March 30 through May 15.

Coincidentally, the US embassy opened on May 14, on the day of the 70th anniversary, leading the US big-media to assume that the violence was about the US embassy move and Trump. Big-media is Trump-drunk, so they have a hard time seeing anything independent of Trump. We all know how difficult it is to see clearly while drunk, so big-media’s reporting failure might just be due to excusable intoxication.