Marina Medvin
|
Posted: Jan 08, 2019 12:01 AM
Share   Tweet
The opinions expressed by columnists are their own and do not necessarily represent the views of Townhall.com. 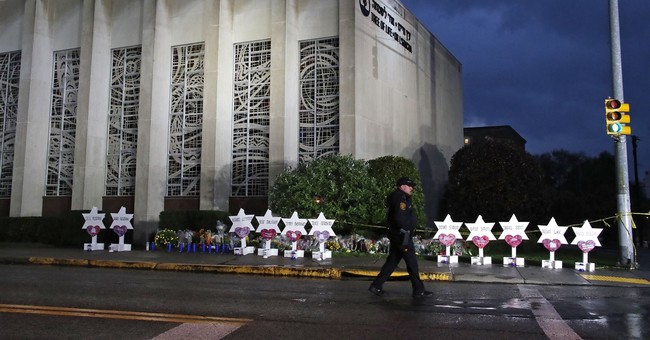 Congressional Democrats want to persevere the right of Palestinian supporters to boycott Jewish-made goods from Israel, but they oppose our right to boycott companies who boycott those goods. Convoluted, right?

This logically incongruent concept is ideologically entangled with the recent surge in Democratic antisemitism, which is fueled by the Democratic Party’s allegiance (or “intersectionality”) with Islam and the Palestinians. To unravel this mess, we need to start at the beginning.

What is this boycott movement and who is behind it? The boycott, divestment and sanctions movement (BDS) is anti-Israeli propaganda movement started by Palestinians and their supporters, which seeks to wage economic warfare on Israel with the intent of financially crippling the people and their government to create an opportunity for Palestinians to overtake the Jewish nation. “The BDS campaign does not support Israeli-Palestinian peace efforts, and rejects a two-state solution to the conflict,” explains the ADL. BDS is an economic version of Palestinian terrorism with the same goals as related campaigns: arson terrorism, environmental terrorism, and terror tunnels. The BDS movement is simply part of the Palestinian movement that wants to destroy Jewish Israel and replace it with an Islamic Palestine.

Why do Democrats support the Palestinians and Islamic totalitarianism, while opposing the all-inclusive Jewish country of Israel? The Democratic Party is saturated by socialists and extreme leftists. Socialists and leftists see the world in a black and white version of rich and poor. They see Israel as rich, and hence bad, and the Palestinians as poor, and therefore victims. The Palestinians have taken advantage of the socialist support and dishonestly blamed their poverty on the Israelis. Palestinians also pulled the racism card to entice younger Democrats and claimed that the Israelis are discriminating against them based on race.

Palestinians have said that Israelis “took” their land (false — all land was legally purchased from landowners, and Israel maintains all land purchase records), that Israelis keep the Palestinians poor (false — they keep themselves poor by wasting BILLIONS of dollars of U.S. and international welfare on terrorism activities and radicalizing their children, instead of investing in commerce for their own people), and that Israelis discriminate against them (false — Israel is the only country in the Middle East where Muslims, Christians, and Jews are free people and have access to education, can work as judges, etc.). Democrats feasted on the propaganda without question — because Israel gets rich while the Palestinians remain poor. To the Democrats, Israel is like America, while the Palestinians are very unAmerican. This is where the Democrat theory of “intersectionality” kicks in and creates an avenue for the Democrats to believe that the Palestinians are a victim group to take under their wing.

According to a tweet by Senator Marco Rubio, who has been fighting BDS in Congress, a “huge argument broke out at Senate Dem meeting last week over BDS. A significant # of Senate Democrats now support #BDS & Dem leaders want to avoid a floor vote that reveals that.” Elected U.S. officials now support a movement based on wildly outrageous lies and anti-semitic propaganda.

Why is antisemitism on the rise in the Democratic Party? Anti-semitism is on an exponential slope in the Democratic Party. This is due solely to the fact that Democrats have categorized Jews as white, imperialist oppressors of dark-skinned, impoverished Palestinians. To maintain this position, Democrats have engaged in a campaign to rewrite history. Jews, who walked with Martin Luther King, Jr., were deeply involved in the equality movement in the U.S., who were prohibited from using white establishments (think back to the 1950s signs “No N*****, No Jews, No dogs”) and who were slaughtered by the millions just 70 years ago, are now being rewritten by the Democrats as white supremacists. Israeli Jews, who wanted nothing but to live in peace and be left alone, who gave up land for peace, are being rewritten by Democrats as war-hungry. The Palestinians, on the other hand, have rejected every peace offer and have engaged in continuous terrorism, and are now being recast by the Democrats as peace-loving victims.

Moreover, Democrats have been embracing Palestinian-allegiance politicians as their own. Rashida Tlaib, America’s first Palestinian Muslim Congresswoman, who cloaked herself in a Palestinian flag to celebrate her U.S. election night victory over no-one (she ran unopposed), stated that she supports a one-state solution to the Israeli-Palestinian conflict that would eradicate Israel and replace it with an Islamic totalitarian state for the Palestinians. She cemented herself as a champion for Palestinians as the first course of business in Congress with a post-it note on her office map with the word “Palestine,” and an arrow pointed towards Israel. Tlaib also supports the Great Return March, a Hamas-run terror movement to kill Jewsand overtake Israel. Unsurprisingly, she also supports BDS.

As of now, Democrats oppose discrimination against everyone other than Jews. The ACLU, for example, an opponent of discrimination against the disabled, women, blacks, immigrants, Muslims, LGBT, etc., has hypocritically supported the discrimination of Jews. In a fascinating act of double-dealing, the ACLU proposed that while businesses cannot discriminate against LGBT community, those same businesses can discriminate against the Jewish-Israeli community, attacking the former as discrimination while defending the later as political speech. “Refusing to do business with people or companies just because of their nationality is not political speech,” responded professor of law Eugene Kontorovich. “It is discrimination in business. Replace ‘Jews’ with ‘gays,’ and you’ll see how fake the constitutional objections to the BDS bill are,” Kontorovich asserted. An expert on constitutional and international law, Kontorovich has recently exposed the discriminatory policies of leftist company Airbnb, “which will operate anywhere and serve anyone—except Jews in the West Bank.”

The same Democrats who audaciously throw the word Nazi at conservatives who support Donald Trump, a President who unabashedly supports the Jewish country’s right to exist, feel entitled to discriminate against Jews to appease the Palestinian who terrorize Israelis with arson kites laden with swastikas and who are intent on raising a nation of radical Islamists.

When it comes to Jews and Israel, Democrats’ hearts don’t bleed; they seep venom.