A Congresswoman Who Puts Palestinians First And Americans Second

Marina Medvin
|
Posted: Jan 02, 2019 12:01 AM
Share   Tweet
The opinions expressed by columnists are their own and do not necessarily represent the views of Townhall.com. 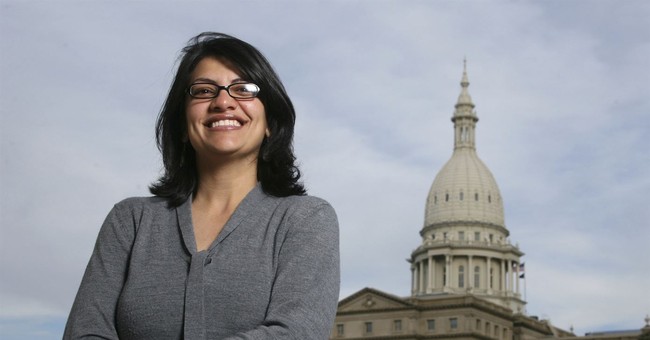 Rashida Tlaib is a Democrat who was elected to the 2019-2020 term for Michigan's 13th Congressional District, which is a part of Detroit and suburbs near the city. This area is home to one of the largest Arab populations in the U.S. Tlaib is part of a wave of about 100 Muslims who filed to run for Congress in 2018. Tlaib is the first Palestinian-Muslim to be elected to U.S. Congress.

Tlaib is proud to be a Palestinian; more proud of her Palestinian heritage than of American culture. Upon learning of her congressional victory, for which she was prepared as she ran unopposed in the general election, Tlaib covered her body in a Palestinian flag. Not an American flag. A Palestinian flag. In what is likely a historic first, a future member of U.S. Congress covered herself in the flag of a foreign people, not the American people who she will be sworn to represent.

At Tlaib’s election night rally, in response to her acceptance speech about her West Bank Palestinian roots, Tlaib’s supporters cheered with Arabic high-pitched tongue trills, to which Tlaib responded that she was “a proud Palestinian, American and woman.” She went on to call Michigan a “Palestinian community” and explained that her strength comes “from being Palestinian.”

Just last week, Tlaib doubled-down on her allegiance to the Palestinians. She announced on Instagram that she would be wearing a Palestinian thobe, which is an embroidered dress that is of Bedouin origins but adopted and represented by Palestinians as their own. (Palestinians are not of uniform genetic ancestry but are instead a mix of various Arab groups who lived in that geographic region under the Ottoman Empire, and so multiple traditions are borrowed from nearby Middle Eastern cultures.)

Back in October, Tlaib proudly displayed a tote bag from the US Campaign for Palestinian Rights, formerly operating as the US Campaign to End the Israeli Occupation. The bag displays the words “From Palestine to Mexico, all the walls have to go,” and Tlaib captions the photos with the words “you can never take the activist out of me.” Tlaib has displayed this bag in at least two other Instagram posts.

So what is this organization for which Tlaib is an activist? The US Campaign for Palestinian Rights is known for supporting the boycott of Israeli goods, a political campaign known as BDS, something that is vehemently opposed by bipartisan American congressmen, and by various Governors, as unjust, bigoted crap promoted by Palestinians and their supporters. They are also known for supporting The Great Return March, a Hamas-organized attack on Israel to “tear down the border,” “tear their hearts from their bodies,” and  “KILL THE JEWS.”   Tlaib’s friends at the US Campaign for Palestinian Rights support the terrorists that Hamas claimed as martyrs and called for punishment of Israel for protecting its borders against the militant Islamists wishing to take over Israeli land.

Oh, and to top it off, the US Campaign for Palestinian Rights also opposes American businesses that celebrate Christmas.

So what are Tlaib’s political issues? Well, the Palestinians, first and foremost. This happens to be an important issue in Congress these days, as American taxpayers have paid over 6 billion dollars to the Palestinians in welfare, monies which have gone towards terrorism and murder, but politicians are telling us we can’t spare 5 billion for a wall for the American people.

And, Tlaib is against the enforcement of American immigration laws. She protested the ICE detention of an illegal Palestinian immigrant two days after winning the election, calling the enforcement of U.S. law “injustice” and repeating the Muslim phrase “Insh-Allah, Insh-Allah.”

Just to be clear, the U.S. House of Representatives oath states: “I, _______, do solemnly swear (or affirm) that I will support and defend the Constitution of the United States against all enemies, foreign and domestic; that I will bear true faith and allegiance to the same; that I take this obligation freely, without any mental reservation or purpose of evasion ...”

Somehow, I doubt Tlaib will support and defend the Constitution of the United States against all enemies, foreign and domestic; that she will bear true faith and allegiance to our Constitution; that she will take this obligation without any purpose of evasion. That Palestinian flag on election night, coupled with a Palestinian-pride speech, was an inarguable giveaway. Calling the enforcement of U.S. laws on Palestinian lawbreakers "injustice" is just the cherry on top.

To be clear, Tlaib is not the first person who celebrates a foreign culture to join Congress. However, she is the first to prioritize the foreign culture over America. Scottish-rooted congressmen, for example, do not wear kilts to their congressional swearing-in ceremonies. None of the congressional leaders have waived a foreign flag upon election victory; some waived a secondary flag jointly with the American flag, but I cannot find a single other instance of a congressperson waiving a foreign flag on its own. The pervasive prioritization of Palestinian culture above all other issues is thus exceptionally alarming.