Marc Little
|
Posted: Oct 23, 2019 12:01 AM
Share   Tweet
The opinions expressed by columnists are their own and do not necessarily represent the views of Townhall.com. 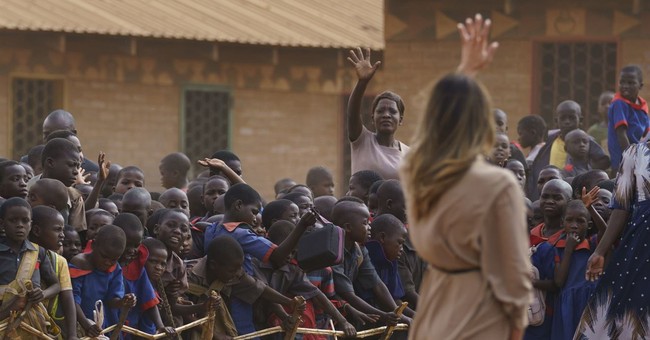 From the start of the 21st Century, till today, the world we live in has drastically changed and some parts of it have become landing pads for those who wish harm to U.S. interests. These circumstances are precarious but they also have the potential to impact Africa-U.S. relations. With the rising economies of Ghana (and others) along with the Intra-Africa Free Trade Agreement on the horizon, the possibilities within Africa are enormous, but Africa’s foreign trade partners will also play a vital role in determining the future.  In these complex times, choosing the right partners is as important as the plan for growth itself.

In the face of the Cold War, Governor Ronald Reagan gave a speech historically called, “A Time for Choosing”.  The speech was about choosing freedom at all costs.  A poignant excerpt from that speech states:

“We're at war with the most dangerous enemy that has ever faced mankind in his long climb from the swamp to the stars, and it's been said if we lose that war, and in so doing lose this way of freedom of ours, history will record with the greatest astonishment that those who had the most to lose did the least to prevent its happening...”

The increasing activity of China and Russia on the continent represents a clear and present complication for Africa and U.S. relations.  Africa and the U.S. must not divert attention or lose focus on each other as a historic opportunity for partnership takes shape.

Between 1995 and 2006, US aid to Africa was roughly equal to the amount of assistance provided by all other donor nations combined, said former National Security Advisor John Bolton.   For Fiscal Year 2017 alone, the U.S. Department of State and USAID provided approximately $8.7 billion dollars in development, security, and food assistance to Africa, he reported. In the prior fiscal year, the aid in these areas was $8.6 billion dollars. There is room for growth in these areas based upon an alignment of national strategic interests.

Meanwhile, China has made moves into many parts of the African continent. As an example, its predatory lending will result in China taking over Zambia’s national power and utility company as repayment of debt. In another case, Djibouti’s debt to China results in a Chinese military base near Camp Lemonnier, a key to U.S. counter terrorism efforts in east Africa.  Moreover, a strategically located Djibouti port is believed to be the next concession to China. These developments stand between Africa and U.S. relations.

Likewise, Russia “continues to sell arms and energy in exchange for votes in the United Nations,” Bolton said.  And equally troubling, radical terrorist organizations all operate, recruit, and plot attacks against American citizens and targets on the continent.

Consequently, on December 13, 2018, Bolton delivered the Trump Administration’s New Africa Strategy that paves the way for success for Africa-U.S. relations. The New Africa Strategy stresses three core U.S. interests on the African continent: (1) advancing U.S. trade and commercial ties with nations across the region to the benefit of both the United States and Africa; (2) countering the threat from Radical Islamic Terrorism and violent conflict; and (3) ensuring that U.S. taxpayer dollars for aid are used efficiently and effectively.

The relationship between Africa and the U.S. can be better than ever; the U.S. has held firm on its commitment to Africa and the emphasis around economic development, trade, and security remains great as evidenced by both the president and then-Secretary Tillerson conducting high-level dialogue, visits to the continent and sustained USAID.

Moreover, the U.S. commitment is codified in the Africa Grown Opportunity Act (AGOA) passed in May 2000 (and extended) to assist the economies of sub-Saharan Africa and to improve economic relations between the United States and the region.

Since 2000, under AGOA, demonstratable gains have been made.  Approximately 300,000 jobs were created, a four-fold growth in non-oil exports realized, and export-oriented industries built. Further, “trade between the U.S. and Africa was 13.5 percent higher than in 2017,” said Ambassador Matt Harrington.

However, future gains are at risk where China, Russia and Radical Islamic terrorism undermine U.S. interests.

There is a new starting point for productive relations between Africa and the U.S. On that journey toward growth and economic development, eradicating corruption, alleviating human rights abuses, cooperating in combating Radical Islamic terror groups and ensuring accountability for U.S. investments are important to this key relationship.

The New U.S. Africa Strategy strongly assures that Africa will have a U.S. partner that will respect its uniqueness and independence and it will receive the support for humanitarian, security, and development assistance it requires. Africa can win with the Trump administration and the new strategy for Africa-U.S. relations.