The Center Does Not Hold 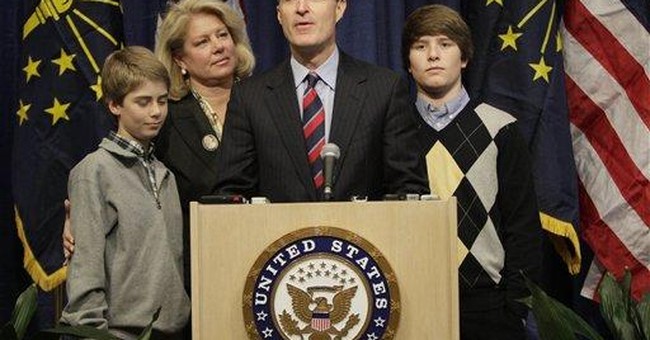 What does it mean? Even in the midst of economic and political meltdown, Indiana Sen. Evan Bayh was still between 10 and 20 points ahead of his potential Republican challengers. Why did Bayh announce he will not run for re-election?

"Even pols are sick of Washington," blared the Politico.com headline. His friend and former chief of staff, former Indianapolis Mayor Bart Peterson, told the press, "Those frustrations have increasingly worn on him, and I think his willingness to tolerate the frustrations has decreased over time."

Culture war is not a term we hear that often anymore because, well, the crucial center of American politics is sick and tired of the very idea of culture war.

But author and professor James Davison Hunter's concept still best explains where we are today in American politics, where the vast center of America is stuck in a tug-of-war between two deeply competing visions of reality.

Cultural power, explains Hunter, is the power to "name reality." Culture is mostly created in urban centers and spread to the periphery, e.g., Harvard Law School decides that gay marriage is a basic human right, which spreads through judges until it runs smack up into the one source of cultural power in America that is not controlled by urbane centers -- the American people.

We are by far the most democratic system on earth. A certain form of Euro-liberalism may capture the universities, reinforced by its dominant control over government money, influencing the media and Hollywood. In Europe, the political leaders of the parties respond to this complex of cultural power mostly by submission to it -- it's easier. And then voters are deprived of choice. Where elite political leaders cooperate to end the culture war by giving in, voters do not get to choose between competing visions.

But in America, unlike Europe or Canada, leaders can spring up from nowhere, develop their own financial base, form a counter-academy through think tanks and a counter-media with talk radio and Fox News, and finally swarm into primaries to unseat party bosses who try to be an echo, not a choice. The ironic net result of this freedom and democracy is the continuation of a culture war that the majority of Americans don't especially like.

On the so-called social issues, from which the term "culture war" first arose, the cleavage that constitutes the culture war is obvious and ongoing: abortion, marriage, abstinence, religious liberty, parental rights. Americans have only to look over to Canada to see the post-culture-war future, the cost of giving up and giving in. In Ontario, the Hamilton Mountain News just posted a newly leaked memo that shows how public schools are being instructed to respond to parents who object to grade school children learning about government-approved sex. Teachers are supposed to smack down parental rights and tell them it is just the teacher's job "to teach accurate, up-to-date information to every child, including yours." Whether you like it or not, see?

But the culture war dynamic has spread from social issues to economics, health care and taxes. These are becoming questions not just of practical policies and politics, but of cultural identity. Sarah Palin is hated and loved for who she is, not for what she promises to do. So, for that matter, was Barack Obama, right up to the moment when he began to actually govern.

Obama has transformed himself into a symbol of politicians who are so principled that they do not care what the American people think.

Do we want to be like Europe? Cosmopolitan, dominated by academic elites, creating the comfort of consensus by shutting down opposition, internationalized, pacifist and dependent, rich but socialist? Or is there something in this thing called America too precious to be lost to government control and the promise of cradle-to-grave safety that comes at the price of liberty and responsibility?

America is a land divided against itself, stuck between two visions of our future, our identity, our very soul.

Ask Evan Bayh: The center will not hold.