The Hero or the Goat: Why Men Die to Climb Mountains 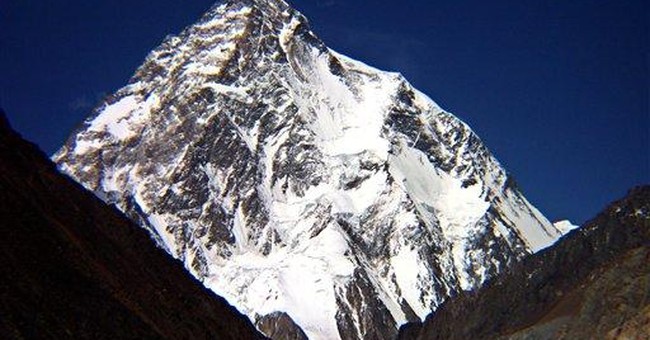 When you are a woman, a lot of the things men do are, well, hard to understand.

Some of the latter include this weekend's rainbow coalition of 11 presumed dead: three South Koreans, two Nepalis, two Pakistanis and climbers from France, Serbia, Ireland and Norway.

An Italian, Marco Confortola, was left stranded on the mountain when helicopters could not quite reach him at 20,340 feet. Marco somehow climbed down more than 6,000 feet on black, frostbitten feet. In a satellite phone conversation with a friend, Marco said, "I never gave up in my life, I am surely not going to give up now."

I hope by the time you read this, Marco has somehow, improbably, been rescued.

Gerard McDonnell is dead. Before he died, Gerard became the first Irishman ever to reach the peak of K2. I hope it comforts his family and friends.

Why do men do these things?

I thought of Gerard and Marco while reading through a new study released by the National Bureau of Economic Research (NBER), "Gender Differences: The Role of Institutions." The authors are two women, Muriel Niederle and Alexandra Yestrumskas, who come to this conclusion: "Large gender differences in the propensity to choose challenging tasks appear to be driven by gender differences in risk aversion and in confidence about the ability to perform a new and potentially difficult task."

In the real world, discrimination or social discouragement may explain why women do not enter high-risk, high-return ventures to the same extent as men, the authors say.

In a description of this study, NBER Digest's Les Picker continues:

"However, the authors examine an environment in which women and men perform equally well, and in which issues of discrimination, or time spent on the job do not have any explanatory power." Yet under these laboratory conditions, there remain "large gender differences in the propensity to choose challenging tasks, with men choosing the hard task on average 50 percent more often than women, for any given performance level."

It reminds me of a study in 2005 by Boston University psychologists investigating why men are disproportionately victims of drowning. The answer? Men consistently overestimate their ability to swim.

There is, in other words, and upside and a downside to men's greater taste for risk. I don't know how many of the men falling or freezing to death up on K2 had children, but I know that no children are going to lose their mother up there on the mountain this time.

Women -- feminism aside -- have always looked at this male propensity for risk with a double-edged vision. On the one hand, we cannot help human nature: The successful man, who braves risks and emerges triumphant carries a fascination for both women and other men that, well, the evolutionary biologists can have a field day with. At the same time, we look askance at the way our own desires pull us into a relationship with this strange, opposite sex, with his odd priorities and who does these bizarre things for reasons that no woman, I think, can ever fully understand.

The saddest part of it all is how senseless these 11 deaths are. The Marines rushing into urban conflict in Anbar province I can wholeheartedly admire. The firemen who ran into the burning towers of 9/11 and lost their lives, I remember in my prayers with gratitude and admiration.

But somehow we live in a world where not enough men find real avenues for masculine achievement. They are moved to take enormous risks, like climbing K2, for no particular reason in a world that (apparently) offers them insufficient real outlets for their heroism.

To the 11 dead on K2: Salute! We used to send such men out to explore new continents, conquer frontiers or defeat the barbarians.

Now 11 good men have lost their lives climbing a mountain for no particular reason. Because it was there, they no longer are.

What a magnificent waste!