Children of Sperm Donors Have Rights, Too 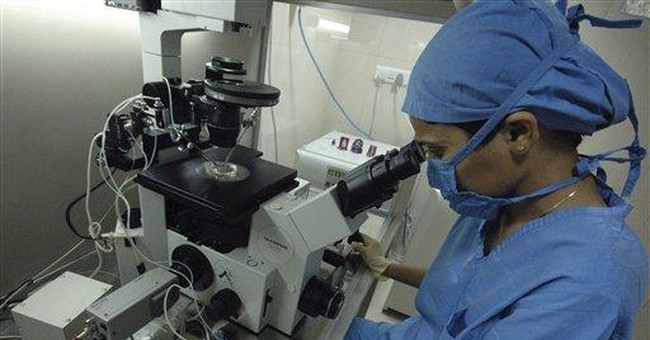 In New Jersey, the state Senate has twice voted to give adopted children access to their original birth certificates, that is, to the names of their biological mothers. Birth mothers would have one year to notify the state that they wish to remain anonymous. Even so, such birth mothers would be compelled by government to provide social, cultural and health information, or else their identities would be released regardless of their consent.

Recently, one southern New Jersey newspaper weighed in forcefully in the bill's favor: "This is not too much to ask from a birth mother ... The adoptee's right to this information is as important as protecting the privacy of the birth mother," the editors of the Courier-Post opine.

But why pick exclusively on birth mothers? If children have a right to know their own biological parents -- a claim recognized in international human rights law and one to which I am deeply sympathetic -- there is no good reason to limit this claim to the small number of women who accept the agonizing burden of giving life to children they cannot raise.

Far more children these days are deprived of knowledge of their origins by a totally difference process: artificial insemination. How can we possibly countenance placing burdens exclusively on women who give life and excuse totally the men whose sole contribution to their child was to "donate" into a little cup, usually for money?

And our laws are almost totally to blame for keeping children created by reproductive technologies in the dark about their origins. The common law remains the rule for children created by sexual acts: I cannot bargain away at the bar my child's right to the support and care of both his mother and father. The child retains the right to the support of both parents, no matter to what those parents have agreed. But if I go to a doctor or clinic for sperm, adult bargains are suddenly allowed by law to trump the child's natural right to know both his biological parents, wherever possible.

A whole lot of other rights and concerns get trumped as well. As the New York Post reported this week, "Conditions at New York City sperm banks are inconceivably bad -- with some offices not testing samples for some diseases, and others using sperm from donors who engaged in high-risk sexual behavior."

Idant Laboratories, reports the Post, fails to test sperm donors for some sexually transmitted and genetic diseases. One woman who used sperm from Idant Laboratories contacted the agency when she learned that her own son, and the child of another family that used the same donor, both suffered from autism.

Idant declined to contact the sperm donor on the grounds that autism is not a life-threatening illness. How many other children will this one man be paid to stud with his identity totally shielded by law -- hundreds potentially?

If we are going to revise all our laws to facilitate adult desires at children's expenses, the least we can do is require facilities that make money by making babies to keep records on whom the biological father is, and make those records available to children who turn 18.

If New Jersey legislators are going to impose this burden on birth mothers, the least they can do in justice is to make sperm-donor dads equally responsible.