Lt. Col. Tony Shaffer
|
Posted: Jul 09, 2019 2:02 PM
Share   Tweet
The opinions expressed by columnists are their own and do not necessarily represent the views of Townhall.com. 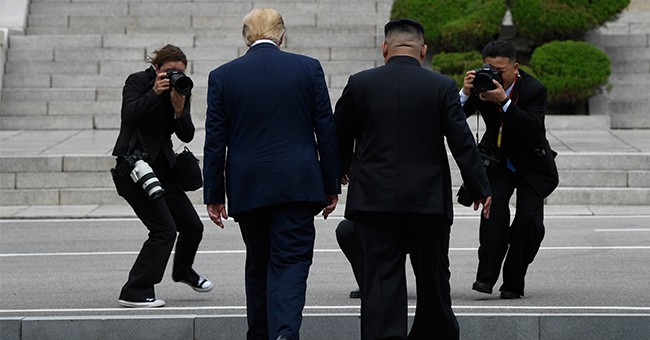 Everyone has seen the historic images on TV — with the upcoming 50th anniversary of Neil Armstrong’s walk on the moon and Richard Nixon’s call from the Oval Office on 20 July, I remember watching it all as a young child, in awe.

We recently had another historic first that was widely viewed — The President of the United States stepping into North Korea, the communist dictator stepping into the South — but those pictures can’t fully capture the true significance of the moment.

Donald Trump’s trip from the floodlit halls of the G20 Summit in Osaka, Japan to the overcast gloom of the Korean Peninsula's Joint Security Area had to be undertaken in secret. Unlike so much of the theater and ritual in modern international politics, this was 100 percent authentic.

The Demilitarized Zone (DMZ) is one of the most tense, dangerous locations on Earth. Two standing armies – the North Korean People’s Army (KPA) and the United Nations Forces led by the U.S. and South Korea – stand toe to toe on war footing, with an armistice in place since 27 June 1953. Miscalculations and provocations have resulted in armed exchanges over the years, and both militaries have been prepared to return to full blown war at a moment’s notice.

When President Trump stepped out over the Demarcation Line, he did so alone, boldly marching out to meet with Kim Jong Un and his fussing retinue. This was not a Hollywood moment where if it does not go well there is another take…this is literally life and death.

It was just yards from this spot that North Korean guards kidnapped a group of American soldiers in 1976 and hacked two of them to death with an ax as a “show of force.” That’s how touchy they were about the American troops trimming a tree that changed border post sight lines — 23 years after the truce. To say that the Joint Security Area is a place where pulses run high would be a gross understatement.

Even through the television screen, it was obvious that the North Korean soldiers were completely unaccustomed to and unprepared for the kind of openness and civility that the event demanded. Newly-minted White House Press Secretary Stephanie Grisham had to physically struggle with the communist guards inside a South Korean meeting hall, putting her body on the line to get them to reluctantly allow American reporters through.

This was cutting edge diplomacy, and Donald Trump was right there on the front line, both figuratively and literally. And with the political stakes so high, it required both moral and physical courage. I’ve walked the same ground, seen the same scene, and felt the palpable tension in the air.

I have it on good authority that several advisors urged the President not to make this attempt. Certainly no other President since the partition of Korea would have gone through with it.

But Donald Trump did not leave private life to follow in the timid footsteps of conventional politicians. He was not elected to “stay the course,” but rather to change direction and devise a whole new approach — to make things happen.

As it has in the past, President Trump’s boldness paid off. Democrats are complaining that his historic steps into North Korea were a mere “photo op,” but the real significance of the visit goes far deeper.

For more than 60 years, no American president has even had an opportunity for a gesture like this. Their options were just two: “get tough” by escalating sanctions, increasing military patrols, and so on, or seek “reproach” by trying to appease the hermit Stalinist state with economic aid. Both strategies have been tried repeatedly over the years, but neither has worked.

The peninsula remains divided, the North Korean people are still enslaved by their government, and the Kim regime has possessed nuclear weapons since the George W. Bush administration. But the old strategies that created the problems and failed to achieve progress cannot be expected to fix those problems. In situations like this, bold moves can make all the difference.

Think of Nixon’s trip to China, or, Soviet Premier Nikita Krushchev’s trip to the American heartland in 1959. Both trips would have been impossible for their predecessors. Neither achieved some great diplomatic breakthrough in and of itself, but they each broke down intangible walls that made peace and cooperation possible in the long run.

President Trump’s steps into North Korea will have the same kind of impact — we don’t know exactly where the road ahead may lead, but we can be confident that we’re headed in the right direction. In some way, North Korea’s self-imposed isolation from the free world changed forever when Donald Trump took that short, momentous walk across the border.

That moment in time, captured for all the world to see, was a risky but confident step forward by President Trump that will change the course of history.

Lt. Col. Tony Shaffer is a retired senior intelligence operations officer and President of the London Center for Policy Research.