Why the President is Dancing 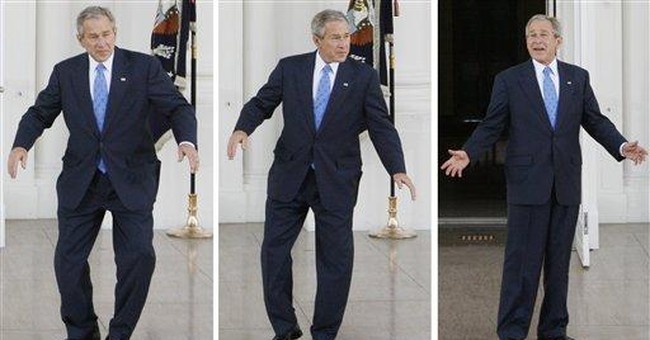 Am I the only one who’s noticed that George Bush is doing an awful lot of dancing lately?  Not a lot by Julianne Hough standards, but a lot for a President who said before dancing at his first inaugural ball of the night in 2005 that “it may be the first time in four years.”  But there he was, the President who doesn’t like to dance, doing a little soft shoe while waiting for John McCain at the White House this week.  A couple of weeks before that, he was shown in video all over the world dancing with President Ellen Johnson-Sirleaf in Liberia.

With $105 a barrel oil prices and the dollar at a record low, there are plenty of reasons to be concerned about the economy.  There are still troops in Iraq, and too many crazy people still determined to kill as many Americans as possible.  But even with the problems the President has to be concerned about, I can think of a few reasons George Bush might feel like dancing lately.

This week George Bush endorsed his former rival, John McCain, for President, while Barack Obama and Hillary Clinton continued to bloody each other in their quest to win the Democratic nomination.  It has gotten so bad that Hillary’s campaign is comparing Obama_to Ken_Starr. That alone is enough reason for any Republican to dance.  Not only has Hillary Clinton’s campaign gotten down and dirty, something which is hardly surprising, but now Barack Obama is firing back.  It is going to be hard for Obama to sling mud from up on that pedestal where he has been standing for so long.  He is going to have to step down to do it properly.  He certainly can’t leave it up to his surrogates.

Responding to Clinton’s ad showing a phone ringing in the middle of the night, Susan Rice, Obama's chief foreign policy adviser, did little to help her candidate.  “Clinton hasn't had to answer the phone at three o'clock in the morning and yet she attacked Barack Obama for not being ready,'' Ms. Rice said. "They're both not ready to have that 3 a.m. phone call."

It’s hard to keep from at least tapping your feet to that one. John McCain is definitely dancing to that tune.

In addition to Democrat infighting making Republican election prospects look much better than anyone might have dreamed a few months ago, there is one issue that Democrats were counting on that does not appear likely to help them any now.  Many believed the Iraq war would destroy GOP hopes to hold the White House.  Thanks to better than anticipated success of the “surge,” real progress is being seen in Iraq.  The public is even taking note of it.

Progress in Iraq is now indisputable – even though is it far from being as widely reported in the media as the failures there were.  Democrats’ attempts to first ignore and deny, and later downplay the progress seen in Iraq, now just makes them look out of touch with reality.  Even after being forced to acknowledge military accomplishments in Iraq, the Democrat candidates dismissed the progress as insignificant because it was military and not political in nature.    That strategy is not likely to be successful now that progress in Iraq is finally being seen on the political front.

Maybe it is not time to dance in Iraq yet, but it’s definitely time to acknowledge and celebrate the accomplishments of the past year.

President Bush’s other recent case of “happy feet” took place in Africa where he is evidently much beloved.  In a recent Time magazine article, Bob Geldof not only called Bush “curious and quick,” but he told the “Africa story” he says the American media have largely overlooked.

President Bush’s Africa story includes the President's Emergency Plan for AIDS Relief (PEPFAR).  Geldof wrote, “In 2003, only 50,000 Africans were on HIV antiretroviral drugs — and they had to pay for their own medicine. Today, 1.3 million are receiving medicines free of charge. The U.S. also contributes one-third of the money for the Global Fund to Fight AIDS, Tuberculosis and Malaria — which treats another 1.5 million. It contributes 50% of all food aid... On a seven-day trip through Africa, Bush announced a fantastic new $350 million fund for other neglected tropical diseases that can be easily eradicated; a program to distribute 5.2 million mosquito nets to Tanzanian kids; and contracts worth around $1.2 billion in Tanzania and Ghana from the Millennium Challenge Account, another initiative of the Bush Administration.”  I can certainly see why the Africans greeting Bush were dancing.

The President might be dancing because some of the things his administration is responsible for are finally receiving a bit of positive recognition, or because the prospects for Republicans holding the White House recently got a lot better, but I suspect there is another reason.  I have a feeling the President will be doing a lot more dancing between now and January 2009 because that is when he will be able to return to his ranch in Crawford.  Bill Clinton was reported to have been lost and despondent upon leaving the White House.  Leaving the White House made Clinton, who craves attention and approval above all else, miserable.  My suspicion is that leaving the White House will agree quite nicely with George W. Bush.  I can easily imagine him Texas two-stepping all the way home.