Close the Enthusiasm Gap With Straight Talk About Hope 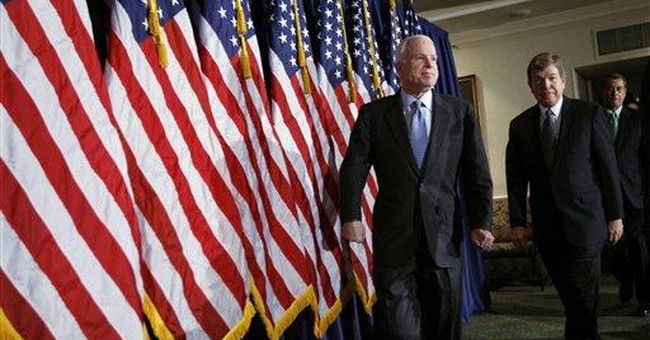 There is definitely an enthusiasm gap in the 2008 presidential election.  Obama has moved supporters to tears.  John McCain has too, but for different reasons. Hillary moved herself to tears – just when it was needed most.

With a string of eight consecutive state primary victories, Barack Obama has strong momentum. The excitement surrounding the candidacy of Obama goes beyond mere momentum though.  It is fueled by raw emotion and is going to be a powerful thing to beat.  Hope and change, like puppy dogs and sunshine, are hard to oppose.  So what are a former First Lady and Vietnam POW to do?   How do they capture some of that excitement, or at the very least find a way to dampen that Obamania?

Hillary has no shortage of excitement in her campaign, but as we saw in South Carolina and elsewhere, the kind of excitement her hubby Bubba created in the campaign was not the kind you want.  I guess the same could be said for the excitement he brought to the Oval Office.

Unfortunately for John McCain, the enthusiasm these days is on the Democrat’s race, particularly in the Obama camp. That is the downside of capturing the nomination early.  Not only is voter enthusiasm with the Democrats, but so is the media coverage.  As soon as it was clear Mike Huckabee did not have a chance to capture the nomination, there was not much of a story left to follow in the Republican race.

John McCain can’t bring excitement to his campaign through the remaining primary votes, but he does have another opportunity to create some suspense and excitement – with his choice of running mate. Vice Presidential choices are not generally known for generating a lot of excitement, except of the very short term variety.   An exception was Geraldine Ferraro’s candidacy in 1984, since she was the first woman to be part of a Presidential ticket.  She later created some problems for the ticket, as well, with questions about financial connections, but she did make history and generate some energy for the Walter Mondale candidacy.  Problems surrounding Vice Presidential choices typically draw more attention than any positives the candidate adds, but there are a couple of reasons this election might be a bit different.

One reason John McCain’s choice will be closely watched and greatly anticipated is his need to shore up the conservative base.  He can make all the promises he wants to Conservatives, but the only one he can actually deliver on before the election is his choice of running mate.  Conservatives will likely view the choice as an indication of whether or not McCain is serious about running and governing as a conservative.

Although the build up to the announcement of his decision will provide some excitement, after the decision is announced that excitement will be gone – unless he makes an exciting choice.  In spite of his limited experience holding elected office, Michael Steele is one of my favorite choices for Vice President.  Steele is an incredibly attractive candidate.  I saw him speak in person last year at the Civitas Conservative Leadership Conference (video) and he brought the room to their feet.  He is popular with Conservatives and the fact that he is black would create additional excitement as well.  His inclusion on the ticket would provide voters with something they rarely get -- the opportunity to vote for a black candidate more interested in talking about reality and results than in hope.

In fact, Steele spoke about “hope” in that speech last year and put the same thoughts into an_open_letter_to_the_Republican_presidential_candidates.  Steele wrote:

“For years, I sat in audiences and listened as politicians tried to win over voters, especially minority voters, by talking about hope.  "Hope is on the way”, “keep hope alive”, “hope you have a nice day!” But our communities demand more from its leaders than “hope” because hope by itself is not a strategy. Hope doesn’t protect you from terrorists, hope doesn’t lower your taxes, hope doesn’t help you buy a home, and hope doesn’t ensure quality education for your kids.  What we Republicans can speak to and the kind of leadership Americans demand (and we can provide) affords every citizen the opportunity to turn their dreams into reality and their hopes into action for themselves and their families. Without action, hope passively waits on others to solve problems. Without action, hope looks to next year instead of doing the hard work required today. Without action, hope is powerless to transform lives.”

That is the kind of “straight talk” we need about “hope.”  A McCain/Steele ticket would inspire enthusiasm in Conservatives, but also in Independent and Democrat voters who are hungry to hear someone speak in more than greeting card catchphrases and see them focus more on action than intent.  Regardless of who McCain chooses as a running mate, voters need to hear more straight talk about that.