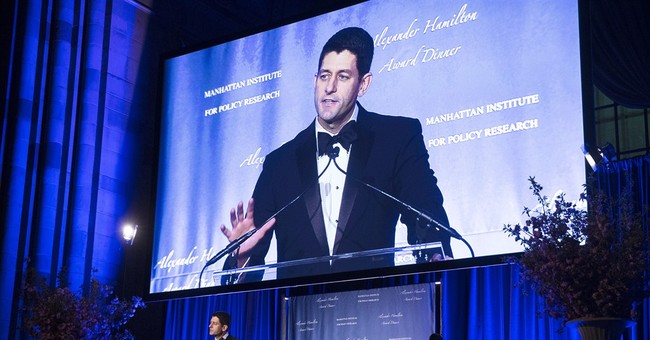 When the history of the 2012 elections is written, I hope it will show that my small part was being the first person to use the hashtag #VP90X when Paul Ryan was announced as the vice presidential nominee. Known for his wonkiness as much as his workouts, Congressman Paul Ryan is the rare person who isn’t afraid to buck the image of the one-dimensional politician.

In his new book, The Way Forward, Congressman Ryan moves beyond the usual talking points (and books by politicians) by identifying the underlining principles and problems, then challenging freedom-minded people to put aside their preconceptions in order to grow the movement.

One story from the book that stuck with me was when Congressman Ryan was on the 2012 campaign trail and worked with Bob Woodson, a civil rights leader and founder of the Center for Neighborhood Enterprise. Woodson had submitted a list of 20 community leaders he wanted Congressman Ryan to meet with while he and Gov. Romney were in Cleveland, Ohio. The campaign vetters were “worked up” when they discovered that five of the people had criminal records. When they called Woodson, he responded, “I’m shocked. I thought all of them had criminal records!”

The vetters, worried about the security risk, reported back to Congressman Ryan, who said they should still be invited. Congressman Ryan said, “If Bob trusts them, then so do I.”

At the event, he writes about an encounter with one of the men, who was also named Paul. Congressman Ryan wrote,

At the end of our gathering, Paul walked over and asked me if he could lay his hands on me to pray.

Paul’s head was shaved and he had tattoos up and down his arms. He’d arrived at the event on the back of a motorcycle, and he had just gotten done explaining that he’d once had a violent streak. As he approached me, I could see the Secret Service agents out of the corner of my eye; they were exchanging nervous glances.

Paul put his hands on my shoulders. He asked God to give me strength to fulfill my mission and be a vessel for His work. When I opened my eyes, they had welled up with tears. Even the Secret Service guys seemed touched.

Republicans will be returning to Cleveland for the 2016 National Convention. We’d do well to learn from Congressman Ryan’s story and welcome those who may come different backgrounds, but share our mission for freedom.

One of my all-time favorite movie lines is from The Good, the Bad, and the Ugly. , when Blondie says to Tuco: “You see, in this world there's two kinds of people, my friend: Those with loaded guns and those who dig. You dig.” It’s classic Clint Eastwood, but I wouldn’t dare say it to anyone.

Professor Richard Hart taught macroeconomics at the Miami University of Ohio. He introduced me to so many great thinkers, and he recommended that I read “the Austrians,” like Friedrich Hayek and Ludwig von Mises. He also gave me a copy of National Review, which I fell in love with. He taught me about economics and helped get me interested in politics and conservatism.

I would do a couple of different things, depending on the time of year. I would be a hunting guide in the fall, a member of the ski patrol in the winter, and a fishing guide in the spring and summer.

4. Tell me about a public or private moment when you thought to yourself, “This is what Elvis felt like every day.”

One that comes to mind was delivering the Republican response to the State of the Union in 2011. You’ve spent hours practicing, trying to get everything just right. Then the room falls quiet, and they count you down: 5, 4, 3, 2, 1. This red light above the camera goes on, and suddenly, you’re speaking to America. I imagine Elvis got used to that kind of pressure after a while, but I don’t know if I ever will.

A bow and arrows to my kids.

My mom used to always tell me that “you have two ears and one mouth; use them in that proportion.” My dad told me that “you are either part of the problem or part of the solution.” And I’ve taken both pieces of advice.

GOP on track to retake the Senate and expand majority in the House.

12. Tell me about a moment you decided to enter the political arena.

It wasn’t exactly one moment, but a series of them. Mark Neumann was a Janesville guy who represented my home district in the House. He decided to challenge Senator Russ Feingold in the 1998 election. We were talking, and he asked if I’d consider running for his seat. At first, I thought it was crazy, as I was just twenty-seven years old and was determined to go to grad school. So I slept on it and called my mentor Jack Kemp to ask for his thoughts. He said: “You should do it. I’ll write the first check.” Then I called Bill Bennett, who said he’d write the second check. A bit later, I talked with Sam Brownback, who reminded me that I got involved in public policy to make a difference and this was a chance to do precisely that. So after talking with them—and after getting my mother’s blessing—I decided to give it a shot.