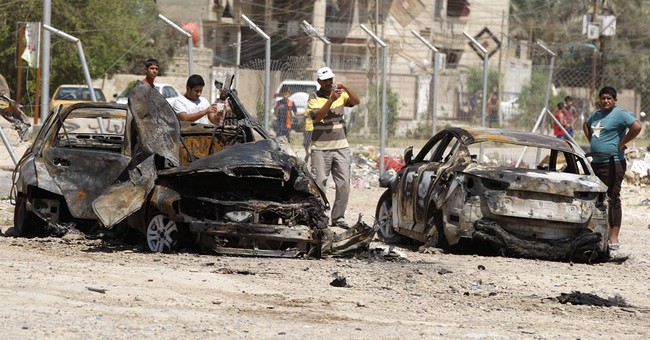 Summer may be winding down, but there are still a few weeks left to relax with a good book at the beach or on a hammock in the shade. Luckily, Middle Man by David Rich is out this week to take you into Labor Day weekend.

In the sequel to Caravan of Thieves, the story follows Lt. Rollie Waters in a mission to find the graves of American soldiers that contain money from Saddam Hussein’s regime during the second Iraq War. Posing an investment banker, Waters sets out to find out who perpetrated the scheme. Waters’ journey has him imagining conversations with his deceased father, a con man killed because he was suspected of stealing the money his son is now hunting down in Iraq. New York Times best-selling author Ace Atkins said, “From the first bullet to the last, Middle Man is Ludlum-style action at its best. After reading it straight through, I'm now looking forward to Lieutenant Rollie Waters' next assignment.”

Rich began his writing career in Hollywood, where he wrote several episodes of “MacGyver” and “Stargate SG-1,” as well as the feature film “Renegades” with Kiefer Sutherland and Lou Diamond Phillips.

His new book, Middle Man, is fast-paced and filled with twist and turns to make the most of the last weeks of summer.

If I were President I would try to sneak out of the White House whenever I could, just call 'road trip,' and head out for some corner of the country where no one expected to see me. Think of the relief it would be to get away from the know-it-alls in D.C.

Donald Pizer was a professor of American Literature and I took two courses from him in college. About half way through the first course I began to notice how sharp and precise he was. He was patient, organized and thorough, and eventually it dawned on me that I was learning much more than what critics thought of Stephen Crane, I was learning how to think, how to approach the world. I think about him all the time and the relentless, careful way he pulled each issue out the pile and examined it.

I’ve been stuffed with cheeseburgers, but not barbiturates. I have never had groupies or an entourage. But I can remember the first time I was hired to rewrite a script and how eager I was to remake it the way I thought it should be, to have the flow and the tone I felt would transform it into a special movie. That is the way I imagine the early Elvis felt: he heard things his way and wanted to let everyone know.

This really qualifies as non-news: “Bar Rescue.” As soon as I got my graduate degree I became a bartender and worked at all sorts of different places across the country. We could have used that show a couple of times. The host is a nasty bully. It’s very enjoyable to watch the drunken owner or the skirt chasing manager try to pretend everything is okay. I don't expect this to stay a pleasure for long, though.

6. What’s the best present you ever received?

A teacher in college gave me a copy of Kipling's "Kim." It wasn't a matter of which book she gave me, it was the fact that she knew who I was and thought about it. I was caught completely off guard, thought I was anonymous until then.

Saddaharu Oh, the Japanese baseball home run champion, wrote an autobiography with the help of David Falkner (Saddaharu Oh! A Zen Way of Baseball). I gave it to a friend who was having a difficult time with his teenage son who played baseball. But the book is about much more than baseball. It’s about determination, concentration, making the effort to improve a part of every moment of every day.

My parents gave up giving me advice out of frustration. Moderation in all things, you can't fight city hall, never wear brown shoes with a blue suit... I had to figure it all out my own way.

P.J. O’Rourke and Christopher Buckley are two of the funniest people in the country.

I’m taking my time with Hitch 22 by Christopher Hitchens and in between doses of that I’m reading an Ian Rankin thriller and a Peter Robinson Inspector Banks novel.

I take it you mean other than: “Middle Man by David Rich hits the bestseller list.” I would settle for this: ‘Economy Booming, Jobless Rate Hits Bottom.’ Being unemployed is terrible and the ripples from mass unemployment spread into many aspects of life. If the headline said, ‘Peace in Middle East’ I would know it was a lie.

12. Tell me about the moment you decided to be more vocal about your political beliefs.

I’m moving in the other direction – toward holding back. I like to let people speak their minds. They often make assumptions about what I think and lately I don't correct them. A lot of interesting stuff comes to light that way.