According to Data from the CDC, Youth Vaping Has Not Led to Smoking

Lindsey Stroud
|
Posted: Sep 22, 2021 2:00 PM
Share   Tweet
The opinions expressed by columnists are their own and do not necessarily represent the views of Townhall.com. 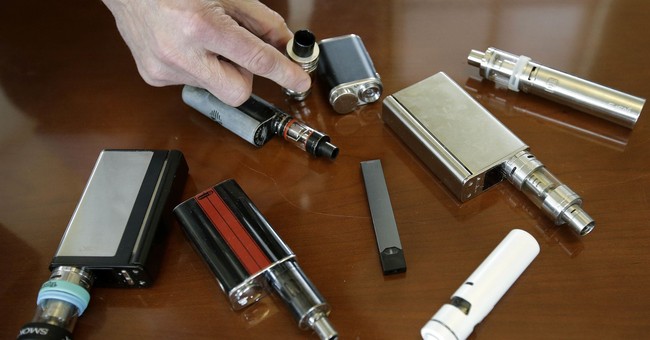 The Centers for Disease Control and Prevention (CDC) have updated their Behavioral Risk Factor Surveillance System (BRFSS), their annual survey to gauge health and behaviors of American adults. The CDC has been collecting this data since 1995 and numerous public health groups including Campaign for Tobacco-Free Kids (CTFK) rely on the annual survey to determine the number of smokers in a given state.

The great news this year is that smoking levels among adults are at their lowest levels ever. In 2020, just more than 15 percent of adults were considered current smokers. This is a 37.1 decrease from 1995 when 22.7 percent of American adults smoked. There’s even better news. Among young adults aged between 18 and 24 years, smoking rates have plummeted. In 2020, a record low 9.6 percent of current adult smokers were aged 18 to 24 years old. This is a 59.5 percent decrease from 1995 when 23.7 percent of current smokers were considered young adults.

But what is most interesting is how significantly these rates have dropped since the introduction of e-cigarettes into the U.S. marketplace. For those unaware, the first e-cigarette came to America in 2007. The U.S. Food and Drug Administration (FDA) fought to block the products from being sold to market. In 2011, a federal judge gave the agency authority to regulate vapor products as tobacco products. In 2016, the FDA deemed e-cigarettes as tobacco products and subjected them to onerous regulations, including a premarket tobacco product application, which the agency is currently determining.

In 2008, the year after e-cigarettes were first introduced, 23.4 percent of American smokers were 18 to 24 years old. By 2018, the same year that the CDC declared a so-called youth vaping epidemic, that number had decreased by 43.6 percent to 13.2 percent of smokers being young adults. Interestingly, in the two years after the shot-heard-round-the-tobacco-control-world regarding youth vape use, smoking rates among young adults have decreased by more than 27 percent. In essence, while public health may have decried a vaping epidemic, they failed to recognize the eradication of smoking among young adults.

The BRFSS should also help settle the argument that youth vaping leads to smoking. The data in this government-ran study indicate otherwise. Even though youth vaping should be discouraged, youth vaping may have led to the extinction of young adult smoking.  Further reduction may be possible, but only if policymakers embrace the powerful disruptive technology that e-cigarettes have been on reducing smoking rates.

The alarmism about youth vaping and an uptick in smoking can be dated back to 2013 when then-CDC director (and one of Michael Bloomberg’s dearest friends) Dr. Thomas Frieden sounded the alarm about youth e-cigarette use. He declared that such use is “troubling” and that “teens who start with e-cigarettes may be condemned to struggling with a lifelong addiction to nicotine and conventional cigarettes.”

For some reason this bothered the anti-tobacco movement. For example, on the “Electronic cigarette” webpage on the Bloomberg-funded CTFK website, the organization claims that e-cigarettes don’t help persons quit smoking and that “some studies have found that young people who use e-cigarettes are more likely to become smokers.” In 2019, CTFK president Matt Myers testified before Congress saying there was “substantial evidence that e-cigarette use increases risk of ever using cigarettes among youth and young adults.”

Not only is this grossly inaccurate, it only adds to the increased misinformation about reduced harm tobacco products. Not that it comes at any surprise, both the CDC and CTFK wantonly used the vaping-related lung injury spat of 2019 to increase the alarmism over the novel tobacco products.

Given that e-cigarettes had been in the U.S. for more than a decade by then, the outbreak was fishy and many were able to link vaping-related lung injuries to devices containing illicit tetrahydrocannabinol (THC), the psychoactive ingredient in marijuana. Instead of informing the public from the onset that such injuries were overwhelmingly related to non-nicotine vape products, both organizations grossly blurred the products into just vaping devices. In the aforementioned testimony, Myers mentioned that some patients reported using only nicotine. A November 2019 Morbidity and Mortality Weekly Report noted that THC was found in three patients that had reported exclusive nicotine use. The CDC waited until December 2019, almost four months from the start of the outbreak, to inform the public that the majority of cases (56 percent) were related to a fake-THC vape brand, DankVapes.

Policymakers should not be misinformed by both Bloomberg- and taxpayer-funded public health groups that have demonized e-cigarettes since their introduction. Fortunately, Dr. Frieden was incorrect, and smoking rates are at all-time lows, especially among young adults.

Rather than relying on the scaremongering, officials ought to examine how e-cigarettes have reduced smoking rates and embrace tobacco harm reduction.