Rubio Is the Future of the GOP 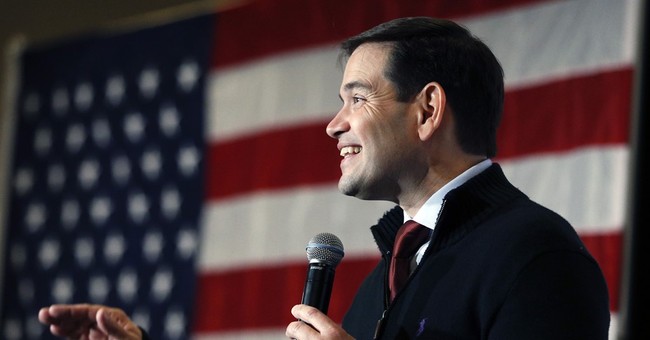 Marco Rubio may be the most gifted natural politician to come out of the GOP since Ronald Reagan. But the GOP base seems in no mood to rally around a principled conservative who happens also to be an optimist. That may change, but it hasn't yet. The problem is, Rubio is competing in a primary with two demagogues willing to say pretty much anything to win; several other candidates long on experience but with little personal appeal; and one neurosurgeon who should stick to medicine.

Donald Trump tapped into a deep well of anger in the Republican grassroots, driven by fear and insecurity. Trump tossed red meat to the angriest among them, raising the specter of Mexicans crossing the border to steal jobs and rape women, of Chinese cheating us on trade, of Muslims all wishing we were dead and many willing to kill us if allowed in.

Now Ted Cruz is trying to dip into that same well, with twice the intellect but half the charm of Donald Trump. Cruz would like the nativist wing of the party to feel he's no different from Trump on immigration -- and that he's always been there with them.

He reiterated this position in an interview with the Texas Tribune in 2013, saying: "The amendment that I introduced removed the path to citizenship, but it did not change the underlying work permit from the Gang of Eight." Cruz opposed a path to citizenship, a position remarkably close to Jeb Bush's 2013 in a book Bush co-authored, "Immigration Wars: Forging an American Solution." Cruz also told a group of Princeton students that year, "I want to see common sense immigration reform pass. ... I believe that if the amendments I introduced were adopted, the bill would pass. My effort in introducing them was to find a solution that reflected common ground and fixed the problem."

Cruz has changed his position since then -- which happens. People change their minds. But why lie about it?

Unlike Cruz, Marco Rubio admits he's shifted his position on immigration reform since 2013. Rubio says the framework of the 2013 legislation lacked enough teeth. Now he wants some proof that the border has been secured before he would allow legalization.

Secondly, but most importantly, Rubio wants to fix our broken legal immigration system, which is the only real solution to stemming illegal immigration. The reason that the Reagan amnesty didn't work was because the 1986 law provided no way for enough skilled workers -- without whom our economy cannot grow and prosper -- to migrate legally as temporary workers or permanent residents.

Rubio still personally supports allowing those who make it through any future legalization hurdles (fines, taxes and background checks) to be eligible to become citizens. Agree or disagree with him about the policy, Rubio showed real character by not obfuscating or changing his position in Tuesday night's debate to curry favor. Some supporters, however, worry that his answer may cost him the nomination. I hope not -- less because of what it would do to Rubio's future than what it means for the future of the Republican Party.

I became a Republican 35 years ago because of Ronald Reagan. I didn't agree with him on everything, but he offered me a vision of America that was hopeful and uplifting. When he encountered those who disagreed on policy, he attempted to persuade them. He didn't compromise his principles, but made the case for why those principles mattered. As a former Democrat, I found myself convinced, as did millions of others.

If the Republican Party ever hopes to become the majority party in this country again, it can only do so with leaders that reach out to, not push away, those who don't yet agree with us, and persuade them using the best arguments. Ronald Reagan built a Republican majority by drawing people in. Marco Rubio could do it, too -- if enough primary voters can tune out the demagogues.