The Nonissue in This Campaign 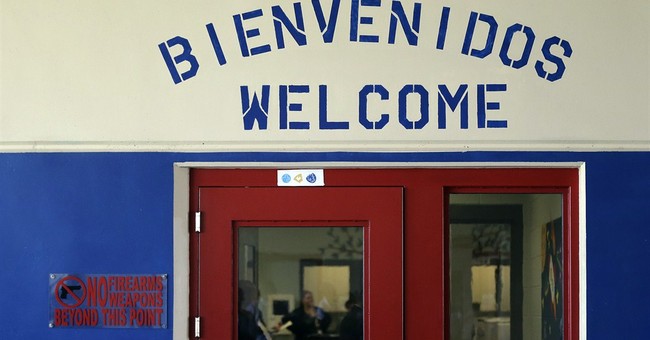 One of the surprising and welcome shifts in the political landscape this election cycle is that high-profile Republican candidates, by and large, have not made opposition to immigration reform a major focus of their campaigns. With the exception of incumbent Sen. Pat Roberts in Kansas and challenger Scott Brown in New Hampshire, most GOP candidates haven't been beating the anti-illegal immigration drum to drive their base to the polls.

But even these notable exceptions suggest that immigration doesn't carry quite the punch it once did. Both Roberts and Brown invoked the specter of illegal immigration when they became desperate to turn around flailing campaigns -- a tactic Democratic challenger Alison Lundergan Grimes has also tried in Kentucky, claiming Minority Leader Mitch McConnell is pro-amnesty.

Why the difference in tone in this election?

First, it has little to do with wooing the Hispanic vote -- at least not this cycle. Colorado is the only competitive state this year where Hispanics are a significant portion of the electorate. But immigration as an issue has been a non-factor in what is a very tight race between incumbent Democrat Mark Udall and his GOP challenger, Rep. Cory Gardner.

The fact that immigration isn't the hot-button issue it was even two years ago is good news for both the Republican Party and the country. If Republicans actually win control of the Senate on Nov. 4, which seems increasingly likely, the lowered temperature will provide them the opportunity to tackle policy without risking their political fortunes. Whether they will seize the opportunity remains to be seen.

The good news is that of all the difficult issues facing the country, immigration is one that lends itself to solution and on which there is considerable consensus among Americans across the political spectrum.

By large margins, Americans support immigration reform that includes a pathway to citizenship for the 11 million illegal immigrants currently living here. Some 60 percent of Americans (including a majority of Republicans) favor a path to citizenship, with another 17 percent supporting legal status as an alternative. These numbers have remained constant over the past year, according to tracking polls by the Public Religion Research Institute.

But giving legal status to the 11 million people here illegally is only part of the solution. The bigger issue is enacting legal immigration reform -- and here the Republicans, if they're smart, should be able to fashion policies that would be good for the nation and their own political futures. PRRI's polling data show that a majority of Americans believe immigrants are good for the country. By nearly 20 points, more Americans (54 percent) believe immigrants "strengthen our country because of their hard work and talents" than that they "are a burden because they take our jobs, housing and health care" (35 percent).

Immigration is not going to go away as a policy challenge, even if it becomes less potent as a political issue. Immigration 2020, a gathering of some 200 business, religious and civic leaders who met in Washington this week under the auspices of the National Immigration Forum, focused on the importance of immigration to the future of America. Although the meeting drew participants across the political spectrum, there was broad agreement that any reform must encompass three principles: We must expand opportunities for everyone, foreign- and native-born alike, if we are to prosper as a nation. Improving immigrants' skills so that they contribute more to our economy will help all Americans thrive. Legal status helps ensure that those who are already here integrate fully into the American mainstream, building vibrant communities and healthy families.

If Republicans use these principles as building blocks to fashion an immigration policy for the future, they'll improve their own prospects with voters and also help the nation. Whether through discipline or geographic accident, the GOP has managed to avoid the minefield of immigration politics this time around. But 2016 won't be as easy, and the outcome of that election may well depend on how successful Republicans are in using their enhanced congressional numbers to pass meaningful immigration reform.