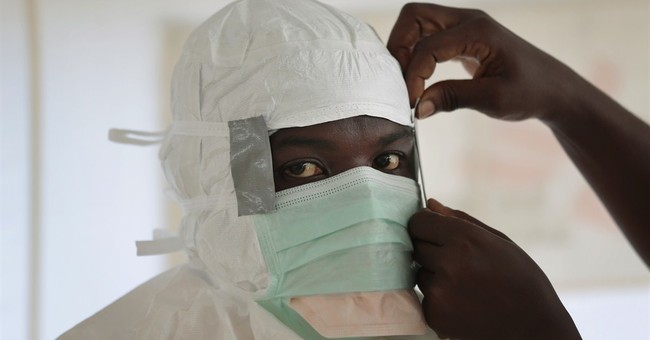 Trending
It's time to take a deep breath. Ebola is an awful disease that has tragically infected a handful of Americans. Though it deserves the full attention of our medical community -- most importantly, the Centers for Disease Control and Prevention -- it should not be dominating our news, preoccupying our president and other political leaders, and frightening Americans into believing an epidemic on U.S. soil is just around the corner.

A Washington Post poll this week showed that two-thirds of Americans fear an epidemic in the U.S., and 4 in 10 said they are somewhat or very worried that a family member may contract the disease. This is simply not going to happen.

The disease can only spread through direct contact with the bodily fluids of an infected person. The Dallas hospital that treated Thomas Duncan botched procedures in dealing with the disease from day one -- but as terrible as those mistakes were, they do not portend disaster for the country.

At times like these, it is usually helpful for our leaders to try to calm the fear. But unfortunately, President Barack Obama has so squandered the trust of the American people over the past six years that the more he talks the less people seem to believe him. Nonetheless, he was right when he said, "The dangers of your contracting Ebola, the dangers of a serious outbreak, are extraordinarily low."

Our fears are irrational. Statistically, most of us have a far greater likelihood of dying of influenza this winter than Ebola. Last year, about 30,000 people died of the flu in the U.S., yet less than half of Americans get flu shots, which can prevent the disease. Getting struck by lightning is likelier than catching Ebola. So far this year, 24 people have died from lightning strikes in the U.S.; one has died from Ebola.

So why are we so afraid? Ironically, the very measures necessary to protect those in actual danger of contracting the disease frighten the rest of us. Photos of men and women covered in hazmat suits dominate the airwaves and front pages of newspapers. The streets of Dallas outside the patients' apartments and the tarmac at the airport where patients are being transported look like scenes from a science fiction movie. Creatures in bright yellow scuttle about squirting disinfectant on sidewalks, their faces obscured by masks. A new patient hobbles from an ambulance to a medical transport plane looking as if she's just landed after a dangerous journey to outer space. And these images play in a constant loop on our living room TVs.

At one level, this phenomenon is nothing new. We saw it in the early days of the AIDS epidemic. We've seen it every time a new threat emerges -- swine flu, bird flu, SARS, MRSA, even mad cow disease. People fear what they cannot see and do not understand. But worse, the media's intense preoccupation with Ebola in the U.S. fuels fear. The attention focused on this story is simply disproportionate to its importance.

None of this is to suggest that the federal government's response has been exemplary. It hasn't. The CDC has sent inconsistent messages to health care workers and to the public. Its latest failure -- telling a nurse who had treated Duncan that she could travel aboard a commercial airline despite having a fever -- not only was wrong but also undermined the credibility of the agency. But it is highly unlikely that anyone on the plane is in real danger, even though the nurse has tested positive for Ebola. Unless there was contact with the woman's bodily fluids, transmission was highly improbable, if not impossible.

If we really want to protect ourselves from Ebola, our concentration should be focused on Africa. It is the geometric expansion of the disease in Liberia, Sierra Leone and Guinea that poses a real threat. We must stop the spread of the disease there. And that will require a greater effort on the part of the United States and other countries, including well-enforced quarantines and travel limits.

Regardless of what we do, it is likely we will see more cases of Ebola in American hospitals. The goal must be to provide the best treatment possible, to protect health workers who will come in contact with patients and to concentrate treatment in as few medical centers as possible.

The one thing the media could do to help is to quit treating Ebola as if it is the most important story of the day.