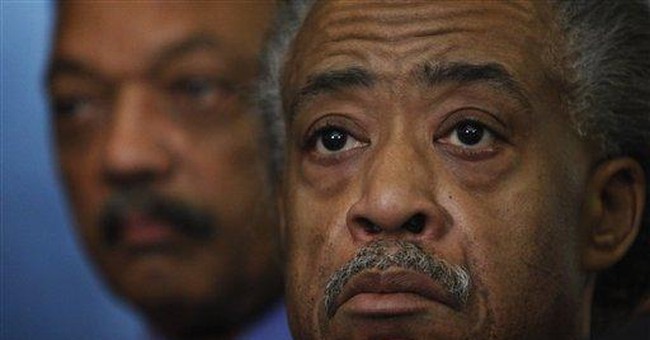 I am no fan of thugs or wannabes in professional sports, but NBA Commissioner David Stern is making Washington Wizards guard Gilbert Arenas a scapegoat for Stern's own past inaction in dealing with violence among NBA players. Stern announced this week that he was indefinitely suspending Arenas, saying that Arenas "is not currently fit to take the court in an NBA game."

Stern's action ostensibly stems from an incident involving Arenas bringing unloaded guns to the Wizards locker room in December and then joking about the incident. But the real impetus seems to be some effective mau-mauing on the part of Al Sharpton, who claims to have called Stern personally to pressure him to get tough with Arenas. Sharpton has suddenly become interested in reducing violence in the black community. Now that's a noble goal, but Sharpton is rather late in coming to the conclusion that black-on-black violence is a major issue, having spent much of his career fanning the flames of racial hatred.

Sharpton has yet to renounce his own role in provoking an arson attack against a Jewish storeowner in Harlem in 1995, which killed seven victims; or his involvement in the Tawana Brawley hoax, in which a 15-year-old girl falsely accused six white men, including police officers, of having abducted, raped and tortured her; and dozens of other similar incidents. Listening to the likes of Sharpton suggests Stern is the one not "fit" to keep his job.

There is no question that Arenas made a mistake, and one that requires some penalty, but his actions both on and off the court belie the notion that he is some gang-banger wannabe inspiring young black men to violence. Neither David Stern nor Al Sharpton seems to have a clue as to who Gilbert Arenas really is. Unlike so many of his colleagues in the NBA, Arenas is a model citizen: a family man; a philanthropist who gives not only money but his time to helping underprivileged kids in D.C.; a man who showed up in person at the D.C. Armory with $18,000 in clothing and toiletries to help Hurricane Katrina victims; a man who donated $100 for every point he scored to DC area schools, raising $215,000 in one season. He doesn't do this stuff for publicity but because he believes in giving back to his community.

But Stern's actions aren't just misguided given Arenas' character. Stern has repeatedly dealt with far more egregious behavior on the part of NBA players by doing nothing or with slaps on the wrist. Just this season, Cleveland Cavaliers player Delonte West was pulled over for driving recklessly and cutting off a police officer. West was arrested when police found a loaded Beretta 9mm in his waistband, a loaded Ruger .357 magnum strapped to his leg, and a loaded shotgun slung over his back. Yet Stern never suspended West. And he only suspended NBA players Stephen Jackson, who fired a gun outside a strip club in 2007, for seven games, and Sebastian Telfair for two games for carrying a gun aboard a team flight in 2006.

However, that was before Sharpton pressured Stern. Why is Stern even listening to a guy who fanned anti-Semitic riots in Crown Heights, N.Y., saying, "If the Jews want to get it on, tell them to pin their yarmulkes back and come over to my house" and referring to Jews as "diamond merchants." Nor has Sharpton changed his tune; in the last presidential campaign, he said of Republican candidate Mitt Romney, "As for the one Mormon running for office, those who really believe in God will defeat him."

Instead of listening to Sharpton, Stern should spend some time getting to know the players whose lives he exerts such control over. He's passed judgment on Arenas before all the facts are fully investigated. If Stern were a judge passing sentence on someone accused of a crime, he'd hear from character witnesses and try to assess whether the behavior was indicative of a single mistake or part of a worrisome pattern that deserved harsh justice. Arenas does not deserve to have his career ended by a single -- if admittedly awful -- incident of bad judgment.

Arenas has shown time and again that he's one of the good guys in the NBA, and there are all too few of them to see him pay the price for Stern's failure to deal with those who deserve to be sent packing. Stern should give him another chance. He's worth it.