Judge Sotomayor and the Diversity Crowd 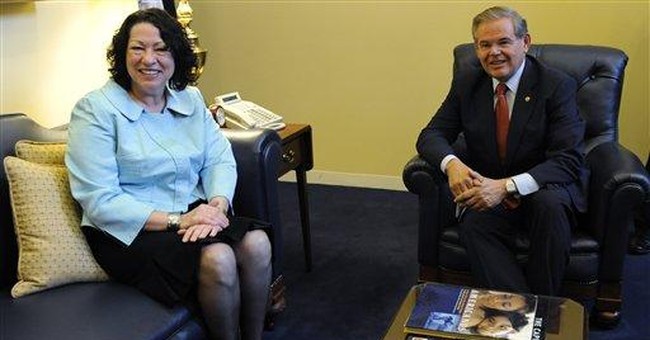 The diversity crowd doesn't really believe in diversity. In fact, what they're really aiming for is conformity of opinion. They expect that members of racial and ethnic groups will adhere to liberal orthodoxy, and woe to those who don't fall into line. If Judge Sotomayor were a conservative or the nominee of a Republican president, we'd be hearing that she wasn't an "authentic" Latina at all.

I recall similar arguments used by my critics when I was the first Latina nominated to a U.S. Cabinet back in 2001. You're only celebrated as the "first" by the diversity crowd when you're the first Democrat. Just ask Colin Powell, Condoleezza Rice, Spencer Abraham, Elaine Chao, Bobby Jindal, or Michael Steele.

As someone whose profession entails having opinions, perhaps I shouldn't be surprised by how often I've been asked what I think about Judge Sonia Sotomayor's nomination to the Supreme Court. What is surprising, however, is that many of those asking the question seemed less interested in my analysis of the judge's judicial record than in whether I felt any special pride in her appointment because of our shared ethnicity.

I could see their puzzlement as I recounted some of Judge Sotomayor's rulings. I was clearly missing the point of their inquiry: She's an Hispanic woman; I'm an Hispanic woman. We both grew up in disadvantaged circumstances but managed to overcome our humble beginnings. We must be simpatico, right? Wrong.

Apparently it comes as a surprise to some people, but not all Hispanics (or women) think alike. Why should race, ethnicity, gender, or even class determine one's point of view on political or legal issues? What's more, when it comes to Hispanics, there is often not even a single, shared culture that might create a common bond.

As L.A. Times columnist Gregory Rodriguez recently pointed out, most of the people described as Hispanics -- or Latinos, the term Rodriquez prefers -- don't identify with the catch-all term, but think of themselves in terms of their national origin (Mexican, El Salvadoran, Puerto Rican, etc.). Not surprisingly, most immigrants regard their country of origin as important in their identity.

But for most Hispanics who were born in the U.S., our primary identity is as Americans. In the largest poll of its kind in 2002, nearly 60 percent of third-generation Hispanics used the term "American" as either the only or first term to describe themselves, and 97 percent said they use American to identify themselves at least some of the time.

Still, the media and most politicians seem to think Sotomayor's ethnic heritage and gender are relevant to the story of her Supreme Court nomination. She's the first female Hispanic to be named to the highest court in the land, and that must mean something, the thinking goes. But what? Frankly, it was only a matter of time before an Hispanic reached the Court. True barriers -- meaning disqualifications based on race, ethnicity or gender -- simply don't exist anymore.

Most ordinary Americans seem to have caught on to this phenomenon faster than elites, which may be why they are becoming increasingly skeptical of the idea that we need government policies to enforce "diversity." A new Quinnipiac University poll taken after the Sotomayor nomination shows that 70 percent of Americans are opposed to granting preferences to minorities or women in hiring in order to promote diversity. Even members of some of the groups granted such preferential treatment seem unenthusiastic about it. Hispanics, for example, overwhelmingly oppose preferential treatment in government hiring in order to promote diversity, 58 to 38 percent. But they split more evenly when the question is phrased in the more nebulous terms of "affirmative action" in hiring, promotions, or college admissions, with 48 percent opposing and 47 percent favoring affirmative action for Hispanics.

Which brings me back to Judge Sotomayor's nomination and my reaction to it. I doubt that those clamoring for more diversity on the Court would be thrilled if the nominee were an Hispanic (or Asian or black or Muslim or gay) woman whose views were closer to Justice Antonin Scalia's than Ruth Bader Ginsburg's. I don't remember many diversity devotees cheering Clarence Thomas' appointment -- even though his life story trumps Sotomayor's in the overcoming hardship category.

The next time someone asks me what I think about the Sotomayor pick, I'll say: It's not about a black president picking an Hispanic woman to replace a white man on the court. It's about a liberal president choosing a liberal jurist to replace a retiring liberal justice. It's not diversity; it's more of the same.