Redefining the Problem Won't Make It Go Away 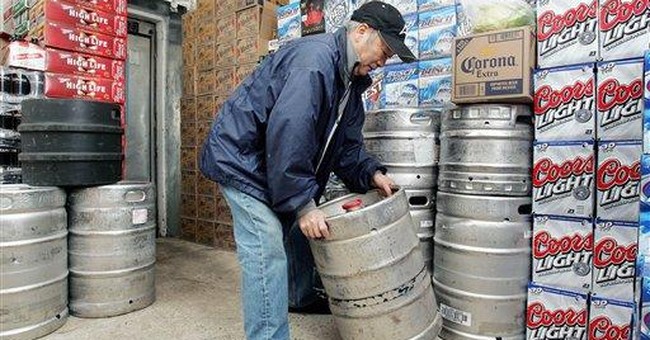 If ever we needed proof that having an advanced degree doesn't correlate with common sense, we got it this week. A group of college presidents from some of the most prestigious schools in the nation have called on lawmakers to consider lowering the drinking age. They call their effort the Amethyst Initiative. Why Amethyst? On their website, the erudite group explains to those of us who aren't fluent in ancient Greek, the word is derived from the prefix "a" -- meaning not -- and "methustos," which means intoxicated.

"Twenty-one is not working," the group claims. "A culture of dangerous, clandestine "binge-drinking" -- often conducted off-campus -- has developed," they say, as if the law prohibiting underage drinking has created this culture. Apparently the group believes that if we'd simply lower the drinking age to 18, college students will magically stop binge drinking.

By that reasoning, why not lower the drinking age to 14? That way, we could wipe out binge drinking among high-school students as well. Heck, maybe we could cure alcoholism by eliminating age limits on drinking altogether. Start kids early and they'll learn to drink responsibly, right?

The facts suggest otherwise. According to a 2007 survey by the U.S. Surgeon General, 45 percent of high-school students reported drinking alcohol within the previous month, and more than one in four said they were binge drinkers. In 2005, drinking led to 145,000 emergency room visits by kids 12 to 20 years old for injuries related to their drinking. Of the nearly 7,500 traffic deaths involving 15- to 20-year-olds in 2005, more than 2,000 had been drinking. And young people who start drinking before they turn 15 are five times more likely to become problem drinkers or alcoholics later on.

Lowering the drinking age to 18 won't solve these problems -- and would likely make them worse. So why do these college presidents want to open this Pandora's box? It's simple. They don't want to be responsible for enforcing the law on their campuses.

Back in the Dark Ages when I started college (1965), colleges assumed the role of in loco parentis, acting in the place of parents for students who were not yet adults. By 1970 when I graduated, most universities had dropped virtually all the old rules. Once forbidden to do so, students were allowed to entertain members of the opposite sex in their dorm rooms (and soon, those dorms would be co-ed). Curfews were gone. Indeed, the only behavioral rule colleges seemed willing to enforce after the tumultuous Sixties was the prohibition against drinking on campus. Now, more than 100 college presidents have asked to be alleviated of even this responsibility.

College should be a time for students not only to acquire knowledge and earn a degree but to form character. College presidents could help fulfill their role in that endeavor by promoting less, not more, alcohol on campus. The National Institute of Medicine and the National Research Council have outlined several proposals to reduce underage drinking. Among their recommendations are increasing alcohol taxes, reducing youth exposure to alcohol advertising, and enforcing underage drinking laws more aggressively, not less. And they call on colleges and universities to collaborate and implement programs to prevent underage drinking.

The average cost of a four-year public college was nearly $13,000 a year in 2006 and more than $30,000 for a private college. You'd think for that kind of money we could get college presidents to do something as simple as to discourage underage drinking on their campuses. Instead, too many don't only look away but want to define the problem out of existence by lowering the legal drinking age.

Alcohol abuse is a serious problem in our culture. It ruins lives and kills thousands of Americans every year on our streets and highways. Alcohol devastates the health and well-being of those who abuse it and destroys innocent family members. We need to do everything we can to discourage drinking, especially among the young. The last thing we need is a bunch of college presidents to pretend that redefining the legal drinking age is a step in that direction.

Three Words That Describe Liz Cheney's Political Situation Right Now
Townhall
'The drop CNN is experiencing is profound': CNN's ratings drop from January is stunning
Twitchy
Here Is Why the Democrats Are Totally Panicked About the Arizona Audit
Redstate
Texas Attorney General Ken Paxton Weighs In On Dangerous Plano Incident In Which BLM Traps Motorists and Brandishes a Weapon at Them
PJ Media