Lennie Jarratt
|
Posted: May 05, 2016 12:01 AM
Share   Tweet
The opinions expressed by columnists are their own and do not necessarily represent the views of Townhall.com. 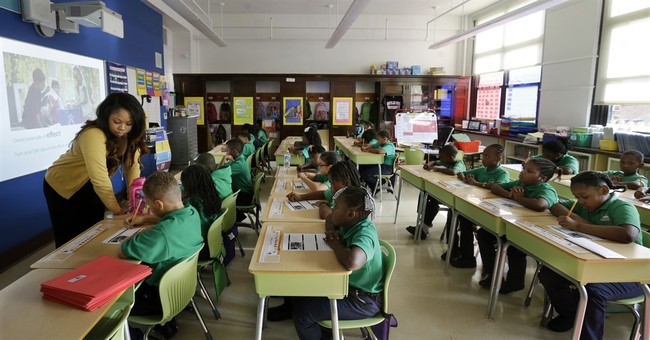 The first week in May is National Charter Schools Week, a time to celebrate the advancements made in the charter school movement over the past 25 years. Because of the nation’s hundreds of new and developing charter schools, thousands of parents and their children now have the opportunity to enroll in a school that better meets children’s specific education needs.

Currently, there are 2.9 million students attending one of over 6,800 public charter schools across 42 states and Washington, DC.

The majority of public charters serve students in some of the United States’ most underprivileged areas. Fifty-six percent of students who qualify for the federal free and reduced-price lunch program are now enrolled in a charter school, and a study published by Education Next revealed the long-term availability of education choice increased college enrollment for African Americans by 24 percent. Additionally, a recently published study in the Journal of Policy Analysis and Management found, “Attending a charter high school is associated with higher levels of educational attainment.”

Charter schools don’t just help those living in impoverished communities; they are also especially beneficial for children dealing with any number of education-related problems, including those with learning disabilities and those students who only excel with specialized education plans. According to a report by The Boston Globe, a study published in 2013 by the Massachusetts Institute of Technology confirmed what many charter school parents already know: “[T]hose most in need of educational improvement tended to benefit the most from charter schools.”

In addition to the direct positive effects on learning that have resulted from the creation of school choice programs,

But even with widespread support for school choice programs, one million students are still waiting for their chance to escape a failing school because of the lack of school choice options in the United States.

One reason for the lack of public charter school choice programs is state legislatures have been slow or outright hostile to expansion. One of the excuses used is public charters drain resources from already strapped traditional public school systems. But according to Education Next, this funding “crisis” is phony: “For the past hundred years, with rare and short exceptions and after controlling for inflation, public schools have had both more money and more employees per student in each succeeding year.”

But even if one does consider money following the child to a public charter school a significant problem for entrenched local schools, there ought to be a greater emphasis placed on a more important consideration: the importance of every child’s education. In many major cities, it is not uncommon for a public school to fail to educate a single student so he or she reaches a proficient level in reading, and research shows about three out of every four students heading to college are not prepared and must take remedial courses in one or more subjects.

The goal of education is to ensure every child is taught to read, write, and perform math at a level that allows them to pursue the career path they desire. Since educational achievement is the ultimate goal of education-related government funding, taxpayers’ money should follow the child to a school that actually educates children at a high level. It is inhumane to force students to remain in a school that is failing to educate its students adequately when there are 25 years of proof showing education choice works.