What Will He Say Next? 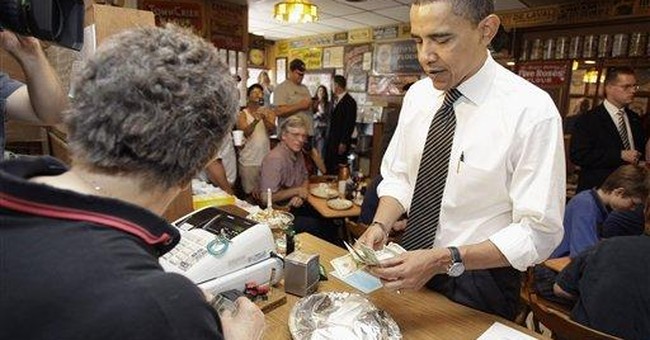 With Obama’s lead in the polls disappearing, a steady stream of doubt is now being poured over Obama’s nervous and inverted campaign. The great orator appears ready to crack. Soon, Obama could be flip-flopping so swiftly that the infamous 90 seconds required to break someone through waterboarding will seem like eternity. If swearing to be a born-again conservative would make him president, Obama would find a way to deliver the announcement and still pacify his delusional and government-dependent audience.

It is nauseating to watch Obama flipping and flopping on the campaign trail as he frantically tries to tell mentally stable Americans what he hopes they want to hear. Standing before the cameras like a POW paraded for propaganda, Obama encrypts his moderate rhetoric with socialist messages to communicate courage and hope to his ideological comrades. He has not completely broken yet, but as panic and confusion gradually overtake the great orator’s senses, we might expect to see his cult stage protests about Obama’s inhumane campaign treatment. Clearly, campaigning is extracting bogus information from the Democrat’s presumptive candidate.

At the current pace, August may well end with Obama swearing that he advocates -- on a limited basis -- small government and self-reliance. He might even say that although he has opposed the war in Iraq from the beginning, he has always been open to supporting certain parts of it in order to win the election. It is not difficult to imagine that with a few more flips, Obama might flop to the right of McCain – threatening to pose as the more conservative candidate.

Fortunately, responsible Americans are beginning to recognize and reject Obama’s contrived responses. Despite Barack’s best efforts to repackage his far-left message, his lyrics still reek of their socialist stench.

In fact, his encrypted messages are becoming easier to decode because they all have a similar translation: “I’ll say anything to get elected.”

For instance, last Friday, Obama said that he supports limited offshore drilling but only if it is part of a broader deal. In plain English that simply means, “I will only appear to support offshore drilling and hope my clever wording will get me elected.”

When Obama originally discussed the opportunity to face McCain in town hall debates, Obama said, "If John McCain wants to meet me anywhere, anytime to have a debate about our respective polices... that is a conversation I am happy to have." In plain English that means, “If I sound confident and tough right now, I can come up with an excuse not to meet McCain later. I have no substance. I hope my empty rhetoric will get me elected.”

In trying to mitigate the racial discomfort he caused by saying, “So what they are going to do is make you scared of me. You know he's not patriotic enough. He's got a funny name. You know, he doesn't look like those other presidents on the dollar bills,” the great orator explained, "In no way do I think John McCain's campaign was racist.” In plain English Obama means, “I hope denying my obviously false and desperate allegation of racism will get me elected.”

On opposing reparations for slavery, Obama says he has remained consistent: "I fear that reparations would be an excuse for some [white people] to say, 'We've paid our debt,' and to avoid the much harder work.” In plain English Obama means, “Why settle for a little cash? I hope to ride white guilt to the White House and beyond!”

Obama chose not to flip or flop concerning the negative publicity stirred up by rapper-pal Ludacris. Interpretation of the silence: “My staff both complimented and admonished Ludacris. I hope my lack of guts to take a stand personally on what is moral and just will not hurt my chances of getting elected.”

Perhaps Obama’s flag pin problem captures the emptiness of all Obama’s words the best: "I decided I won't wear that pin on my chest. Instead, I'm going to try to tell the American people what I believe will make this country great, and hopefully that will be a testament to my patriotism." Now that he is wearing the pin again, Americans seem to have told Obama what they think of his far-Left testament.

By November, Obama may claim to support printing “IN GOD WE TRUST” even bigger on our currency. Of course, what Obama would mean is “IN GOVERNMENT-ORDERED DEPENDENCY.”