The Year of Living Fearfully

Lawrence Meyers
|
Posted: Dec 28, 2020 12:01 AM
Share   Tweet
The opinions expressed by columnists are their own and do not necessarily represent the views of Townhall.com. 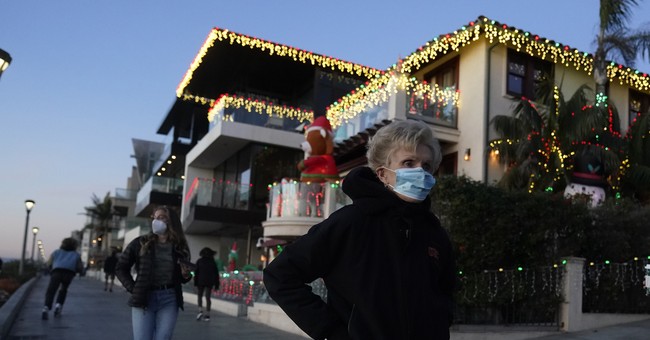 “He has a terrible fear of dying because he has not yet lived…”. -  Franz Kafka

In the past three months, I’ve been in Los Angeles, South Dakota, Wyoming, Colorado Springs, and South Florida. I see the same sorry sight everywhere: healthy young people and children, walking alone along a beachfront drive or in a wide-open outdoor space, wearing a mask. From the brisk wooded trails of Devil’s Tower to the breezy palm-tree lined beaches of Fort Lauderdale, people behave as if there is cyanide in the air.

Ever since March 13, when every grocery store in Los Angeles was wiped clean, right down to condiments and toilet paper, America has been gripped by mass hysteria. Fear has not only undermined rationality and common sense, but it has become the sorrowful guiding principle of a nation built on freedom and courage.

Fear has become celebrated as “caution”, supported by “science” and “experts,” when in fact it has only resulted in months of needless suffering and death. Death of the souls and spirits of millions. Death of livelihoods. Death of careers. Death of families.

Fear kills, and when we look back years from now, we will find fear killed more people than the virus.

Fear can only exist when information is obscured. The more information we have, the more we can determine our own individualized risk, and then adjust our behavior. Instead, facts remain obscured such that risk assessment is impeded. Additionally, should one suggest that mindful risk assessment should be intrinsic to public policy, they are excoriated by the hysterical masses.

There is currently a “surge” in COVID-19 cases, yet simple aggregate case counts are provided only for simple minds. We are never provided context, yet context always matters. Who exactly is testing positive? What demographics? Age? Ethnicity? Location? Co-morbidities? Where might have they been exposed? Most importantly, what percentage of cases are asymptomatic, and in which demographics?

Here are the facts that are being obscured.

553 people under age 24 have died of COVID-19, less than 0.2% of the entire US virus mortality volume. That’s fewer than the 4,000 drivers aged 15 to 20 who die every year in car accidents, yet I see toddlers running around with masks.

94% of deaths are associated with co-morbidities, and the average number of associated causes of death is 3.

That’s the average. In other words, those who are dying of COVID-19 are dying partially as a result of a lot of other things as well. The most common comorbidities besides age are having the flu or pneumonia, respiratory failure, adult respiratory distress syndrome, high blood pressure, heart disease, and diabetes. Even obesity is listed as a co-morbidity in less than 5% of deaths.

And the CDC now estimates that 40% may be asymptomatic. Forty percent!

The CDC clearly states that only infected or possibly-infected individuals and healthcare workers should wear PPE.

And yet, on my flight into Florida, a seemingly healthy young woman in the row in front of me -- wearing gloves, a mask, and goggles -- sprayed and wiped down her entire seat and covered the seat from top to bottom in medical exam table paper. She even used a rubber band to keep the paper in place by strapping it around the headrest.

Not 20 minutes earlier, as I stood in line at a Starbucks at LAX, another young woman who co-owned a chain of substance abuse treatment centers in both Florida and Los Angeles told me that every one of their centers had been at capacity for months. Alcohol has apparently been the primary vehicle for those experiencing the despair of being locked up and unemployed.

The fear isn’t merely perpetuated by the media and by our fellow citizens. Fear controls the seats of power of our governments. Remember that elected officials are just regular people who have been handed power. Most have no special knowledge of anything, and certainly know nothing about epidemiology. The only thing they care about is maintaining power. Neither they nor the “experts” they rely on want to be blamed for anything, so they choose the route that appears safest and kick the can of collateral damage down the road.

That’s why these politicians don’t actually believe what they tell us, so they ignore the rules they’ve set for everyone else. They don’t fear the virus but expect the rest of us to live in terror. They still draw their paychecks and go to their fancy restaurants while everyone else can only weep in despair at the paltry $600 the federal government deigns to spend on them.

Think about this. Instead of hope and faith driving people to cheer on treatments, the desire to live in fear drives the rejection of the same.

The only way out is to find the facts and take control of our own lives. Demand common-sense policies. Resist. Rebel. Don’t just do it for yourself. Do it for the millions of hourly workers who need their jobs back. And then recall or vote out those who inflict this nightmare upon us.