Lawrence Meyers
|
Posted: Jan 26, 2016 12:01 AM
Share   Tweet
The opinions expressed by columnists are their own and do not necessarily represent the views of Townhall.com. 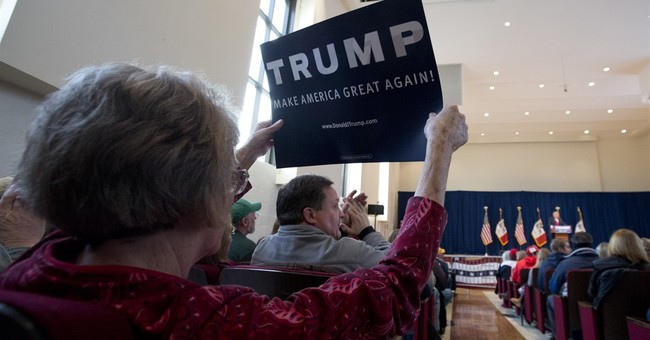 For months, pundits have been trying to suss out Donald Trump.   Is he a Liberal? A RINO? A Conservative?  Why did he give to this Leftist group?  Why did he say this?  How could he say that?  He’s Hitler.  He’s speaking what we think. What are his views on abortion, on the economy, on ISIS?

Everybody, and I mean everybody, is so used at trying to pigeonhole political candidates that they are missing what is right in front of them.  Donald Trump can be explained in two simple words:

Donald Trump is, and always has been, about himself.  His only goal is self-promotion.  He epitomizes the maxim, “there is no such thing as bad publicity.”  What he says or does in any given moment depends on one thing, and one thing only: does it raise his profile?

Donald Trump is not a con artist.   Donald Trump is a salesman, and he is one of the greatest living salesmen.  He is selling the American people a political enema, in a manner similar to the less-talented Ross Perot – who still picked up 20% of the popular vote in two elections.

Trump knows that nobody actually trusts political candidates.  Nobody is the next Ronald Reagan.  Americans will always have misgivings regardless of who their candidate is.  Trump knows that America is fed up with politics as usual, and that we are sick of carefully prepared remarks and debate zingers.  We want authenticity, and Trump is selling his authenticity.

So Trump takes potshots, to shake up politics.  It turns the game on its head.  It forces candidates to either look too stuffy and calculated to respond, or take off the gloves and reveal themselves for being who they are.  Nobody is as quick on his feet as Trump is, and Trump will always look good because he’s using a classic Alinsky tactic: make fun of your opponent.

Trump is selling a maverick approach to politics, in a way that “maverick” McCain could only pretend to.  Yet when the moment requires, he can come off with deadly sincerity.  His chastising of Cruz’s “New York values” blunder was played with aplomb.

Trump’s sales tactics can be analyzed psychologically.  Some have said he gives voice to America’s id, that he is just saying what we are all thinking.  I prefer psychoanalytical pioneer Carl Jung’s description of the shadow, rather than Freud’s id – the unacceptable thoughts and feelings we bury in our unconscious and are denied expression.   By giving voice to our collective shadow, our unconscious says to us, “Thank God he said that.  Now I’m not a bad person.”  Now, we suddenly identify with Trump.  He’s brought us to his side because he can say what we cannot.

Voters who think they can figure out what he stands for are in for a surprise.  Trump doesn't even know what he stands for, so voters don't stand a chance of figuring him out.  Trump stands for whatever garners him publicity, doesn’t waste his time, and is beneficial to his economic empire.

“Abortion?  Who cares?  It’s been decided, there will never be a Constitutional Amendment to change it, and the President has no part in the Amendment process anyway.  Don’t waste my time.”  This may sound like he’s Liberal, but the truth is that he literally doesn’t care.

“$15 minimum wage? I’d fire anybody in my hotels who makes that demand, because I can find workers who will work for less.  Forget it.”  This may sound like he’s a Conservative, but the truth is that he’s being a businessman.

“Terrorist attacked an Israeli resort?  The Israelis are our friends.  We’ll help any way we can, including bombing the crap out of any terrorist base we find.”  This may sound like he’s Conservative, but the truth is that de-stabilization of our allies is bad for the world economy, which is bad for Trump’s businesses.

So what kind of President would Trump be?  Could Americans count on anything, or will he be a shape-shifter that nobody can pin down?  My sense is that Trump will support policies designed to get the 94 million unemployed citizens back to work, and that he will be strong – if perhaps diplomatically clumsy – on national defense and foreign policy.

Beyond that, if it isn’t about Donald Trump, forget it.