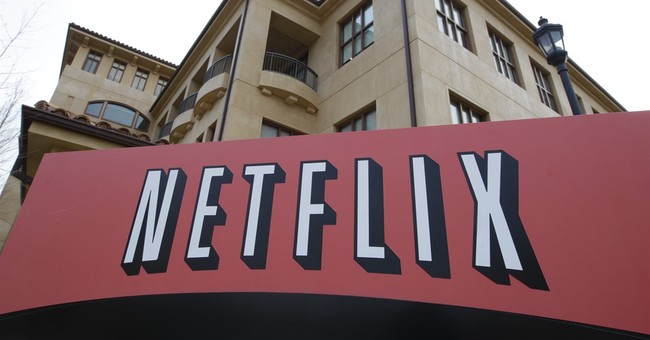 Much as we all enjoy Netflix’s programming and service, and much as we’d like it to supplant Hollywood’s liberal-heavy content, the bad news is that Netflix is not going to survive in the long run. If you hold the stock, you should sell now while you have the chance. You probably have a better chance making money if you short the stock.

Netflix is barely profitable and trades at 338 times its profit, far above what any reasonable investor should pay for even the best companies. Netflix is burning half a billion dollars of cash every year. Hollywood just milks it for license fees so that Netflix is allowed to stream their content. Netflix is trying to move away from that model by becoming its own studio. Yet that approach is extremely expensive and depends on fickle consumer taste to keep subscribers – subscribers who are not being added at the rate they once were in the US.

Both Netflix and its investors were pinning long-term hopes on international expansion. Yet that’s a terrible strategy. Most other cultures are not like ours. They don’t stay home to watch Netflix. They go out to be with friends. There’s a reason there are ten cafés on every European street.

The big hope for Netflix was China. Those hopes have been dashed, and I’m shocked that the stock hasn’t cratered, given the horrible news coming out of the world’s second largest economy.

Another individual who is shocked is Ovadia Ovi Levy, a private equity fund manager in Naples, Florida. He is short Netflix stock, and believe the recent developments in China undermine an already illusory premise that China would somehow be a juggernaut for Netflix.

“China has its own film industry and it does extremely well. It is mostly a cultural divide. Chinese like to see Chinese faces, Chinese characters, Chinese values, and Chinese stories. Except for movies where things get blown up, American films mean nothing to the Chinese. Nobody there cares about the new Woody Allen movie, or about the next episode of Fargo,” Levy says.

“Plus every single movie goes through the censors. That means if Netflix wanted to stream movies that are a few years old, the censors will demand cuts. No movie studio is going to go back and make those cuts. The films were finished long ago, they won’t spend more money just to please Chinese censors. Therefore, Netflix wouldn’t even have much content to stream.”

But things just got worse. Netflix made a deal with Disney years ago to be the exclusive streaming distributor for Disney content. They were probably hoping Disney would do the same deal in China, but Disney shocked them by partnering with Alibaba instead.

“Alibaba has a cozy relationship with the Chinese government. It already had a partnership with two state-owned TV stations to stream content. Now it has partnered with Disney to sell a dedicated set-top box for $125 that will only stream Disney content, while also giving viewers a chance to purchase other Disney ancillary products.”

This leaves Netflix entirely out in the cold. It will have limited content to stream, it won’t be able to afford what little it may be able to stream, and it has to convince the government to let it stream at all.

“You have to be crazy to own Netflix stock,” Levy says. “It was a first-mover, but now its industry is a commodity as more and more services are coming online.” With China no longer a viable way of generating revenue, and with international expansion still losing money, Levy says Netflix’s $50 billion valuation is “insanity on top of absurdity”. He fears many retail investors who don’t understand the complexity of the business will lose a lot of money, and jeopardize their financial well-being.

“If you have profits, get out now. If you are break-even, find another investment. If you have already lost money, get out before you lose more. Netflix is headed for zero.”