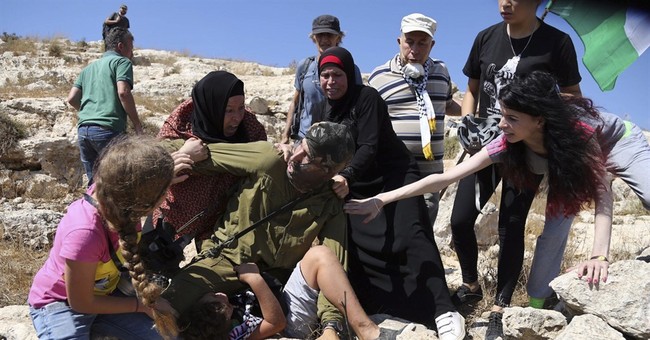 Another week, another Palestinian protest in the West Bank. Arabs, Leftists, and Anarchists try to tear down fences and throw rocks at IDF soldiers. The purpose isn’t just to riot, but to provoke IDF soldiers into action that makes them look bad.

Welcome to “Pallywood” – the term given to Palestinians who deliberately spark these situations to spread anti-Israeli propaganda. They are very good at it, and it’s time the world knows how they operate.

The video making the rounds, picked up by irresponsible and anti-Semitic media outlets around the world, appears to show a mean IDF soldier chasing down a small child with a cast on his arm and manhandling him.

Of course, the video is edited. None of it shows the riots. Nor does the media ever ask the questions it should:

How is it that the media happened to start rolling cameras at that exact moment when the soldier was chasing the boy? Why is a small child, with a cast on his arm, walking around steep and rocky terrain – by himself – during the riots? Why does the cast on his arm look so fresh and new? Why isn’t there writing on it, or signatures, like any other boy would have? Why is the sling not that provided in customary medical fashion, but a keffiyeh – the headscarf worn by terrorists and a symbol of Palestinian “resistance”?

What about that little girl in the pink shirt? Look closely at her in the video (which, again, I caution is edited, and does not show the entire incident).

It is the same girl in this video.

Sources tell me this is Ahed Al Tamimi, nicknamed “Shirley Temper”, by those aware of her leading roles in Palestinian propaganda videos. Pay close attention how she waits to begin her performance in the second video until the car with the camera is parked and ready. All we’re missing is the director to yell, “action!”

The Daily Mail reports that, “Her father, Bassem al-Tamimi, was convicted by an Israeli military court in 2011 for 'sending people to throw stones, and holding a march without a permit'…He has been jailed eight times, while his wife has been detained five times. Other family members, including their son Waed, has also been arrested.” Bassem is allegedly the organizer of the weekly protests, according to the Mail and IsraelToday.

As for the original video, for those who don’t understand Hebrew, the IDF soldier is calling for help from his comrades. He knows he cannot engage any of these women who are attacking him for fear of providing the media with footage that can be used against him. Indeed, the IDF has strict rules of engagement. For example, even if they have already been attacked by terrorists throwing Molotov cocktails, soldiers cannot fire on them unless they are actually holding a lit cocktail in their hand…and even then, can only shoot them in the leg.

What the media also ignores is that if family members intervened with a soldier in any other Arab country, and more than a few others, they would be severely beaten on the scene at best, and shot dead at worst. This includes Gaza and the West Bank, where the Palestinian Authority would do exactly the same thing.

Yet there are the images of the big, bad, evil, mean, Apartheid Israeli soldier beating up on a poor defenseless Palestinian boy with a cast on his arm. But water carriers and/or useful idiots and/or anti-Semitic media outlets like CNN, The NY Daily News, and the original Associated Press release just run with what they have.

It is essential that Americans, Jews, and the rest of the world call out terrorism and propaganda when it occurs. I stand with Israel. Do you?