Joe Biden Steps Up Gun Targeting Ahead of Debate

Lawrence Keane
|
Posted: Jul 30, 2019 12:01 AM
Share   Tweet
The opinions expressed by columnists are their own and do not necessarily represent the views of Townhall.com. 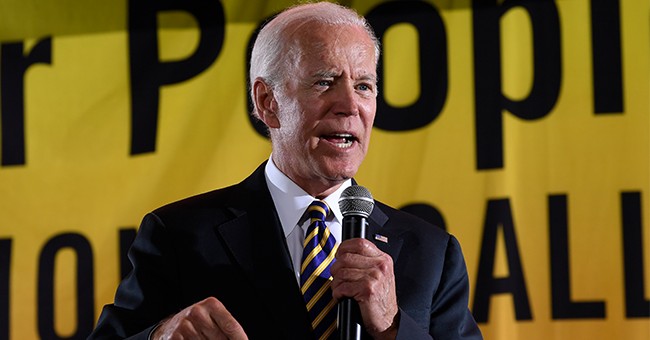 Joe Biden’s been in Washington D.C. for nearly 50 years and he’s finally got a plan.

Too bad, it’s not much of one.

Biden’s plan to fight crime squarely places his latest target on the NRA, a civil rights organization dedicated to protecting Second Amendment rights. His campaign website features an entire section a key component to his “Plan for Strengthening America’s Commitment to Justice.”

“In the months ahead, Biden will also detail his plan to tackle the public health epidemic of gun violence in America, starting with universal background checks and bans on assault weapons and high-capacity magazines.”

First, a quick primer. Biden struck out at gun manufacturers as “the enemy” in the last debate. He didn’t call American gun makers, companies that produce firearms for law-abiding citizens, law enforcement and our military as opponents, adversaries, or foes. His language was very clear.

In fact, not a single candidate on the stage disagreed or denounced the statement then, or since. Their silence is agreement. They don’t think Biden was off the mark.

Biden travels the well-worn anti-gun trail by lumping together two groups that actually have nothing in common. He equates the NRA – its members who are law-abiding Americans – with criminals. He purposefully mislabels those who oppose his attack on American rights with those who have no respect for authority, rule of law, property or even life.

He further conflates issues by categorizing so-called gun violence with a health epidemic. Joe’s attempting to rebrand crime as a public health issue. This only ensures the problem of criminals preying on our society’s most vulnerable will never be solved. There is no pill that cures crime. It requires elected officials to have the fortitude to confront criminal activity and give law enforcement the tools to fight it. It also means respect the rights of lawful gun owners who resist becoming victims to crime.

Biden is not a newcomer to smoke-screening issues. He’s been in politics since 1970, and in Washington, D.C., for all but three of those years. Instead of tackling crime head on, he clouds the issue by wrapping it in hyper-charged but meaningless terms. He proposes “universal” background checks and bans on so-called “assault” rifles and the “high-capacity” magazines that go with them.

Biden refuses to face the reality that criminals, by definition, are criminal and flout the law. This punishes the law-abiding, but coddles the criminal. “Universal” background checks sounds nice, if only those pesky criminals would bother coming in for a background check when they steal guns, illicitly trade and sell them on the black market or hand them off to another criminal.

Getting rid of “assault” weapons sounds nice, except civilians don’t own them with rare exception. Civilians do own semiautomatic modern sporting rifles that fire one round with each pull of the trigger. Biden’s following the Josh Sugarmann playbook of playing on ignorance of automatic military firearms and semiautomatic rifles because they have a similar appearance. It helps when PolitiFact covers for Biden and says his ban plan is all but a ban, since it’s just “assault” rifles.

Of course, the 16 million lawful private owners wouldn’t be nearly as scary if Biden could just ban those scary magazines, which the New York attorney general recently called “rapid fire bullet delivery systems." Biden helped ban both rifles and magazines before, but it had no effect on reducing crime.

Biden’s not serious about fighting crime. He’s only serious about using the firearms industry and gun owners as a punching bag throughout the campaign season. If he were serious, he’d support NSSF’s effort to pass the Federal Firearms Licensee Protection Act, that would strengthen penalties for burglaries and robberies of firearms retailers. Criminals conducting “smash-and-grabs” by plowing through store doors and walls and walking out with armfuls of guns are the threat to our communities we should confront together. It’s part of the industry’s Operation Secure Store, to prevent these thefts from occurring.