Laura Hollis
|
Posted: Aug 27, 2020 12:01 AM
Share   Tweet
The opinions expressed by columnists are their own and do not necessarily represent the views of Townhall.com. 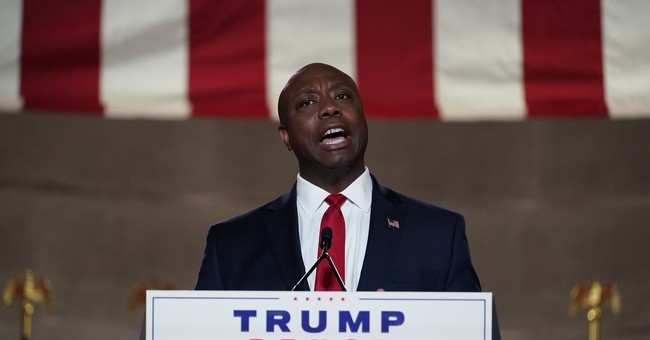 Both during their conventions and outside of them, the Democratic and Republican Parties have shown the American public two visions of our country. And the contrast could not be starker. In order to analyze it, it's essential to separate facts from spin -- particularly media spin, which has been divorced from reality for decades when it comes to Republican politicians and policies but has plumbed new depths of desperation and falsehood since Donald Trump was elected president in 2016.

We're told by Democrats that the United States is an irredeemably racist country, and that "systemic racism" keeps Blacks and other Americans of color from achieving what they otherwise could. But Democrats don't explain Americans like Oprah Winfrey, former President Barack Obama, Sen. Kamala Harris, Colin Kaepernick, Kobe Bryant, Rep. Maxine Waters, LeBron James, Sydney Poitier and countless other Black activists, actors, athletes, teachers, firefighters, politicians, police officers and business owners who have, despite facing discrimination, uphill battles and more difficult odds, achieved incredible success. Either the "system" that was allegedly set up to keep those individuals from succeeding does a remarkably lousy job of it or there's more to the story.

We're told that it's Democrats who truly care for women, minorities, immigrants and children, but it's the left that insults first lady Melania Trump for her status as an immigrant and her accent. It's the left that calls Black and Hispanic conservatives the worst racial slurs. It's the left that mocks and pooh-poohs the accounts of immigrants like Maximo Alvarez who escaped communist Cuba. And it was the left that misjudged pro-life teenager Nick Sandmann, called him a racist with a "punchable face" and sicced the social media mobs on him.

We're told that President Donald Trump and Republicans are fascists, but it's Democratic governors, mayors and prosecutors who have shut down small businesses; who have sent coronavirus patients to be housed among the most vulnerable populations in nursing homes and long-term care facilities; who have released convicted felons from prison but ordered the arrest of religious observers, moms at parks and surfers; and who have allowed rioters and looters to escape scot-free but charged homeowners for defending their home.

We're told that Republicans and conservatives are racists, but it's progressive whites who are screaming racial epithets at minority police and other first responders.

We're told that it's Democrats who can best lead our cities. But Democratic-led cities like New York, Chicago, Seattle, Portland, Atlanta and even tiny Kenosha, Wisconsin, have seen unprecedented rioting, looting, arson, destruction, vandalism, theft and physical violence -- including murder -- at the hands of criminal mobs of rioters, while the state and local political "leadership" does virtually nothing. Democratic mayors tell the police to stand down. Democratic governors hesitate to call in the National Guard to protect people and property. And Democratic presidential nominee Joe Biden barely addresses the violence.

The riots and destruction that Democratic political leaders have allowed to explode and spread in cities across the country make clear that a lot of people in America don't matter. Homeowners don't matter, as they can be screamed at and threatened all hours of the day and night. Business owners -- even and especially minority business owners in the cities ravaged by riots -- don't matter, as their buildings and property are destroyed with impunity. Law-abiding and peace-loving citizens don't matter, as riotous mobs are permitted to burn, vandalize and destroy property; assault people; and even kill people. Law enforcement doesn't matter, as Democratic activists and politicians call for defunding and even abolishing the police.

Meanwhile, what do we see at the Republican convention?

Minorities such as Sen. Tim Scott and football great Herschel Walker, women such as former U.S. Ambassador and South Carolina Gov. Nikki Haley, and immigrants such as Maximo Alvarez speaking up for the unparalleled opportunities that the United States offers because of liberty and individual rights, notwithstanding our failings. Alvarez, who escaped communist Cuba, warns us about going down the primrose path to collectivism. Activists like Abby Johnson speaks up for the lives of unborn children.

Republicans are pitching optimism, opportunity and the limitless possibilities of the individual in America, regardless of background, religion, race, ethnicity or the obstacles that have existed and continue to exist.

Democrats are pitching anger, hatred, victimhood, resentment, class and racial warfare, and self-loathing. If there is any hope, it lies solely in the hands of an ever-larger government -- led, it must be noted, by the same people who have presided over the devastation and catastrophic failures noted above.

Democratic stalwarts in American history like former Presidents Franklin D. Roosevelt, Harry Truman and John F. Kennedy must be rolling over in their graves to see what the Democratic Party has reduced itself to. This is what the Democratic National Committee expects Americans to support? This is what it thinks people -- regardless of party affiliation -- want more of?

The election is still 60-plus days away, and there is always an element of unpredictability and the prospect of an unexpected surprise. But at this juncture, it's hard to see how a majority of the American electorate is going to vote for what the Democrats are selling as their vision of America. In truth, it's not even a "vision." It's more like a nightmarish hallucination. Except that it's all too real.