Why Would Anyone Vote for a Democrat for President?

Laura Hollis
|
Posted: Dec 12, 2019 12:01 AM
Share   Tweet
The opinions expressed by columnists are their own and do not necessarily represent the views of Townhall.com. 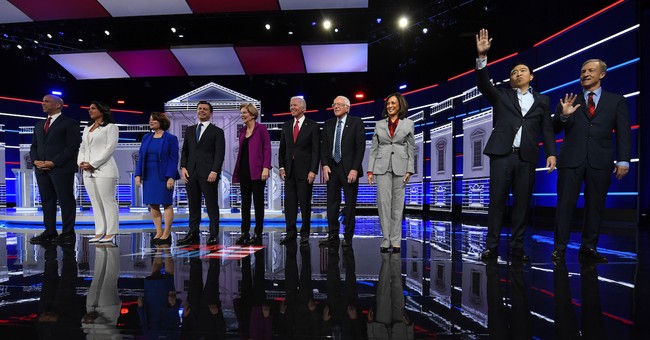 It's a serious question. Other than hating Donald Trump, why would anyone vote for any of the Democratic candidates for president of the United States? They've given us precious few reasons to support them and plenty of reasons to conclude that they shouldn't be given any political power -- much less the presidency.

Here are just a few:

1. Their policy proposals would be fiscal and social disasters. The "Medicare for All" espoused by Sens. Bernie Sanders and Elizabeth Warren is projected to cost anywhere from $30 to $50 trillion. That's already an insane amount of money. What's worse is that we have an abysmal record projecting the actual costs of social programs. When Medicare was passed in 1965, it was projected to cost $12 billion by 1990; the actual cost in 1990 was $90 billion. In 2018, the federal government spent $582 billion on Medicare. Spending on Medicaid in its first year (also 1965) was projected at $238 million; the actual cost was over $1 billion. Spending on Medicaid in fiscal year 2017 was $557 billion. Our ability to prognosticate hasn't improved in the past 50 years; projections for the 2009 Affordable Care Act were appallingly inaccurate. So you can probably safely double or even triple that single-payer health care estimate. The system would be bankrupt in short order -- and would take the quality of health care down with it.

2. Democrats are often accused of supporting regulations that cripple businesses. But this crop of candidates goes even further, promising to destroy entire industries. Sen. Elizabeth Warren -- who has never made a payroll in her life -- blithely announced that she'd make private insurance illegal, shuttering tens of thousands of American companies and putting millions of people out of work.

3. Warren isn't the only Democrat who threatens "like a dockside bully." Consider Sen. Kamala Harris' recent statements that she would "snatch" patents away from companies that won't put in price controls she wants. How many life-saving drugs has Sen. Harris developed? None. How many patents has she applied for and received? None.

4. They favor oppressive government. Michael Bloomberg -- a man who should know better -- has advocated for taxing the poor -- for their own good, of course. Bloomberg also said with a straight face that the communist government of China listens to the public and that President Xi Jinping "is not a dictator." (Tell that to the Hong Kong protesters, the untold numbers of women subjected to forced abortions or the Uighur Muslims in re-education camps.) That tells you plenty about what President Bloomberg would view as being "responsive" to the American people.

5. They are willing to shred the Constitution when it suits their purposes. Examples of this are legion including:

-- They oppose religious liberties -- including conscience protection. Former Rep. Beto O'Rourke argued that churches that do not accept his views on human sexuality, marriage and family should lose their tax-exempt status as charities.

-- Nor are they defenders of other First Amendment protections -- at least for conservatives. When Republicans or Christians bring suits to defend their freedom of speech, Democrats -- even on the Supreme Court -- now call that "weaponizing the First Amendment."

-- They want to abolish the Second Amendment.

-- With their candidate (Hillary Clinton) having lost in 2016, Democrats are all-in to eliminate the Electoral College, which -- like the structure of the U.S. Senate -- was structured to provide a meaningful voice to states with smaller populations. Both Hillary Clinton and Al Gore (in 2000) won the so-called popular vote by getting a large number of votes in California. But California doesn't get to elect the president.

6. They have no respect for the presumption of innocence, the rule of law or the integrity of the legal process. We saw this in the appalling behavior of Democratic senators (Dianne Feinstein, Cory Booker and Kamala Harris) during the confirmation hearings of Associate Supreme Court Justice Brett Kavanaugh. But the abuse of process since Donald Trump entered the presidential race (and won) has been even worse. Having failed with the Robert Mueller investigation on "collusion" with Russia, Democrats are now trying to impeach Trump for a phone conversation he had with the president of Ukraine.

What makes Trump such a successful president? It's a simple point that goes right to the heart of the system of American governance: Trump trusts that most Americans can run their own lives, their families, their businesses, their schools and their communities. In other words, he does not (and did not) see it as his role to walk into the White House and "fundamentally transform" the country.

Democrats, on the other hand -- with almost zero experience starting, growing or operating any enterprise of any size; no experience with meeting the needs of customers, patrons or patients; no experience making payroll -- are certain that they can come in and run a country of 330 million people.

We don't have to speculate about their failures; we need only look at the places they do control to see how successful they've been. Detroit, Baltimore, Chicago, San Francisco, Los Angeles, New Orleans: What do citizens of those cities (and states) enjoy? Corruption. High taxes. Bankrupt governments and underfunded state pensions. Population loss. Gun violence and other crime. Homelessness. Filth and rodent infestation. Streets filled with used hypodermic needles and human feces.

Tell me again. Why would you vote for that?