Slimy Similarities Between Weinstein and the DNC Are No Coincidence

Laura Hollis
|
Posted: Nov 09, 2017 12:01 AM
Share   Tweet
The opinions expressed by columnists are their own and do not necessarily represent the views of Townhall.com. 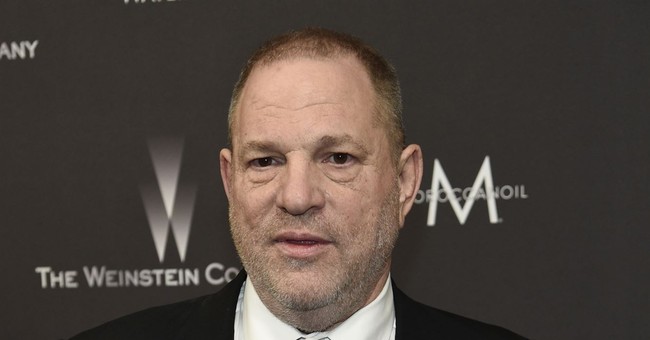 Ronan Farrow is on a roll.

Farrow's investigative reporting on the Harvey Weinstein scandal is putting other so-called journalists to shame. It has already been reported how NBC mysteriously rejected the explosive Weinstein story before it was picked up by New Yorker magazine, and Farrow has tweeted praise for his NBC producer, Rich McHugh, who supported Farrow in the face of tremendous pressure from the higher-ups to kill the story.

But there is more to be learned from the increasingly sordid story about Harvey Weinstein's abuse of power and the concerted efforts of others to protect him.

One startling revelation not noted by Farrow is the strange similarity between Weinstein's tactics to avoid exposure, and those of the Democratic National Committee to sabotage and destroy Donald Trump during and since the presidential election last year.

Farrow's most recent piece in New Yorker magazine -- titled "Harvey Weinstein's Army of Spies" -- chronicles Weinstein's campaign to silence any accusers. According to Farrow, Weinstein paid plenty of media and gossip columnists to smear actresses who might dare tell tales. He also hired "private security agencies" to look for dirt on all potential claimants:

"The explicit goal of the investigations ... was to stop the publication of the abuse allegations against Weinstein that eventually emerged in the New York Times and The New Yorker. Over the course of a year, Weinstein had the agencies 'target,' or collect information on, dozens of individuals, and compile psychological profiles that sometimes focused on their personal or sexual histories. Weinstein monitored the progress of the investigations personally. He also enlisted former employees from his film enterprises to join in the effort, collecting names and placing calls that, according to some sources who received them, felt intimidating."

Among the companies hired was Black Cube, an entity owned and operated by former members of Mossad, the Israeli intelligence agency. Black Cube sent operatives out under false names and identities to call, speak, and/or meet with many of Weinstein's accusers, including Rose McGowan and Annabella Sciorra.

Although Weinstein apparently selected Black Cube, the enterprise received its contract -- and the first $100,000 of a $600,000 fee -- from the law firm of Boies Schiller Flexner. Named partner David Boies has been one of Weinstein's attorneys. If that name sounds familiar, it should; Boies is the famous lawyer who represented Democrat candidate Al Gore in the 2000 presidential election and Bush v. Gore litigation.

As Farrow explains, the beauty of having one's law firm hire the "oppo research" or "intelligence" firm is that investigative attempts to get information about those business relationships get stiff-armed behind claims of attorney-client privilege.

Black Cube claims that its methods are legal and above board, but two of their employees were arrested in Romania last year on charges of -- wait for it -- computer hacking.

Seeing any parallels yet?

The Democratic National Committee accused Donald Trump of "collusion" with the Russians to impermissibly sway the election in his favor. But as we now know, it was the DNC that paid Fusion GPS for opposition research on Donald Trump. Fusion GPS then hired a former British intelligence agent named Christopher Steele. Steele was responsible for generating the now infamous (and largely discredited) "dossier" on Trump, for which he received $168,000.

FBS Fusion was paid by the law firm Perkins Coie. That firm represented former President Obama for years in campaign-related matters and in litigation related to Obama's birth certificate and academic records (which remain unreleased), to the tune of nearly $3 million. And Obama's campaign organization Obama For America has paid Perkins Coie over $900,000 since April of last year.

The DNC, Clinton campaign staff and Perkins Coie partner Marc Elias lied and denied for months that they had anything to do with Fusion GPS. In fact, the Clinton campaign paid Perkins Coie $5.6 million, a big chunk of which was then funneled to Fusion GPS and Steele. The campaign then deceitfully -- and arguably unlawfully -- claimed on its Federal Election Commission reports that the funds paid were for "legal services."

No one associated with the Clinton campaign seems to know who made the decision to hire Fusion GPS. Current DNC chair Tom Perez claims he knew nothing. Former DNC Chair Donna Brazile (much in the headlines these days for her scathing tell-all book about Clinton's 2016 loss) says she was told she "didn't need to know." Hillary Clinton says she didn't know.

So, let's recap the similarities, shall we?

--Attorney who is a reliable footsoldier for the Democratic Party? Check.

--Media in the back pocket, guaranteed to ignore or bury the story? Check.

It is also worth mentioning -- again -- that Harvey Weinstein was one of the biggest fundraisers for the Democratic Party. And that Hillary Clinton was suspiciously silent when the allegations against Weinstein started erupting.

If you think these are all coincidences, I have a Russian dossier to sell you.