The Left Has Dominated Academia for Too Long

Laura Hollis
|
Posted: Apr 27, 2017 12:01 AM
Share   Tweet
The opinions expressed by columnists are their own and do not necessarily represent the views of Townhall.com. 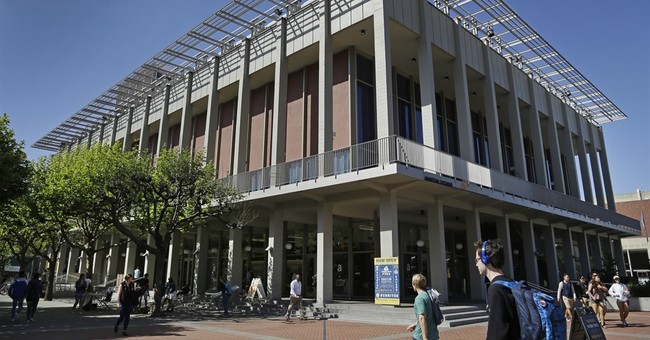 History shows with painful clarity that whenever human beings get too much power, that power ends up corrupting the very values that prompted people to seek it in the first place.

Why? Because human beings are flawed, self-interested, imperfect creatures. No one has complete understanding or unimpeded wisdom, and the failure (or refusal) to recognize one’s limitations leads to oppressive consequences.

This is certainly true in government. Governments with multiple parties, parliamentary systems and free elections tend to promote human flourishing, because power is grounded as much in persuasion as in brute force. Those societal structures (among others) facilitate the development of ideas and encourage competition, therefore mitigating the profoundly human impulse for complete control.

By contrast, governments and cultures that permit only a handful of people to rule inevitably descend into ignorance, brutality and barbarism. Those who start by believing that they deserve power because they are right, eventually come to believe that because they have power, they must be right. Anyone who disagrees becomes the enemy, and enemies must be eliminated.

The same human failings that create oppressive government can corrode other institutions. Higher education has become a painful example, dominated for decades by the political left. We are seeing the same kind of blinkered egotism, divorcement from reality and corruption of principles that one sees in one-party governments or outright dictatorships.

Consider just a few of the legitimate complaints that have been piling up in the past 20 or 30 years. Many of these have their source in well-intentioned left-ish ideas that went seriously awry: the proliferation of majors that hold little to no possibility of meaningful employment; the erosion of academic standards; the encouragement of sexual license and devastating “hookup culture” and “rape culture” issues; the elimination of in loco parentis and creation of a warped quasi-legal state in its place; the de facto criminalization of student and faculty disciplinary matters and denials of due process; the creation of inflammatory and absurdly expansive concepts like “trigger warnings, “safe spaces,” "privilege” and “cultural appropriation.” And then there is exploding tuition that has outpaced inflation and even the costs of medical care.

Most recently, we are seeing attacks on the Constitution, including and especially the First Amendment. Loud and vulgar protests, once dismissed as silly hysteria by pampered snowflakes, have now morphed into frightening violence by bona fide mobs. These are no longer isolated incidents, and they are constantly justified by gross misunderstandings of our constitutional liberties -- taught at our colleges and universities.

A few brave souls like Allison Stanger at Middlebury College, John Ellison at the University of Chicago, and Peter Salovey at Yale have dared to point out that this runs directly counter to the purpose and point of a university education. But these voices are drowned out by people like Ulrich Baer, who wrote recently in The New York Times that some speech needs to be restricted for the public good. “The idea of freedom of speech does not mean a blanket permission to say anything anybody thinks,” Professor Baer intones soberly. “It means balancing the inherent value of a given view with the obligation to ensure that other members of a given community can participate in discourse as fully recognized members of that community.”

This is blatant constitutional ignorance. That it is being espoused by a university professor is an embarrassment. Professor Baer doesn’t say who will decide whether your view has the requisite level of “inherent value,” but it certainly won’t be you. It will, most likely, be whoever doesn’t like what you’re saying.

It is not that liberals and progressives have contributed nothing to human betterment. To the contrary, theirs is an impressive track record on issues like discrimination, labor laws and environmental concerns, to name a few. But the seeds of the present conflict were sown in those earlier successes. Just because someone was right about issue X 20 years ago does not mean they are right about issue Y today. But who’s going to tell the emperor that he has no clothes?

Academia is not called the “ivory tower” for no reason. Many academics work in blissful isolation. Unlike businesses, they do not have to persuade the consuming public of the merits of their views. They themselves do not suffer the consequences of espousing false or damaging ideas. They are rarely called out for promoting failed ideologies. (Teaching Marxism as history is one thing; teaching it as a theory that just needs to be successfully implemented is another.)

Unlike the American system of government, where political viewpoints do battle almost daily for public support, academic views suffer precious little comparable challenge; the predominance of left-wing politics in academe means that faculty tend to operate in a climate where much of what they believe is reinforced by the shared views of those around them.

This is cause enough for concern. When coupled with calls to shut down debate, foreclose speech or deny colleagues and students due process, it is a crisis waiting to happen.