Laura Hollis
|
Posted: Apr 13, 2017 12:01 AM
Share   Tweet
The opinions expressed by columnists are their own and do not necessarily represent the views of Townhall.com. 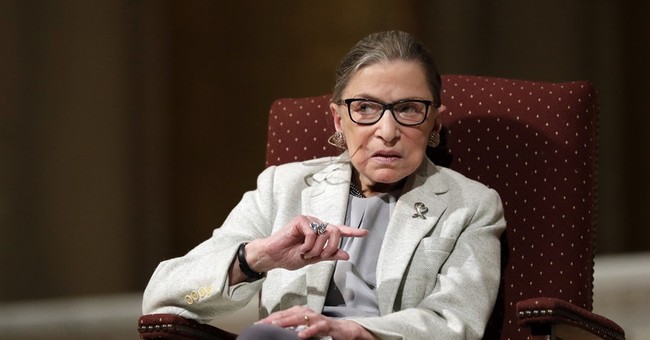 Earlier this week, Supreme Court Justice Ruth Bader Ginsburg and now-deceased Justice Antonin Scalia (posthumously) received the seventh annual Award for Civility in Public Life from Allegheny College. Every year since 2011, Allegheny College has recognized two individuals whose conduct -- often toward each other -- displays the kind of respect and courtesy that should be a hallmark of political discourse and public life in a civilized society.

The decision to give the award to Ginsburg and Scalia was inspired. The long friendship between the two -- often referred to as the Supreme Court's "oddest couple" -- was well-known and often marveled at. Despite their profound political differences and conflicting interpretations of the Constitution, the two justices held great admiration for each other's intellect and analytical skills, as well as a shared love of travel, fine cuisine and opera. They (and their spouses) socialized together frequently.

Their quotes about each other reveal much about their interpersonal dynamic. When questioned about his friendship with Ginsburg, Scalia once said, "If you can't disagree ardently with your colleagues about some issues of law and yet personally still be friends, get another job, for Pete's sake." For her part, Ginsburg observed that Scalia's written opinions forced her to make her own arguments that much sharper. And she admitted that she often struggled to keep from laughing when Scalia issued one of his infamous zingers from the bench during oral argument.

Thus it was perhaps providential that the award ceremony took place on the very day Neil Gorsuch was sworn in as the 113th Supreme Court justice, capping a deeply contentious 14 months since Scalia's death, and unprecedented rancor in the U.S. Senate over the process of confirming his replacement. In her acceptance remarks at Allegheny, Justice Ginsburg reflected on the traditions of civility at the Supreme Court, and expressed the hope that members of Congress and "others of goodwill (would) lead in restoring harmonious work ways."

From this vantage point, that looks unlikely. It isn't merely the confirmation process for Supreme Court justices that has become bitter and vicious; across the country, political disagreements between people generally have become deeper and more acrimonious, prompting violent protests on college campuses, nonstop tirades on social and other media, calls to end friendships and even ties cut with family members.

Many decry the present political climate, but I hear few suggestions about how to change things. Perhaps no one's completely clear on how we got here.

The president of the United States is supposed to enforce the laws. The Supreme Court is supposed to interpret them. It is Congress alone that has the authority to write federal laws -- and even then, only in those areas delegated to it by Article I of the U.S. Constitution.

Our system of governance was originally designed so that the bulk of the laws that affect our daily lives would be written at the state and local level. The abandonment of this principle is behind much of the hostility today. It's easy to participate in the lawmaking functions of your school board or city council. Our state representatives and senators are answerable to their constituents in a much more immediate fashion than is Congress.

But even the 535 members of Congress have to run for re-election every two or six years. If Congress is writing laws that their constituents don't like, they'll hear about it and respond, or pay the price at the ballot box. And both state legislatures and Congress typically need to work together to pass legislation.

But that requires a type of collaboration and persuasion that's fallen out of favor. In control of both houses of Congress until 2010, Democrats rammed through the Affordable Care Act using a combination of hubris (Jonathan Gruber), ignorance (Nancy Pelosi) and deceit (President Obama himself). The Act received not one Republican vote. And at the U.S. Supreme Court, it takes only five individuals legislating from the bench to create "laws" like Roe v. Wade, which would never have made it through Congress, much less 50 state legislatures.

Collaborative legislation is messy and slow, and judicial restraint is frustrating to those who want results now. But we are seeing the results of the alternative, and they are destructive.

Return to a more civil political discourse will require, amongst other things, a shift of political power away from the federal government, and back to the states, closer to the people, where it belongs.