Larry Provost
|
Posted: Sep 11, 2018 12:01 AM
Share   Tweet
The opinions expressed by columnists are their own and do not necessarily represent the views of Townhall.com. 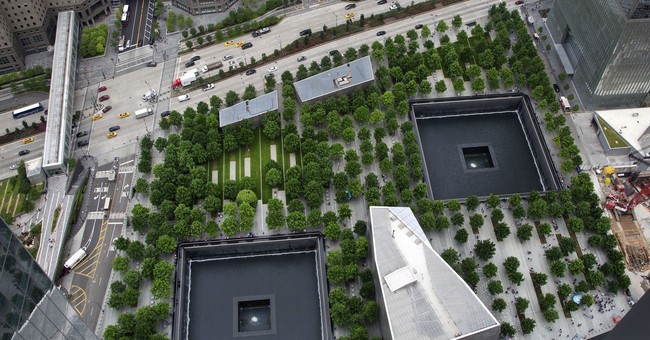 One of the best artistic illustrations that came after the September 11, 2001 terrorist attacks was that of an American soldier grabbing a United States flag from a New York City firefighter who was caught in the ruins of the World Trade Center. The soldier said to the firefighter, “I’ll take it from here.” In the reality that is both death and life, stemming from September 11, there are numerous stories that illustrate that principle. Two days ago, yet another story affirming life and the forever bond that exists between the New York City uniformed services and the American military took place.

First a bit of background.

In the immediate aftermath of the September 11 attacks, the New York City Uniformed Services responded to the attack to include the Fire Department of the City of New York (FDNY). One of the first to respond to the attack was the 10/10 Firehouse across the street from the World Trade Center known as Ten House. Thereafter, many New York City and State uniformed services responded.

The young man stayed in military service, deployed numerous times, became a commissioned officer and married a lovely young lady who fully supports him and never raises a finger about the amount of time he has to spend away from home.

The officer recently received a major promotion in military service and decided to have his promotion ceremony at the Horse Soldier Monument at the World Trade Center. However, major rains in New York threatened to disrupt the occasion and the ceremony moved indoors to Ten House and perhaps, if it were possible, an even more appropriate venue.

In attendance at the ceremony were those wearing uniforms and civilians, Army and Navy members as well as firefighters 10/10 that graciously hosted the ceremony. One of the military members set down his cover, not realizing that the locker he rested his cover on was the locker for those on duty the morning of September 11. The service member looked up and saw the chalkboard still had written on it “9/11/01” with the names of those who had been on call that day. The amount of dust on his cover when he took it off the locker attests that the chalkboard, and probably the locker, were the only parts of the firehouse that had not been cleaned since September 11, 2001.

The promotion ceremony was short but powerful. Officers and enlisted, with countless combat deployments of their own, spoke of the righteousness of our struggle and our way of life. Firefighters who had fought numerous fires listened intently. For a few brief moments, at the site of the worst terrorist attack that has ever affected our nation as well as others (September 11 was also the worst terrorist attack in British history), there was unity in patriotism, a sense of higher purpose and hope for the future.

Many have come and gone since the September 11 attacks. No one is at Ten House anymore who was there 17 years ago. Many military members are retired, discharged, or fought their last battle in the Middle East or Central Asia. Some are now sick or have died of World Trade Center related illness, along with their FDNY, PAPD, and NYPD brothers and sisters. But they are never forgotten and new members are now carrying on their struggle.

The officer, who was a young man on September 11, 2001, is still serving, still responding, and always ready. Seventeen years ago he was little more than a teenager; a young man who already believed deeply in America. Now he is a leader and teacher for those that follow him and will one day have to respond to an attack or lead missions, just as he has done. By land, sea, or air, from the deserts of Iraq, the mountains of Afghanistan, and the rubble of the World Trade Center, he continues to serve; he continues the mission; he continues to carry the flag.