Time for Manchin to Man Up

Larry O'Connor
|
Posted: Nov 13, 2020 11:55 AM
Share   Tweet
The opinions expressed by columnists are their own and do not necessarily represent the views of Townhall.com. 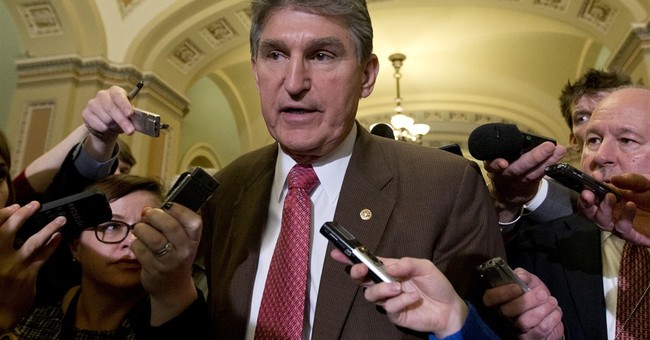 Democrat Joe Manchin has been running against his own party since his first campaign for Senate in 2010. That year, the year of the Tea Party and the historic Republican victories in the House of Representatives, Manchin was the only real victory for Democrats.

The former governor of West Virginia secured his victory with a television ad (remember television) where he loaded a rifle, proclaimed his fealty to the National Rifle Association, the Second Amendment, pledged to "take on" the Obama Administration, repeal the "bad parts of Obamacare" and then literally shot a bullet through a copy of the Cap and Trade Bill that would have taxed fossil fuels to help empower the Democrats' environmental agenda that year.

Since that victory, Manchin has maintained a consistent pattern of behavior: Every election year, pledge to "take on" the Democrats from within his party, oppose their lurch to the radical Left, and then consistently vote with Chuck Schumer in the intervening years.

He voted with Democrats on the critical opportunity to repeal Obamacare in 2017 (he said it wasn't the best way to kill the Affordable Care Act) and he voted to impeach President Donald Trump. He endorsed Hillary Clinton even though her pledge to end coal jobs would have sent legions of West Virginians to the unemployment line (he now admits his Clinton endorsement was "a mistake").

He voted against Trump's popular and effective tax cut law and Supreme Court Justice Amy Coney Barrett, even though he claimed at the time his vote was not against the justice but "against a precedent," referring to the timeline of the confirmation process.

In short, Manchin has been able to win and maintain his lofty position as a US senator by promising West Virginians he'd oppose the radical nature of his party. Yet when the chips are down and his vote is needed, he generally falls in line with Schumer, Bernie Sanders and Elizabeth Warren.

Until now, he's had the luxury of his vote melding into the pack and not being consequential in any way. Those days are over.

This week, Manchin has been flexing his ideological muscles. In two serious interviews (with Fox News and Salena Zito), Manchin reiterated his independence from the radical Left dominating the Democrats.

WATCH: Many Americans have been led to believe that the Democratic Party is the party of socialism, the Green New Deal and Medicare for All, and that’s absolutely not who we are. This falsehood has scared the bejeezus out of people. Do not believe these Republican scare tactics. pic.twitter.com/IwPoP9rt7y

Defund the police? Defund, my butt. I'm a proud West Virginia Democrat. We are the party of working men and women. We want to protect Americans' jobs & healthcare. We do not have some crazy socialist agenda, and we do not believe in defunding the police. https://t.co/EIFHX5OQ37

Townhall's Katie Pavlich points out the reaction to Manchin's very West Virginian stance on the Green New Deal and on pulling funding and political support from police officers. Rep. Alexandria Ocasio-Cortez, the iconic representation of the socialist energy leading the Democrats' charge, tweeted out a picture of herself (she does that a lot) delivering a stare of death at Manchin.

AOC (are we allowed to call her that?) would have the Democrats defund the police, pack the Supreme Court, "reform" the entire Federal Judiciary to favor a whole slate of anticipated Biden appointees, and most significantly to Manchin, she would enact the Green New Deal given the slimmest opportunity.

The lines have been drawn, and now, Manchin has the opportunity to take a significant, not symbolic stand.

Manchin should walk into Sen. Chuck Schumer's office and demand an influential and pivotal position in leadership so he can have the power to direct the Democrats' agenda. If Schumer hedges, the message is clear: Manchin is not welcome in his own party.

Manchin should then leave Schumer's office, walk right into Sen. Mitch McConnell's office and pledge his fealty to his true ideological home: The Republican Party.

By moving to the Republican Party, Manchin will immediately be the most important person in that body. He will secure a GOP majority and thus fulfill his stated goal: To be a barrier to the steamroll effect of his party's radical agenda. If the Senate falls into Schumer's hands, it's AOC's agenda that will prevail, not Manchin's.

And he knows it.

Let's face it, Manchin is a Republican. His state is Republican. It's time to be bold, be consequential and actually make a difference.

Time for Manchin to man up.