Larry Kudlow
|
Posted: Oct 01, 2016 12:01 AM
Share   Tweet
The opinions expressed by columnists are their own and do not necessarily represent the views of Townhall.com. 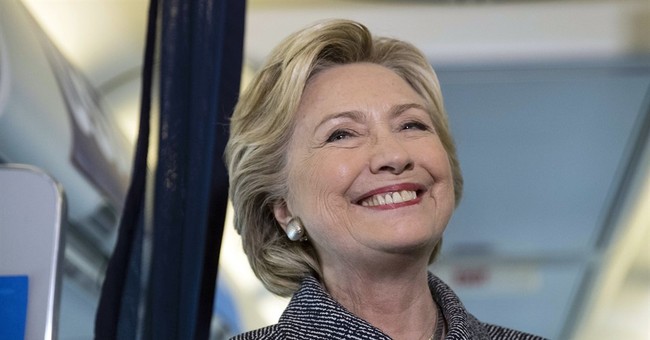 Trending
You've got to hand it to Team Hillary Clinton. Its message discipline is awesome -- at least in terms of taxes. It reminds me of the orderly march of the Chinese Red Army on the way to battle.

Here's the latest message: The George W. Bush tax cuts were responsible for the financial meltdown and recession of 2008-09. That's a new low for Hillarynomics.

In this week's debate, Clinton said: "Trickle-down it did not work. It got us into the mess we were in in 2008 and 2009. Slashing taxes on the wealthy hasn't worked."

OK. So in 2003, President Bush got a modest reduction in the top income tax rate and bigger reductions in the tax rates on capital gains and dividends. And this caused the financial crisis? How it did is virtually unknowable.

My pal, American Enterprise Institute scholar Jim Pethokoukis, who's no Trump supporter, put it like this: "Wouldn't the George W. Bush tax cuts -- most of which President Obama extended -- have stimulated demand and/or improved supply-side incentives to work, save and invest?"

Pethokoukis cited an AEI study on inequality that found "strong evidence linking credit booms to banking crises, but no evidence that rising income concentration was a significant determinant of credit booms." He also pointed out that the Financial Crisis Inquiry Commission report blamed banks, regulators, government agencies and credit raters for the recession.

I would add to this list of culprits a boom-and-bust Federal Reserve policy, where interest rates were held too low for too long. And let's add federal housing mandates that virtually eliminated income and job qualifications for loans, as well as highly overleveraged bank mortgage loans and derivatives.

But not the Bush tax cuts.

Back to Hillary's Red Army. In recent debates with pro-Clinton economists, several of whom are good friends, I heard the same accusations -- Bush and his so-called tax cuts for the rich are to blame.

Let me pull out my list of Clinton tax hikes: a $350 billion income tax increase in the form of a 28-percent cap on itemized deductions (without lowering personal tax rates); a more-than $400 billion "fairness" tax hike in the form of a 4 percent "surcharge" on high-end earners; and the "Buffet rule," which would establish a 30-percent minimum tax on earners with adjusted gross incomes over $1 million.

Clinton also proposes increasing the estate tax rate to a range of 45 to 65 percent and reducing the exemption to $3.5 million.

Remember, estate taxes are already hit once by the income tax, and again by the capital-gains tax. Here, Clinton would end the stepped-up capital gains tax basis and instead value the gain all the way back to the initial transaction.

One of my favorite economists, Scott Grannis, calls this legalized theft.

Clinton would also raise the capital gains tax to over 40 percent, unless gains are held for more than six years; cap various business deductions (without lowering the corporate rate); and install some sort of exit tax for corporate earnings overseas (which are overseas to avoid the high corporate rates she will not reduce).

Then, there's her proposed tax on stock trading, her attraction to a payroll tax hike, her openness to a carbon tax, and her endorsement of a steep soda tax and a 25 percent national gun tax.

If this list does not constitute across-the-board tax hikes, I don't know what would.

Now, contrast this with Trump's plan to reduce tax rates for individuals and large and small businesses (while abolishing the death tax).

His new 15 percent corporate tax-rate plan would unleash overseas-profits repatriation and a huge surge in corporate investment. By itself, the business tax reform could grow the economy by 4 percent.

But Trump has to be more persuasive. He could highlight how middle-income wage earners benefit most from lower business taxes. He could emphasize his tax cut on small mom-and-pop businesses. He could explain that lower individual tax rates boost what President Ronald Reagan called "take-home pay" -- more money in your pocket. He could stress how lower business taxes lead to a large increase in incentives that boost investment, productivity, risk-taking, new business formation and worker wages.

The biggest issue in this campaign is the economy/wages/jobs. Trump must hammer home how his plan to boost all three contrasts drastically with Hillary's Red Army march of tax-hike destruction.

He has a prosperity plan. She has a recession plan.

Americans will always vote for prosperity. But the case has to be made.