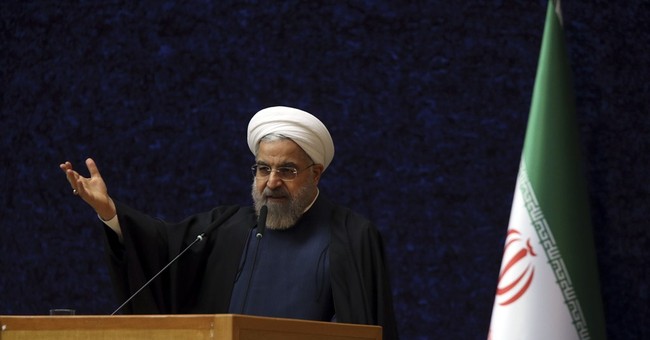 Trending
If recent news accounts are to be believed, the framework of agreement between the U.S. and Iran is on the rocks. Iran's top officials, Supreme Leader Ali Khamenei and President Hassan Rouhani, are saying economic sanctions must end immediately and that U.N. inspectors will not be granted unfettered access to military installations and nuclear construction sites.

But this may be nothing more than Iranian domestic political spin. And as long as there's a potential deal, a critical point needs to be made: There is no provision for, or even discussion of, putting political restraints on Iran. That is, there is nothing in this deal that would force Iran to change its terrorist ways. Iran will continue to be the No. 1 state sponsor of terrorism in the Middle East, no matter what the deal.

Writing in the Wall Street Journal, Henry Kissinger and George P. Shultz make a crucial point: "Absent the linkage between nuclear and political restraint, America's traditional allies will conclude that the U.S. has traded temporary nuclear cooperation for acquiescence to Iranian hegemony."

Put another way, there could be a U.S.-Iran deal that postpones Iran's nuclear weaponization for 10 or more years. But tomorrow, and the day after, and the day after that, Iran will continue to sponsor its terrorist proxies, like Hamas in Gaza and Hezbollah in Lebanon, keep proxy troops in Syria, continue its efforts to take over Iraq, further its designs on Yemen and confront Sunni Saudi Arabia. And don't forget, the U.S. has labeled Iran's own Quds Force and Revolutionary Guard as terrorists.

Kissinger and Shultz write, "Iranian or Iranian client forces are now the pre-eminent military or political element in multiple Arab countries. ... With the recent addition of Yemen as a battlefield, Tehran occupies positions along all of the Middle East's strategic waterways and encircles archrival Saudi Arabia, an American ally."

No one doubts these facts. Iran wants to dominate the Middle East. And it will not acknowledge the rights of the sovereign state of Israel. So the question is: Why is the U.S. not including political- and terrorist-restraint clauses in any Iran deal?

This is why economic sanctions are crucial. Western-nation sanctions are slowly but surely smashing the Iranian economy. We have effectively stopped the flow of money and oil for Iran. The Iranian budget, which dominates the state-run economy, needs $130 a barrel. Today's $50 price is an economic killer.

So why doesn't Team Obama directly link a removal of economic sanctions with a clear pullback of Iran's terrorist activities and march to Middle East dominance? That's a daily linkage -- one that is observable. And since we know Iran won't agree to this, why aren't President Obama and Secretary of State John Kerry working to tighten sanctions on Iran rather than push through a bad nuke deal?

Make no mistake, the nanosecond sanctions are lifted U.S. and Western investment will pour into Iran. Looser financial sanctions will put an estimated $50 billion into Iran's economy. And a number of European oil companies will jump to develop the world's fourth-largest proven oil reserve and second-biggest national-gas reserve.

Italy's Eni, Royal Dutch Shell, France's Total, Norway's Statoil, Germany's Siemens and French car companies Peugeot and Citroen are ready to move. It's reported that Boeing is looking to do business in Iran. HP and Google have been exploring contracts and licenses in Iran. Other major U.S. and European Internet companies have been approached by Iranian officials. And financial-service and credit card companies will move in quickly.

And if American officials really believe treaty violations can be countered by a "snap-back," they'd better think again. These complex sanctions, which took so long to put together, will never be effectively revived.

Gen. Jack Keane believes President Obama has had a grand-bargain vision for Iran since 2009. The nuclear deal is just one part of it. That's why Obama gave no help to the million Iranian reformers who marched in protest of the phony 2009 elections. That's why Obama didn't help the Syrian rebels, why he's had such a cold relationship with Israel, why he gave speeches blaming America for Arab unrest and why until very recently he didn't give any help to Egyptian president al-Sisi.

Obama believes in detente with Iran as a pathway to U.S. disengagement from the region. But Iran is our enemy, whether the president believes it or not. And if we cut deals that allow Iran to continue its terrorist and hegemonic activities, the Obama administration will have created an unbelievable Middle East powder keg, setting the stage for a conflict that could possibly dwarf any we've seen before.

This is the worst U.S. foreign policy of my lifetime. It may be the worst in American history.