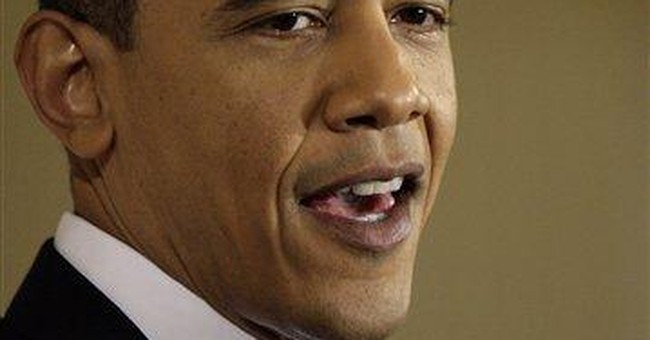 Rather than a post-partisan olive branch to congressional Republicans and the American public, President Obama’s latest health-care speech was a declaration of war. He’s more than willing to use a 51-vote reconciliation majority to jam through a roughly $2 trillion health-care plan that amounts to a government takeover of nearly one-fifth of the economy. He’s prepared to stick Uncle Sam right in the middle of the age-old relationship between patients and doctors, and doctors and hospitals, all while subjugating the private health-care insurance system to the status of a government-run utility -- without bending the cost curve downward.

One of the most galling features of this plan is a taxpayer-subsidized government-insurance entitlement for people earning up to 400 percent above the poverty line, or nearly $100,000 for a family of four. In other words, a middle-class health-care entitlement that will add millions of people to the federal dole. It’s all too reminiscent of the political dictum of the old New Dealer Harry Hopkins: tax and tax, spend and spend, elect and elect.

The spending has been well chronicled by congressman Paul Ryan, who baffled President Obama at the so-called health-care summit with his cogent analysis of a ten-year cost of $2.3 trillion that sets a floor, rather than ceiling, for the likely expense of this entitlement package. Obama had no rebuttal.

On taxing, let’s not forget that the current health-care payroll tax of 2.9 percent will be expanded to cover all forms of investment and capital formation, on top of the repeal of the Bush tax cuts. The anti-growth consequences are incalculable. As the late Jack Kemp used to say, you can’t have capitalism without capital.

The White House says job creation is priority number one. But you can’t have new jobs without healthy businesses. And healthy businesses require investment. However, by taxing investment more we’ll get fewer jobs, reduced real wages, and slower economic growth.

And how stupid is it for the president to support a six-month payroll-tax cut for small businesses in the name of job creation while imposing a 1 percent permanent increase in that very same tax to fund the massive new health-care entitlement. Talk about self-defeating.

Oh, by the way, a government takeover of health care will cripple one of our most productive job-creating sectors. Over the deep two-year recession, while overall corporate payrolls fell by about 7.5 million, private health-care firms created almost 700,000 new jobs.

And the health-care industry is one of our fastest-growing, most technologically advanced areas. With constant breakthroughs in biotech, pharmaceuticals, medical equipment, and diagnostics, the growing demand for more health care could elevate this prosperous job-creating sector to a third of the economy in the decades ahead. What’s wrong with that? Why crush it?

Health-care reform was supposed to be about getting 10 million low-income, chronically uninsured people some health insurance. But that can be solved by playing small ball. Health-care reform also was supposed to slow down cost increases. But that will never happen until the third-party payment system, run by Big Government and Big Business, is replaced by true consumer choice and market competition.

Just give consumers the tax break, and let them shop across state lines to find the right insurance plan. And young people who are already paying taxes into Medicare should not be mandated to pay more taxes into this entitlement plan. The young will pay for health insurance when they’re ready to pay for it.

Clearly this new New Deal, or new Great Society, or whatever it is, is the government selling a product that the rest of the country doesn’t want. Ironically, polls show that roughly 80 percent of voters believe their health insurance is satisfactory, good, or excellent. Polls even show that the public knows that a simple majority vote on reconciliation is an insufficient check on runaway government.

The Byrd rule says that reconciliation is for budget control and deficit reduction. But the Obama Democrats think they can use reconciliation to install a massive new social policy that would emulate the socialist-labor entitlement state now prevalent in Western Europe. As the Greece crisis amply shows, that entitlement state is on the verge of bankruptcy.

Perhaps Obama’s throwing down the gauntlet on nationalized health care will be the political gift that keeps on giving, in terms of political regime change come November. But if Obamacare does pass, a future rollback will be very difficult, and American health care and economic prosperity will be put in grave jeopardy.