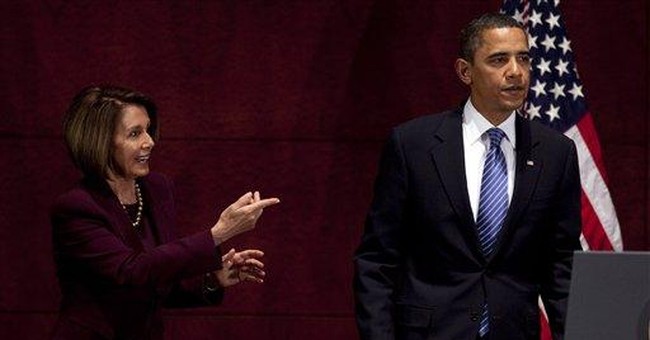 Who's being rewarded? Obama's bank-tax penalty is being used to finance the failed government takeovers of GM, GMAC, and Fannie and Freddie. And let's not forget the $75 billion failure of the so-called foreclosure loan-modification program. To this day, no one knows where that money went. But the big banks are going to be forced to finance this through a tax that will damage lending, stockholders and consumers.

This is sheer political favoritism. Crony capitalism at its worst, with a sub-theme of bailing out Obama's Big Labor political allies. It's just like his bailout of the unions by exempting them from the so-called Cadillac insurance tax until 2018, all while the rest of us may have to suffer under that tax.

Speaking of political unfairness and favoritism, mortgage giants Fannie and Freddie will not pay a nickel of this tax. These government-sponsored enterprises were at the very center of the financial maelstrom, financing the government's quotas and targets for unaffordable mortgages.

Think about this for a second. President Obama is out there bashing away at excessive bonuses. And yet Fannie and Freddie's CEOs stand to make $6 million in the next year or two. Huh? These are big-government-owned bureaucrats. They ought to be paid like GS-18s.

Of course, the Federal Reserve, which is having its most profitable year ever, was probably the main culprit in all this, with its negative-real-interest-rate easy-money policy, which amounted to throwing red meat to a pack of sharks in the deepest waters. But this tax punishes and penalizes the biggest banks -- institutions that have already met their obligations by paying down TARP, with interest, and by providing taxpayers with a tidy profit on the stock warrants they held.

Now, this is not to condone the major mistakes made by the big banks. They were overleveraged, borrowed way too much and sold highly flawed mortgage bonds and other complex derivatives. And the banks should not be paying big bonuses for 2009 -- not for the period during which they were TARPed. That's their biggest mistake.

With the banks having paid down TARP, however, the U.S. government should not be waging war against them. Somebody ought to tell the White House that al-Qaida is the real enemy, not the banks.

At the same time, taxing the living hell out of the banks will not promote economic recovery and long-term prosperity.

President Obama says he wants to stop risky bets. Well, look, the way to accomplish that is through higher capital requirements, stricter limits on leveraged borrowing and an end to the policy of "too big to fail." Across-the-board FDIC insurance assessments are a much better way of maintaining a bank safety net.

Instead, Team Obama wants to place a 15-basis-point tax on the banks, essentially layering it on non-insured bank funding. It amounts to a tax on future lending, shareholder equity value and the consumers of bank services who will pay the tax costs passed on by the banks. It's just like the corporate tax: Businesses don't pay taxes, people do.

And consider this: One dollar of bank capital generally works out to around 10 dollars of potential bank loans. That means this $90 billion tax proposal could very well cut off a staggering $1 trillion of future bank lending when credit demand picks up.

That's how this works. This tax will slow down profits and capital. And the diminished capital will mean fewer loans when loan demand picks up. It's exactly the reverse of what we need to grow our economy.

And the unfairness continues. Insurer MetLife, a bank holding company, and the regional Hudson City Bank Corp., both of which never took a dime of TARP money, will be penalized by this tax. That just ain't fair.

President Obama's crony politics rewards losers and penalizes winners. He is engaging in sheer, raw, left-wing class-warfare politics. It's yet one more reason why the Democrats are going to get clobbered at the polls come November.

Voters know a smoked turkey when they see one. Remember, you can fool some of the people some of the time, but you can't fool all the people all the time.

Mark my words, all of this left-wing demagoguery, political favoritism and crony capitalism will not end well for the Obama Democrats.