If You Broke it, You Own it

Larry Kelley
|
Posted: Mar 16, 2016 12:01 AM
Share   Tweet
The opinions expressed by columnists are their own and do not necessarily represent the views of Townhall.com. 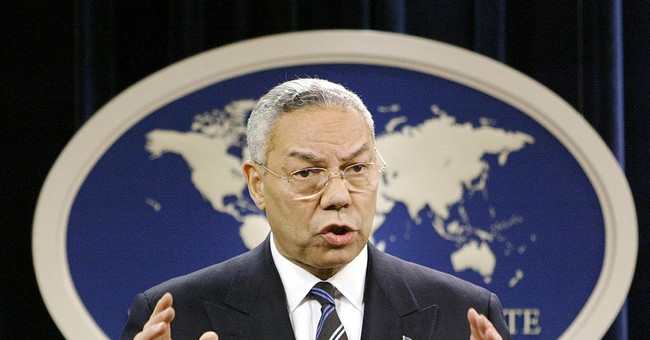 At the outset of the first Iraq war, Colin Powell warned President Bush 41 that he saw no exit strategy for the U.S. if our forces pursued Iraqi troops from Kuwait all the way to Baghdad. He followed his warning with an admonition that has become known as the “Pottery Barn” allegory and is now part of the American lexicon…. If you broke it, you own it.

The admonishment was later picked up by leftist American journalists who monotonously condemned the second Bush Administration for selling the U.S. Congress on the necessity of an invasion of Iraq when everybody knew there were no WMD’s. Colin Powell himself was eventually tarnished for his use of the phrase which only added to his culpability and subsequent role in the terrible folly that was the Iraq war.  At least it did so in the minds of New York Times readers.

The following condemnation of Powell was written by the uber progressive, Lance Simmons at the Huffington Post, is typical, “This is the man that has warned that if we break it we own it. Incredibly enough, however, this is the same individual who took center stage at the United Nations, fully equipped with false props and specious documentation to tell the international community that there was incontrovertible evidence that Saddam Hussein did in fact possess weapons of mass destruction. Well he is certainly right about one thing, we broke Iraq and now we own it.”

Now we fast forward to the ouster of Libya’s strongman, Muammar Qaddafi.  In October of 2011, his convoy was bombed by NATO aircraft, forcing him to hold up in the City of Sirte.  There he was captured and killed, on camera, by knife wielding rebels. Today the city of Sirte, is the capital of ISIL, that is, the Islamic State in Libya. With the Arab Spring still a young phenomenon, both President Obama and then Secretary of State were staunch yet grossly naive advocates of Qaddafi’s overthrow.  So much so that Obama requested from Congress an authorization of force to lead the effort. Congress refused to put the most anti-military U.S. president ever in charge of a new theater of conflict and voted against it.  Neglecting the will of the peoples’ representatives, Obama went ahead and sent U.S. warplanes to aid in the NATO air campaign anyway.

When photos of Qaddafi’s body, lying lifeless in a Tripoli morgue were broadcast across the globe, the Obama Administration was jubilant and wanted to take some credit.  An unnamed administration spokesman made a boast to the press which will, like Powell’s “pottery-barn” comment, live on to serve as the apt characterization of the now repudiated Obama foreign policy doctrine.  He said of the Libya campaign, “We led from behind.”

Unfortunately for the U.S. and for much of the rest of the world, the Obama Administration generally and Hillary Clinton specifically neglected to find out who the Libyan rebels were and what they planned to do with the revenues from one of the leading exporters of oil to the European Union. Clinton’s neglect was so total that she not only refused to honor her ambassador, Chris Stephens, repeated requests for greater security, but she actually reduced his security personnel. Ten months later, on the eleventh anniversary of 9/11, an al Qaeda affiliate, Ansar al Sharia, stormed our consulate in Benghazi, killed our ambassador and four security contractors who disobeyed orders to “stand down,” and ransacked the mission.

This would be only the beginning of the Libyan debacle. Today it is not only a failed state, it is home to al Qaeda loyalist brigades such as the one who overran our consulate as well as IS in Libya. It is also the home to ISIS which, on February 15, 2015 captured a group of 21 Coptic Christians from Egypt, working in Libya, and marched them out to the beach and beheaded them on camera for all of the world to see. As in Syria, in Libya, there are multiple warring factions.  There are two rump governments, one centered Tobruk and the other in Tripoli.  Sirte and its surrounding environs are shared by the Islamic State and al-Qaeda linked terrorists with yet unknown alliances and plans for the conquest of the infidel.

But if that were not bad enough, America’s inability to lead a post Qaddafi Libya has set off a domino effect which saw the creation of many new terrorist organizations such al Qaeda in Mali and Boko Haram in Nigeria as well as others across the breadth of sub Saharan Africa. Worse yet, some of the rival terrorist organizations are aligning. In January of 2016 Boko Haram declared allegiance to the Islamic State and with cross training has improved its road-side bombing techniques and procured new weapons. It then promptly accelerated its campaign of almost daily suicide bombings. In that same month it killed 86 people, many children, in the Nigerian village of Dalori and 32 others in the Cameroon village of Bodo.

As the Wall Street Journal’s senior Middle East correspondent, Yaroslav Trofimov put it, “Africa is now crisscrossed by war zones stretching from the Indian Ocean to the Atlantic…For centuries, the continent’s mode of Islam was moderate and open to local custom. Now sub-Saharan Africa is at risk of becoming global jihad’s deadliest front.”

In a very literal sense, both Clinton and Obama were important participants in the breaking of Qaddafi’s Libya.  And forever, given their gross incompetence, they will own it dreadful aftermath.