Larry Elder
|
Posted: Dec 20, 2018 12:01 AM
Share   Tweet
The opinions expressed by columnists are their own and do not necessarily represent the views of Townhall.com. 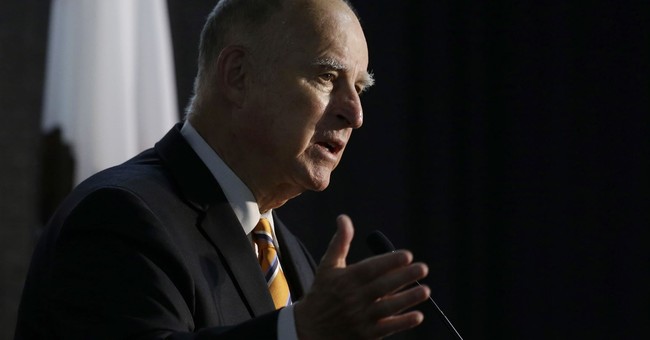 Outgoing California Gov. Jerry Brown recently said, "The weakness of the Republican Party has let the Democratic Party, I think, go get further out than I think the majority of people want." When a tax-spend-and-regulate Democrat who signed legislation making California the first "sanctuary state" says the Democrats have gotten too "further out" for the majority, that party would be wise to take notice. In the November elections, California Democrats won veto-proof supermajorities in both chambers of state government. No Republican currently holds an elected state-wide office.

Brown seems to recognize that there are only so many "rich" people and that one doesn't become rich by being too stupid to know that the rich have options. California has the highest state income tax in the country, with a top marginal rate of 13.3 percent. Even left-wing, Trump-hating California resident Bill Maher complained about the state's high income taxes in 2013: "ln California, I just want to say: Liberals, you could actually lose me. ... Rich people ... actually do pay the freight in this country ... like 70 percent" of the taxes.

As to who bears responsibility for the Democratic lurch to the left, Brown blames Republican "weakness." Follow that? Republican "weakness" practically forced the Democrats to pursue a hard-left agenda: abolishing Immigration and Customs Enforcement and pursuing "Medicare-for-all," $15 minimum wage, tuition-free college, and climate change alarmism.

Brown is warning the Democrats that President Donald Trump's agenda is closer to what Americans want than that of Alexandria Ocasio-Cortez, the House's newly elected self-described socialist. And Brown is looking at results. Even the international community is grudgingly acknowledging the merits of Trump's positions.

Take, for instance, Trump's actions against China over the country's theft of intellectual property and the forced transfer of proprietary technology as a condition of doing business. Nicolas Chapuis, the EU ambassador of China, also recently sounded downright Trumpian while complaining of this practice: "This has to stop or to be regulated ... so that there is no so-called 'forced tech transfer.'"

The Europeans are echoing Trump's concerns about Iran that caused the U.S. to withdraw form the Iran deal. "Not only does the deal fail to halt Iran's nuclear ambitions," Trump said in explaining the withdrawal, "but it also fails to address the regime's development of ballistic missiles that could deliver nuclear warheads." Three weeks ago, Iran again test-fired a medium-range missile, capable of carrying multiple warheads and striking anywhere in the Middle East and parts of Europe. This alarmed the U.K., Germany and France, whose foreign ministry said, "(France) condemns this provocative and destabilizing action."

As for climate change, France's Emmanuel Macron lectured Trump last year on the risk of pulling out of the Paris climate agreement. Macron warned, "There is no Plan B because there is no Planet B." But Macron recently discovered a Plan B when, after days of riots in France, he agreed to suspend an unpopular climate-change gas tax that would have raised France's average price per gallon to nearly $8. In America, polls consistently rank climate change among Americans' least concerns.

As for the Democrats' push for "single-payer" health care, "Medicare-for-all" or "Sanders care," Ocasio-Cortez claims it can be paid for by ending the waste, fraud and abuse in our defense budget. The price tag for "Medicare-for-all" is generally estimated, by the Mercatus Center at George Mason University, to cost $32.6 trillion over 10 years. This year, the entire defense budget is under $700 billion. This leaves Ocasio-Cortez just a little short.

Brown senses the danger his party faces because of its blatant contempt for Trump. Mika Brzezinski, a co-host of MSNBC's "Morning Joe," criticized Secretary of State Mike Pompeo for, in her view, irresponsibly following Trump's lead in refusing to directly implicate Saudi Crown Prince Mohammed bin Salman in the murder of a Washington Post Saudi columnist. Brzezinski said: "Why doesn't Mike Pompeo care? ... Are the pathetic deflections that we just heard ... is that a patriot speaking? Or a wannabe dictator's butt boy?"

Two days later -- she was off the following day -- Brzezinski gave this on-air apology: "I wanted to address a term that I used on this show on Wednesday that was vulgar. ... The term is crass and offensive, and I apologize to everybody, especially the LGBTQ community and to my colleagues for using it. It was a mistake. My father would have found it so unbecoming and disrespectful, and he would have told me. I will work hard to be better. But I just want to say on camera, looking viewers straight in the eye: I am really, really sorry." Notice anything missing? Brzezinski offered no direct apology to the target of her scorn -- Pompeo himself. There is a term for this: "Trump Derangement Syndrome."

Brown, now that he's leaving office, feels free to speak his mind. He offers his party some advice. Countering Trump with Sanders care, "free" college tuition and abolishing ICE is not the road to victory in 2020.